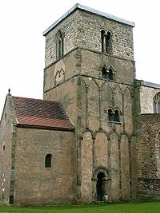 Encyclopedia
Barton-upon-Humber or Barton is a small town and civil parish
Civil parish
In England, a civil parish is a territorial designation and, where they are found, the lowest tier of local government below districts and counties...
in North Lincolnshire
North Lincolnshire
North Lincolnshire is a unitary authority area in the region of Yorkshire and the Humber in England. For ceremonial purposes it is part of Lincolnshire....
, England
England
England is a country that is part of the United Kingdom. It shares land borders with Scotland to the north and Wales to the west; the Irish Sea is to the north west, the Celtic Sea to the south west, with the North Sea to the east and the English Channel to the south separating it from continental...
located on the south bank of the Humber Estuary, and at the end of the Humber Bridge
Humber Bridge
The Humber Bridge, near Kingston upon Hull, England, is a 2,220 m single-span suspension bridge, which opened to traffic on 24 June 1981. It is the fifth-largest of its type in the world...
. It lies 46 miles (74 km) east of Leeds
Leeds
Leeds is a city and metropolitan borough in West Yorkshire, England. In 2001 Leeds' main urban subdivision had a population of 443,247, while the entire city has a population of 798,800 , making it the 30th-most populous city in the European Union.Leeds is the cultural, financial and commercial...
, 6 miles (10 km) southwest of Hull
Kingston upon Hull
Kingston upon Hull , usually referred to as Hull, is a city and unitary authority area in the ceremonial county of the East Riding of Yorkshire, England. It stands on the River Hull at its junction with the Humber estuary, 25 miles inland from the North Sea. Hull has a resident population of...
and 31 miles (50 km) north northeast of the county town
County town
A county town is a county's administrative centre in the United Kingdom or Ireland. County towns are usually the location of administrative or judicial functions, or established over time as the de facto main town of a county. The concept of a county town eventually became detached from its...
of Lincoln
Lincoln, Lincolnshire
Lincoln is a cathedral city and county town of Lincolnshire, England.The non-metropolitan district of Lincoln has a population of 85,595; the 2001 census gave the entire area of Lincoln a population of 120,779....
. The town was formerly an important centre for the manufacture of bicycles, Hopper's Cycles being established in the town in 1880 in the Hopper Building. Other nearby towns include Scunthorpe
Scunthorpe
Scunthorpe is a town within North Lincolnshire, England. It is the administrative centre of the North Lincolnshire unitary authority, and had an estimated total resident population of 72,514 in 2010. A predominantly industrial town, Scunthorpe, the United Kingdom's largest steel processing centre,...
to the southwest and Grimsby
Grimsby
Grimsby is a seaport on the Humber Estuary in Lincolnshire, England. It has been the administrative centre of the unitary authority area of North East Lincolnshire since 1996...
to the southeast.
The civil parish of Barton-Upon-Humber includes the hamlet
Hamlet
The Tragical History of Hamlet, Prince of Denmark, or more simply Hamlet, is a tragedy by William Shakespeare, believed to have been written between 1599 and 1601...
of Beaumontcote which lies about 2 miles (3.2 km) to the south of the town.

The town is the northern terminus at Barton station
Barton-on-Humber railway station
Barton-on-Humber railway station serves the town of Barton-upon-Humber in North Lincolnshire, England.The station, which was once the terminus of a branch line from New Holland, is nowadays the terminus of the Barton Line services operating from Cleethorpes. It is situated west of the resort...
of a branch line (Barton – Cleethorpes)
Barton Line
The Barton Line is a railway line in North and North East Lincolnshire. It runs from Barton-upon-Humber south east to Cleethorpes and was designated by the Department for Transport as a community rail line in February 2007....
, opened in 1849, from Grimsby
Grimsby
Grimsby is a seaport on the Humber Estuary in Lincolnshire, England. It has been the administrative centre of the unitary authority area of North East Lincolnshire since 1996...
and Cleethorpes
Cleethorpes
Cleethorpes is a town and unparished area in North East Lincolnshire, England, situated on the estuary of the Humber. It has a population of 31,853 and is a seaside resort.- History :...
. Services are provided by Northern Rail
Northern Rail
Northern Rail is a British train operating company that has operated local passenger services in Northern England since 2004. Northern Rail's owner, Serco-Abellio, is a consortium formed of Abellio and Serco, an international operator of public transport systems...
. The A15 passes to the west of the town cutting through the Beacon Hill, and has a junction with the A1077 Ferriby
South Ferriby
South Ferriby is a village in North Lincolnshire, England situated on the south bank of the Humber Estuary 5 km west of the Humber Bridge and directly opposite North Ferriby on the Estuary’s north bank. It currently has a population of around 600 people.-History:It dates back at least to Roman...
Road. The B1218 passes north-south through the town, and leads to Barton Waterside
Barton Waterside
Barton Waterside is a village in North Lincolnshire, England.Barton Waterside consists of the former port area at the north end of Barton-upon-Humber. The Community is centred on Barton Haven - a late Anglo-Saxon artificial harbour - which was dug c.1000 AD to create a reliable deep water port...
eventually. Kimberly-Clark
Kimberly-Clark
Kimberly-Clark Corporation is an American corporation that produces mostly paper-based consumer products. Kimberly-Clark brand name products include "Kleenex" facial tissue, "Kotex" feminine hygiene products, "Cottonelle", Scott and Andrex toilet paper, Wypall utility wipes, "KimWipes"...
have a factory on Falkland Way close to the railway, which is known to them as their Barton Plant. This area is known as the Humber Bridge Industrial Estate.

Barton is on the south bank of the Humber
Humber
The Humber is a large tidal estuary on the east coast of Northern England. It is formed at Trent Falls, Faxfleet, by the confluence of the tidal River Ouse and the tidal River Trent. From here to the North Sea, it forms part of the boundary between the East Riding of Yorkshire on the north bank...
estuary and is at the southern end of the Humber Bridge
Humber Bridge
The Humber Bridge, near Kingston upon Hull, England, is a 2,220 m single-span suspension bridge, which opened to traffic on 24 June 1981. It is the fifth-largest of its type in the world...
. The Viking Way
Viking Way
The Viking Way is a long distance footpath in England running between the Humber Bridge in North Lincolnshire and Oakham in Rutland. The Countryside Commission recognised the significance of the Viking Way as a high quality long distance walk linking other major routes in Eastern England, these...
starts near the bridge.

The town is known for its Saxon church tower
Bell tower
A bell tower is a tower which contains one or more bells, or which is designed to hold bells, even if it has none. In the European tradition, such a tower most commonly serves as part of a church and contains church bells. When attached to a city hall or other civic building, especially in...
of St Peter's
St Peter's Church, Barton-upon-Humber
St Peter's Church is the former parish church of Barton-upon-Humber in North Lincolnshire, England. It is one of the best known Anglo-Saxon buildings, in part due to its role in Thomas Rickman's identification of the style. It has been subject to major excavations, which are the most...
, and there have been many Saxon archaeological
Archaeology
Archaeology, or archeology , is the study of human society, primarily through the recovery and analysis of the material culture and environmental data that they have left behind, which includes artifacts, architecture, biofacts and cultural landscapes...
finds within the town. The former church was reopened in May 2007 as a centre for medical research into the development of diseases, and ossuary
Ossuary
An ossuary is a chest, building, well, or site made to serve as the final resting place of human skeletal remains. They are frequently used where burial space is scarce. A body is first buried in a temporary grave, then after some years the skeletal remains are removed and placed in an ossuary...
, containing the bones and skeleton
Skeleton
The skeleton is the body part that forms the supporting structure of an organism. There are two different skeletal types: the exoskeleton, which is the stable outer shell of an organism, and the endoskeleton, which forms the support structure inside the body.In a figurative sense, skeleton can...
s of some 3,750 people whose remains were removed between 1978 and 1984 from the 1,000 year old burial site, after the Church of England
Church of England
The Church of England is the officially established Christian church in England and the Mother Church of the worldwide Anglican Communion. The church considers itself within the tradition of Western Christianity and dates its formal establishment principally to the mission to England by St...
made the church redundant in 1972.

A ferry to Hull began in 1351, being granted by Edward II
Edward II of England
Edward II , called Edward of Caernarfon, was King of England from 1307 until he was deposed by his wife Isabella in January 1327. He was the sixth Plantagenet king, in a line that began with the reign of Henry II...
running until 1851, but this was superseded by a ferry at New Holland
New Holland, North Lincolnshire
New Holland is a small village, civil parish and port on the Humber estuary in the Borough of North Lincolnshire in Lincolnshire, England. It has a population of 955.-History:...
which began in 1820.

There are two churches in Barton-upon-Humber, St Peter's
St Peter's Church, Barton-upon-Humber
St Peter's Church is the former parish church of Barton-upon-Humber in North Lincolnshire, England. It is one of the best known Anglo-Saxon buildings, in part due to its role in Thomas Rickman's identification of the style. It has been subject to major excavations, which are the most...
and St Mary's. Unusually for large mediaeval churches in a small town, they are located only about five hundred feet apart. St Peter's is a large, mostly Anglo-Saxon
Anglo-Saxon
Anglo-Saxon may refer to:* Anglo-Saxons, a group that invaded Britain** Old English, their language** Anglo-Saxon England, their history, one of various ships* White Anglo-Saxon Protestant, an ethnicity* Anglo-Saxon economy, modern macroeconomic term...
, church and predates St Mary's — which may have originated as a chapel
Chapel
A chapel is a building used by Christians as a place of fellowship and worship. It may be part of a larger structure or complex, such as a church, college, hospital, palace, prison or funeral home, located on board a military or commercial ship, or it may be an entirely free-standing building,...
on the original market place, enlarged and increasing in importance as the town's trade thrived in the 12th and 13th centuries.

Baysgarth School is a in-comprehensive school for ages 11–18 on Barrow Road. There are also three primary schools, St Peter's Church of England, on Marsh Lane, the Castledyke Primary School (was Barton County School) on the B1218, and the Bowmandale primary school in the south of the town. Barton Grammar School, which opened in 1931, used to be on Caistor Road. Henry Treece
Henry Treece
Henry Treece was a British poet and writer, who worked also as a teacher, and editor. He is perhaps best remembered now as a historical novelist, particularly as a children's historical novelist, although he also wrote some adult historical novels.-Life and work:Treece was born in Wednesbury,...
, the poet and author, was a teacher at the Grammar School.