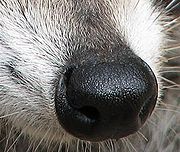 A nostril is one of the two channels of the nose
Nose
Anatomically, a nose is a protuberance in vertebrates that houses the nostrils, or nares, which admit and expel air for respiration in conjunction with the mouth. Behind the nose are the olfactory mucosa and the sinuses. Behind the nasal cavity, air next passes through the pharynx, shared with the...
, from the point where they bifurcate to the external opening. In bird
Bird
Birds are feathered, winged, bipedal, endothermic , egg-laying, vertebrate animals. Around 10,000 living species and 188 families makes them the most speciose class of tetrapod vertebrates. They inhabit ecosystems across the globe, from the Arctic to the Antarctic. Extant birds range in size from...
s and mammal
Mammal
Mammals are members of a class of air-breathing vertebrate animals characterised by the possession of endothermy, hair, three middle ear bones, and mammary glands functional in mothers with young...
s, they contain branched bones or cartilages called turbinate
Turbinate
In anatomy, a nasal concha is a long, narrow and curled bone shelf that protrudes into the breathing passage of the nose...
s, whose function is to warm air on inhalation and remove moisture on exhalation. Fish
Fish
Fish are a paraphyletic group of organisms that consist of all gill-bearing aquatic vertebrate animals that lack limbs with digits. Included in this definition are the living hagfish, lampreys, and cartilaginous and bony fish, as well as various extinct related groups...
do not breathe through their noses, but they do have two small holes used for smelling
Olfaction
Olfaction is the sense of smell. This sense is mediated by specialized sensory cells of the nasal cavity of vertebrates, and, by analogy, sensory cells of the antennae of invertebrates...
which may be called nostrils.

In human
Human
Humans are the only living species in the Homo genus...
s, the nasal cycle
Nasal cycle
The nasal cycle is the alternating congestion and decongestion of the nasal cavities in humans. It is a physiological congestion of the nasal concha due to selective activation of one half of the autonomic nervous system by the hypothalamus. It should not be confused with pathological nasal...
is the normal ultradian cycle
Ultradian
Ultradian rhythms are recurrent periods or cycles repeated throughout a 24-hour circadian day. In contrast, infradian rhythms, such as the human menstrual cycle, have periods longer than a day....
of each nostril's blood vessels becoming engorged in swelling, then shrinking.

The nostrils are separated by the septum
Nasal septum
The nasal septum separates the left and right airways in the nose, dividing the two nostrils.It is depressed by the Depressor septi nasi muscle.-Composition:The fleshy external end of the nasal septum is sometimes also called columella....
. The septum can sometimes be deviated
Deviated septum
Nasal septum deviation is a common physical disorder of the nose, involving a displacement of the nasal septum.-Causes:It is most frequently caused by impact trauma, such as by a blow to the face. It can also be a congenital disorder, caused by compression of the nose during childbirth...
, causing one nostril to appear larger than the other. In such an event, the two nostrils are no longer separated and form a single larger external opening.

Humans have two external nostrils with two additional nostrils inside the head. These internal nostrils are called "choana
Choana
Choana is the posterior nasal aperture.The choanae are separated by the vomer.- Boundaries :It is the opening between the nasal cavity and the nasopharynx....
e" and each contain approximately 1000 strands of nasal hair
Nasal hair
Nasal hair or nose hair is the hair in the nose. Its main function is to keep foreign or unwanted particles from entering the lungs through the nasal cavity...
. They also connect the nose to the throat aiding in respiration. Scientists believe they migrated back inside as evidenced by the discovery of "Kenichthys campbelli
Kenichthys
Kenichthys was an ancient tetrapodomorph, a lineage that included tetrapods. It was one of the most primitive tetrapodomorphs. This specific genus is important because it contains a primitive choana on its upper lip, giving it a cleft palate-like structure...
", a 395 million-year-old fossilized fish which shows this migration in progress. It has two nostrils between its front teeth, similar to human embryo
Embryo
An embryo is a multicellular diploid eukaryote in its earliest stage of development, from the time of first cell division until birth, hatching, or germination...
s at an early stage. If these fail to join up it causes a cleft palate.
It is possible for humans to smell different olfactory inputs in the two nostrils and experience a perceptual rivalry akin to that of binocular rivalry
Binocular rivalry
Binocular rivalry is a phenomenon of visual perception in which perception alternates between different images presented to each eye.When one image is presented to one eye and a very different image is presented to the other, instead of the two images being seen superimposed, one image is seen for...
when there are two different inputs to the two eyes.
The source of this article is wikipedia, the free encyclopedia.  The text of this article is licensed under the GFDL.