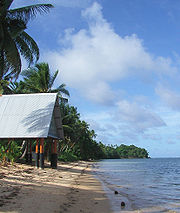 Babeldaob is the largest island in the island nation of Palau
Palau
Palau , officially the Republic of Palau , is an island nation in the Pacific Ocean, east of the Philippines and south of Tokyo. In 1978, after three decades as being part of the United Nations trusteeship, Palau chose independence instead of becoming part of the Federated States of Micronesia, a...
. Its area, 331 km² (128 mi²), makes up over 70% of the area of the entire country, and about 30% of the population, with about 6,000 people living there. Babeldoab is one of the most undeveloped populated islands in the Pacific.

Babeldaob is located northeast of Koror
Koror
Koror is the state comprising the main commercial centre of the Republic of Palau. It consists of several islands, the most prominent being Koror Island ....
and contains the site of the new national capital, Ngerulmud
Ngerulmud
Ngerulmud, a settlement in the State of Melekeok, is where the offices of the government of Palau are. The official capital is Melekeok. On 7 October 2006, government officials moved their offices in the former capital of Koror to Ngerulmud....
. Unlike most of the islands of Palau, Babeldaob is mountainous. It contains Palau's highest point, the 242 meter tall Mount Ngerchelchuus
Mount Ngerchelchuus
Mount Ngerchelchuus is the Republic of Palau's highest point, located at the border of the states of Ngardmau and Ngaremlengui, on the island of Babeldaob....
. Babeldaob's eastern coast has many sandy beaches, in particular north from Ngiwal to Ngaraard, and the island's western coast has a shoreline with many mangrove
Mangrove
Mangroves are various kinds of trees up to medium height and shrubs that grow in saline coastal sediment habitats in the tropics and subtropics – mainly between latitudes N and S...
shrubs and trees.

Babeldaob encompasses 10 of the 16 states of Palau
States of Palau
Palau is divided into sixteen administrative regions, called states .-External links:**...
, which are:

Babeldaob was the location to which 426 members of the Sokehs tribe were banished by the German Empire following the Sokehs Rebellion
Sokehs Rebellion
Sokehs Rebellion was an uprising of the Sokehs tribe against local German rule that started on Sokehs Island off the main island of Pohnpei in the Eastern Caroline Islands in 1910/1911...
on Sokehs Island and Pohnpei. Japan as mandatory power
League of Nations mandate
A League of Nations mandate was a legal status for certain territories transferred from the control of one country to another following World War I, or the legal instruments that contained the internationally agreed-upon terms for administering the territory on behalf of the League...
after World War I administered the return of the Sokehs in stages between 1917 and 1927.

During World War II
World War II
World War II, or the Second World War , was a global conflict lasting from 1939 to 1945, involving most of the world's nations—including all of the great powers—eventually forming two opposing military alliances: the Allies and the Axis...
the Japanese garrison
Garrison
Garrison is the collective term for a body of troops stationed in a particular location, originally to guard it, but now often simply using it as a home base....
was composed of 21,449 IJA
IJA
IJA can refer to:* Imperial Japanese Army* International Jugglers' Association* International Jousting Association* Instituto Justo Arosemena* The Internet Journal of Anesthesiology* International Judges Association* Empress Ija...
men under the command of Lieutenant-General Sadae Inoue and 8,286 IJN
IJN
The abbreviation IJN may refer to:* International Justice Network or IJNetwork, a Human Rights Organization* Imperial Japanese Navy, the navy of Japan from 1868 until it was dissolved in 1947* Institut Jean Nicod, a French interdisciplinary research center...
men under the command of Vice-Admiral Kenmi Itoh. Babeldaob was bypassed by the allied forces during the war.
The source of this article is wikipedia, the free encyclopedia.  The text of this article is licensed under the GFDL.