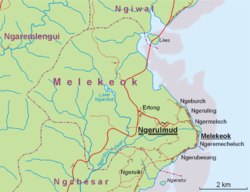 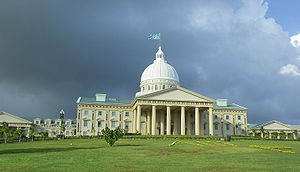 Melekeok is a town in the State of Melekeok
Melekeok State
Melekeok is a state of the Republic of Palau located on the central east coast of Babeldaob Island. The new capital of the Republic of Palau, Ngerulmud, is also located in this state...
(one of Palau
Palau
Palau , officially the Republic of Palau , is an island nation in the Pacific Ocean, east of the Philippines and south of Tokyo. In 1978, after three decades as being part of the United Nations trusteeship, Palau chose independence instead of becoming part of the Federated States of Micronesia, a...
's sixteen states
States of Palau
Palau is divided into sixteen administrative regions, called states .-External links:**...
). It is located on the east coast of Palau's largest island, Babeldaob
Babeldaob
Babeldaob is the largest island in the island nation of Palau. Its area, 331 km² , makes up over 70% of the area of the entire country, and about 30% of the population, with about 6,000 people living there...
. On October 2006, the settlement of Ngerulmud
Ngerulmud
Ngerulmud, a settlement in the State of Melekeok, is where the offices of the government of Palau are. The official capital is Melekeok. On 7 October 2006, government officials moved their offices in the former capital of Koror to Ngerulmud....
, located 2 km from the village of Melekeok, became the seat of Palau's government, replacing Koror
Koror
Koror is the state comprising the main commercial centre of the Republic of Palau. It consists of several islands, the most prominent being Koror Island ....
as Palau's capital city.

According to the 2005 census, 271 people resided in Melekeok town.