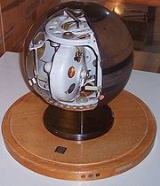 In the aircraft gyrocompassing testing and calibration, in dot and cross system, if only dot is visible or if only cross is visible in an annunciator,...

Good day, some gyro's like C. Plath and Yokogawa (vessels propossal) are working with mercury inside the gyrosphere, when changing the mercury, the me...

Good day, some gyro's (vessels propossal) are working with mercury inside the gyrosphere, when changing the mercury, the mercury is comming inside ...
More

Which systems could take a gyro output signal on board a ship? Thanks for the answer in advance.=) 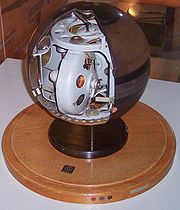 A gyrocompass­ is a type of non-magnetic compass
Compass
A compass is a navigational instrument that shows directions in a frame of reference that is stationary relative to the surface of the earth. The frame of reference defines the four cardinal directions – north, south, east, and west. Intermediate directions are also defined...
which bases on a fast-spinning disc and rotation of our planet to automatically find geographical direction. Although one of important components of a gyrocompass is a gyroscope
Gyroscope
A gyroscope is a device for measuring or maintaining orientation, based on the principles of angular momentum. In essence, a mechanical gyroscope is a spinning wheel or disk whose axle is free to take any orientation...
, these are not the same devices; gyrocompass is built to use the effect of gyroscopic precession, which is a distinctive aspect of the general gyroscopic effect. Gyrocompasses are widely used for navigation
Navigation
Navigation is the process of monitoring and controlling the movement of a craft or vehicle from one place to another. It is also the term of art used for the specialized knowledge used by navigators to perform navigation tasks...
on ship
Ship
Since the end of the age of sail a ship has been any large buoyant marine vessel. Ships are generally distinguished from boats based on size and cargo or passenger capacity. Ships are used on lakes, seas, and rivers for a variety of activities, such as the transport of people or goods, fishing,...
s, because they have two significant advantages over magnetic compasses:

A gyroscope
Gyroscope
A gyroscope is a device for measuring or maintaining orientation, based on the principles of angular momentum. In essence, a mechanical gyroscope is a spinning wheel or disk whose axle is free to take any orientation...
is a spinning wheel mounted on gimbal
Gimbal
A gimbal is a pivoted support that allows the rotation of an object about a single axis. A set of two gimbals, one mounted on the other with pivot axes orthogonal, may be used to allow an object mounted on the innermost gimbal to remain immobile regardless of the motion of its support...
so that the wheel's axis is free to orient itself in any way. When it is spun up to speed with its axis pointing in some direction, due to the law of conservation of angular momentum
Angular momentum
In physics, angular momentum, moment of momentum, or rotational momentum is a conserved vector quantity that can be used to describe the overall state of a physical system...
, such a wheel will normally maintain its original orientation to a fixed point in outer space
Outer space
Outer space is the void that exists between celestial bodies, including the Earth. It is not completely empty, but consists of a hard vacuum containing a low density of particles: predominantly a plasma of hydrogen and helium, as well as electromagnetic radiation, magnetic fields, and neutrinos....
(not to a fixed point on Earth). Since our planet rotates, it appears to a stationary observer on Earth that a gyroscope's axis is completing a full rotation once every 24 hours. Such a rotating gyroscope is used for navigation in some cases, for example on aircraft, where it is known as heading indicator
Heading indicator
The heading indicator is a flight instrument used in an aircraft to inform the pilot of the aircraft's heading. It is sometimes referred to by its older names, the directional gyro or DG, and also direction indicator or DI.- Use :The primary means of establishing the heading in most small...
, but cannot ordinarily be used for long-term marine navigation. The crucial additional ingredient needed to turn such gyroscope into a gyrocompass, so it would automatically position to true north, is some mechanism that results in an application of torque
Torque
Torque, moment or moment of force , is the tendency of a force to rotate an object about an axis, fulcrum, or pivot. Just as a force is a push or a pull, a torque can be thought of as a twist....
whenever the compass's axis is not pointing north.

One method uses friction
Friction
Friction is the force resisting the relative motion of solid surfaces, fluid layers, and/or material elements sliding against each other. There are several types of friction:...
to apply the needed torque: the gyroscope in a gyrocompass is not completely free to reorient itself; if for instance a device connected to the axis is immersed in a viscous fluid, then that fluid will resist reorientation of the axis. This friction force caused by the fluid results in a torque
Torque
Torque, moment or moment of force , is the tendency of a force to rotate an object about an axis, fulcrum, or pivot. Just as a force is a push or a pull, a torque can be thought of as a twist....
acting on the axis, causing the axis to turn in a direction orthogonal to the torque (that is, to precess) along a line of longitude. Once the axis points toward the celestial pole, it will appear to be stationary and won't experience any more frictional forces. This is because true north is the only direction for which the gyroscope can remain on the surface of the earth and not be required to change. This axis orientation is considered to be a point of minimum potential energy
Potential energy
In physics, potential energy is the energy stored in a body or in a system due to its position in a force field or due to its configuration. The SI unit of measure for energy and work is the Joule...
.

Since the gyrocompass's north-seeking function depends on the rotation around the axis of the Earth that causes torque-induced gyroscopic precession, it will not orient itself correctly to true north if it is moved very fast in an east to west direction, thus negating the Earth's rotation. However, aircraft commonly use heading indicators or directional gyros
Heading indicator
The heading indicator is a flight instrument used in an aircraft to inform the pilot of the aircraft's heading. It is sometimes referred to by its older names, the directional gyro or DG, and also direction indicator or DI.- Use :The primary means of establishing the heading in most small...
, which are not gyrocompasses and do not position themselves to north via precession, but are periodically aligned manually to magnetic north."

The first, not yet practical, form of gyrocompass was patented in 1885 by Marinus Gerardus van den Bos. Usable gyrocompass was invented in 1906 in Germany by Hermann Anschütz-Kaempfe
Hermann Anschütz-Kaempfe
Hermann Franz Joseph Hubertus Maria Anschütz-Kaempfe was a German scientist and inventor. In his quest to navigate to the North Pole by submarine, he became interested in the concept of the gyrocompass. In 1905 he founded, with Friedrich Treitschke the first firm to manufacture gyroscopic...
, and after successful tests in 1908 became widely used in German Imperial Navy.

In United States, Elmer Ambrose Sperry
Elmer Ambrose Sperry
Elmer Ambrose Sperry was a prolific inventor and entrepreneur, most famous as co-inventor, with Herman Anschütz-Kaempfe of the gyrocompass.Sperry was born at Cincinnatus, New York, United States of America...
produced a workable gyrocompass system (1908: patent #1,242,065), and founded the Sperry Gyroscope Company
Sperry Corporation
Sperry Corporation was a major American equipment and electronics company whose existence spanned more than seven decades of the twentieth century...
. The unit was adopted by the U.S. Navy (1911), and played a major role in World War I. The Navy also began using Sperry's "Metal Mike": the first gyroscope-guided autopilot steering system. In the following decades, these and other Sperry devices were adopted by steamships such as the RMS Queen Mary
RMS Queen Mary
RMS Queen Mary is a retired ocean liner that sailed primarily in the North Atlantic Ocean from 1936 to 1967 for the Cunard Line...
, airplanes, and the warships of World War II. After his death in 1930, the Navy named the USS Sperry after him.
Before the success of gyrocompass, several attempts had been made in Europe to use gyroscope instead. By 1880, William Thomson (lord Kelvin) tried to propose a gyrostat (tope) to the British Navy. In 1889, Arthur Krebs
Arthur Krebs
Arthur Constantin Krebs was a French officer and pioneer in automotive engineering....
adapted an electric motor to the Dumoulin-Froment marine gyroscope, for the French Navy. Giving the Gymnote submarine the ability to keep a straight line under water during several hours, it allowed her to force a naval block in 1890.

A gyrocompass is subject to certain errors. These include steaming error, where rapid changes in course, speed and latitude
Latitude
In geography, the latitude of a location on the Earth is the angular distance of that location south or north of the Equator. The latitude is an angle, and is usually measured in degrees . The equator has a latitude of 0°, the North pole has a latitude of 90° north , and the South pole has a...
cause deviation
Deviation
Deviation may refer to:* Deviation , the difference between the value of an observation and the mean of the population in mathematics and statistics** Standard deviation, which is based on the square of the difference...
before the gyro can adjust itself. On most modern ships the GPS or other navigational aids feed data to the gyrocompass allowing a small computer to apply a correction. Alternatively a design based on an orthogonal triad of fibre optic or ring laser gyroscope
Ring laser gyroscope
A ring laser gyroscope consists of a ring laser having two counter-propagating modes over the same path in order to detect rotation. It operates on the principle of the Sagnac effect which shifts the nulls of the internal standing wave pattern in response to angular rotation...
s will eliminate these errors, as they depend upon no mechanical parts, instead using the principles of optical path difference
Optical path length
In optics, optical path length or optical distance is the product of the geometric length of the path light follows through the system, and the index of refraction of the medium through which it propagates. A difference in optical path length between two paths is often called the optical path...
to determine rate of rotation.