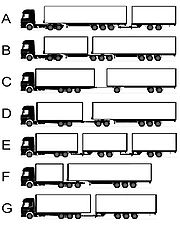 In the simplest terms a B-Train (as related to the road transport
Road transport
Road transport or road transportation is transport on roads of passengers or goods. A hybrid of road transport and ship transport is the historic horse-drawn boat.-History:...
or trucking
Truck driver
A truck driver , is a person who earns a living as the driver of a truck, usually a semi truck, box truck, or dump truck.Truck drivers provide an essential service to...
industry) consists of two trailers
Trailer (vehicle)
A trailer is generally an unpowered vehicle pulled by a powered vehicle. Commonly, the term trailer refers to such vehicles used for transport of goods and materials....
linked together by a fifth wheel, and are up to 26 m (85 ft) long. The fifth wheel coupling
Fifth wheel coupling
The fifth wheel coupling provides the link between a semi-trailer and the towing truck, tractor unit, leading trailer or dolly. Some recreational vehicles use a fifth wheel configuration, requiring the coupling to be installed in the bed of a pickup truck as a towing vehicle...
is located at the rear of the lead, or first trailer and is mounted on a "tail" section commonly located immediately above the lead trailer axles. In North America this area of the lead trailer is often referred to as the "bridge". The twin trailer assembly is hooked up to a tractor unit via the tractor unit's fifth wheel in the customary manner.

The main advantage of the B-Train configuration is its inherent stability when compared to most other twin trailer combinations and it is this feature above all else that has ensured its continued development and global acceptance.

Although known as a B-Train in many countries, this particular twin trailer combination is also known by the term Interlink in Southern Africa and as a B-Double in Australia.

B-Train trailers are used to transport many types of load and examples include tanks for liquid and dry-bulk, flat-beds and curtain-siders for deck-loads, bulkers for aggregates and wood residuals, refrigerated trailers for chilled and frozen goods, vans for dry goods, logging trailers for forestry work and cattle liners for livestock.

The B-Train principle has been exploited to its full potential in Australia where new configurations such as B-Triples, Double-B-Doubles and 2AB Quads are now commonplace.

B-Doubles are known to operate in the following countries or regions. Australia
Australia
Australia , officially the Commonwealth of Australia, is a country in the Southern Hemisphere comprising the mainland of the Australian continent, the island of Tasmania, and numerous smaller islands in the Indian and Pacific Oceans. It is the world's sixth-largest country by total area...
, Brazil
Brazil
Brazil , officially the Federative Republic of Brazil , is the largest country in South America. It is the world's fifth largest country, both by geographical area and by population with over 192 million people...
, Canada
Canada
Canada is a North American country consisting of ten provinces and three territories. Located in the northern part of the continent, it extends from the Atlantic Ocean in the east to the Pacific Ocean in the west, and northward into the Arctic Ocean...
, Finland
Finland
Finland , officially the Republic of Finland, is a Nordic country situated in the Fennoscandian region of Northern Europe. It is bordered by Sweden in the west, Norway in the north and Russia in the east, while Estonia lies to its south across the Gulf of Finland.Around 5.4 million people reside...
, France
France
The French Republic , The French Republic , The French Republic , (commonly known as France , is a unitary semi-presidential republic in Western Europe with several overseas territories and islands located on other continents and in the Indian, Pacific, and Atlantic oceans. Metropolitan France...
, The Netherlands, Indonesia
Indonesia
Indonesia , officially the Republic of Indonesia , is a country in Southeast Asia and Oceania. Indonesia is an archipelago comprising approximately 13,000 islands. It has 33 provinces with over 238 million people, and is the world's fourth most populous country. Indonesia is a republic, with an...
, Mexico
Mexico
The United Mexican States , commonly known as Mexico , is a federal constitutional republic in North America. It is bordered on the north by the United States; on the south and west by the Pacific Ocean; on the southeast by Guatemala, Belize, and the Caribbean Sea; and on the east by the Gulf of...
, New Zealand
New Zealand
New Zealand is an island country in the south-western Pacific Ocean comprising two main landmasses and numerous smaller islands. The country is situated some east of Australia across the Tasman Sea, and roughly south of the Pacific island nations of New Caledonia, Fiji, and Tonga...
, South Africa
South Africa
The Republic of South Africa is a country in southern Africa. Located at the southern tip of Africa, it is divided into nine provinces, with of coastline on the Atlantic and Indian oceans...
, Sweden
Sweden
Sweden , officially the Kingdom of Sweden , is a Nordic country on the Scandinavian Peninsula in Northern Europe. Sweden borders with Norway and Finland and is connected to Denmark by a bridge-tunnel across the Öresund....
, USA, Zimbabwe
Zimbabwe
Zimbabwe is a landlocked country located in the southern part of the African continent, between the Zambezi and Limpopo rivers. It is bordered by South Africa to the south, Botswana to the southwest, Zambia and a tip of Namibia to the northwest and Mozambique to the east. Zimbabwe has three...
. In the United Kingdom
United Kingdom
The United Kingdom of Great Britain and Northern IrelandIn the United Kingdom and Dependencies, other languages have been officially recognised as legitimate autochthonous languages under the European Charter for Regional or Minority Languages...
, Denby Tranpsort is attempting to overturn a ban on most Longer Heavier Vehicle
Longer Heavier Vehicle
Longer Heavier Vehicles , also called super lorries, is a classification of large goods vehicle in the United Kingdom...
s with their Eco-Link
Denby Eco-Link
The Denby Eco-Link, dubbed the super lorry by the mainstream media, is a commercial vehicle designed and built by Denby Transport of the United Kingdom. The Eco-Link is a 60 tonne fully laden, 25.25m long, 8 axle B-Train type of semi-trailer truck, in which a tractor unit pulls two semi-trailers,...
actively steered B-Double.