While from a geometrical point of view the different methods to describe orientations are defined using only some reference frames, in engineering applications it is important also to describe how these frames are attached to the lab and the body in motion.

Due to the special importance of international conventions in air vehicles, several organizations have published standards to be followed. For example, German DIN has published the DIN
Deutsches Institut für Normung
is the German national organization for standardization and is that country's ISO member body. DIN is a Registered German Association headquartered in Berlin...
9300 norm for aircraft (adopted by ISO as ISO 1151–2:1985). 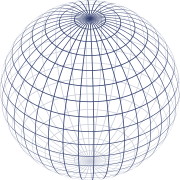 Basically, as lab frame or reference frame, there are two kinds of conventions for the frames (sometimes named LVLH, local vertical, local horizontal):

These frames are location dependent. For movements around the globe, like air or sea navigation, the frames are defined as tangent to the lines of coordinates.

To establish a standard convention to describe attitudes, it is required to establish at least the axes of the reference system and the axes of the rigid body or vehicle. When an ambiguous notation system is used (such as Euler angles) also the used convention should be stated. Nevertheless most used notations (matrices and quaternions) are unambiguous.
Tait–Bryan angles are often used to describe a vehicle's attitude with respect to a chosen reference frame, though any other notation can be used. The positive x-axis in vehicles points always in the direction of movement. For positive y- and z-axis, we have to face two different conventions:

Specially for aircraft, these frames do not need to agree with the earth-bound frames in the up-down line. It must be agreed what ENU and NED mean in this context.

As well as aircraft, the same terminology is used for the motion of ships and boats
Ship motions
Ship motions are defined by the six degrees of freedom that a ship, boat or any other craft can experience.- Translation :HeaveSwaySurge-Vertical axis:Vertical axis, or yaw axis — an axis drawn from top to bottom, and perpendicular to the other two axes...
. It is interesting to note that some words commonly used were introduced in maritime navigation. For example, the yaw angle or heading, has a nautical
Navigation
Navigation is the process of monitoring and controlling the movement of a craft or vehicle from one place to another. It is also the term of art used for the specialized knowledge used by navigators to perform navigation tasks...
origin, with the meaning of "bending out of the course". Etymologically, it is related with the verb 'to go'. It is related to the concept of bearing
Bearing (navigation)
In marine navigation, a bearing is the direction one object is from another object, usually, the direction of an object from one's own vessel. In aircraft navigation, a bearing is the actual compass direction of the forward course of the aircraft...
. It is typically assigned the shorthand notation

Coordinates to describe an aircraft attitude (Heading, Elevation and Bank) are normally given relative to a reference control frame located in a control tower, and therefore ENU, relative to the position of the control tower on the earth surface.

Coordinates to describe observations made from an aircraft are normally given relative to its intrinsic axes, but normally using as positive the coordinate pointing downwards, where the interesting points are located. Therefore they are normally NED.


Conventions for space ships as aircraft

If the goal is to keep the shuttle during its orbits in a constant attitude with respect to the sky, e.g. in order to perform certain astronomical observations, the preferred reference is the inertial frame, and the RPY angle vector (0|0|0) describes an attitude then, where the shuttle's wings are kept permanently parallel to the earth's equator, its nose points permanently to the vernal equinox, and its belly towards the Northern polar star (see picture). (Note that rockets and missiles more commonly follow the conventions for aircraft where the RPY angle vector (0|0|0) points north, rather than toward the vernal equinox).

On the other hand, if it's the goal to keep the shuttle during its orbits in an constant attitude with respect to the surface of the earth, the preferred reference will be the local frame, with the RPY angle vector (0|0|0) describing an attitude, where the shuttle's wings are parallel to the earth's surface, its nose points to its heading, and its belly down towards the centre of the earth (see picture).

An important case in which this does not apply are aircraft. Aircraft observations are performed downwards and therefore normally NED axes convention applies. Nevertheless, when attitudes respect ground stations are given, a relationship between the local earth-bound frame and the onboard ENU frame is used.