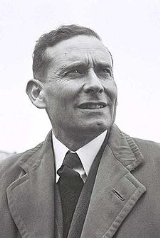 Encyclopedia
Avraham Biran is a kingdom on the East Bank of the River Jordan. The country borders Saudi Arabia to the east and south-east, Iraq to the north-east, Syria to the north and the West Bank and Israel to the west, sharing...
and Ras El Haruba outside Jerusalem. At the request of Yitzhak Ben-Zvi
Yitzhak Ben-Zvi
Yitzhak Ben-Zvi was a historian, Labor Zionist leader, the second and longest-serving President of Israel.-Biography:...
, the head of the Jewish National Council (and later the President of Israel), Biran wrote a response to an anti-Zionist tract authored by Dr. Tawfik Canaan. In 1961, Biran was appointed head of the Department of Antiquities and Museums under the Ministry of Education and Culture, a post he held until 1974. He initiated the publication of the journal "Archaeology News" in Hebrew and English. After Israel's capture of the West Bank
West Bank
The West Bank ) of the Jordan River is the landlocked geographical eastern part of the Palestinian territories located in Western Asia. To the west, north, and south, the West Bank shares borders with the state of Israel. To the east, across the Jordan River, lies the Hashemite Kingdom of Jordan...
in 1967, Biran initiated archaeological surveys in Judea
Judea
Judea or Judæa was the name of the mountainous southern part of the historic Land of Israel from the 8th century BCE to the 2nd century CE, when Roman Judea was renamed Syria Palaestina following the Jewish Bar Kokhba revolt.-Etymology:The...
and Samaria
Samaria
Samaria, or the Shomron is a term used for a mountainous region roughly corresponding to the northern part of the West Bank.- Etymology :...
. He also served as the Israeli representative at the Hague Convention
Hague Convention
The Hague Convention may refer to:* Hague Conventions , among the first formal statements of the laws of war and war crimes in international law...
. At UNESCO
UNESCO
The United Nations Educational, Scientific and Cultural Organization is a specialized agency of the United Nations...
seminars he encouraged the commencement of archaeological digs at the Western Wall
Western Wall
The Western Wall, Wailing Wall or Kotel is located in the Old City of Jerusalem at the foot of the western side of the Temple Mount...
and in the Jewish quarter of Jerusalem. He was instrumental in the founding of the Israel Museum
Israel Museum
The Israel Museum, Jerusalem was founded in 1965 as Israel's national museum. It is situated on a hill in the Givat Ram neighborhood of Jerusalem, near the Bible Lands Museum, the Knesset, the Israeli Supreme Court, and the Hebrew University of Jerusalem....
in Jerusalem and he was active in the refurbishment of the Rockefeller Museum
Rockefeller Museum
The Rockefeller Museum, formerly the Palestine Archaeological Museum, is an archaeological museum located in East Jerusalem that houses a large collection of artifacts unearthed in the excavations conducted in Ottoman Palestine beginning in the late 19th century.The museum is under the management...
and the Shrine of the Book
Shrine of the Book
The Shrine of the Book , a wing of the Israel Museum near Givat Ram in Jerusalem, houses the Dead Sea Scrolls—discovered 1947–56 in 11 caves in and around the Wadi Qumran...
that contains the Qumran
Qumran
Qumran is an archaeological site in the West Bank. It is located on a dry plateau about a mile inland from the northwestern shore of the Dead Sea, near the Israeli settlement and kibbutz of Kalia...
scrolls.

From 1974 Biran headed the Nelson Glueck School of Biblical Archaeology at Hebrew Union College
Hebrew Union College
The Hebrew Union College-Jewish Institute of Religion is the oldest extant Jewish seminary in the Americas and the main seminary for training rabbis, cantors, educators and communal workers in Reform Judaism.HUC-JIR has campuses in Cincinnati, New York, Los Angeles and Jerusalem.The Jerusalem...
in Jerusalem . In 1977 he organized an international conference on the subject of Temples and High Places in Biblical Times, publishing the results of the conference in a book with the same name in 1981. He served as a member of the organizing committee of the International Conference of Biblical Archaeology in 1984 and 1990.

In 1966, Biran began the project with which he has been most famously identified: the excavations at Tel Dan in northern Israel
Israel
The State of Israel is a parliamentary republic located in the Middle East, along the eastern shore of the Mediterranean Sea...
, where he dug for more than 30 years. The 5,000-year-old "Tel" is a mound formed by layer-upon-layer of remnants from civilizations that once occupied the site. In the Tel, Biran discovered the largest religious site ever found that dates from the Israelite period. The excavations revealed fragments from the period when the Cannanite
Canaan
Canaan is a historical region roughly corresponding to modern-day Israel, Palestine, Lebanon, and the western parts of Jordan...
settlement of Laish was re-settled by the Israelite tribe of Dan, although this point is based on the Bible and no evidence has proven this. Dating from the earlier period of the patriarchs, Biran excavated an arched gate, as well as a tremendous dirt wall that surrounded the city. Biran also found artifacts from the period of the Jewish monarchy – the city's defenses, walls and gates as well as the High Places of the Gate mentioned in the Bible. Biran's most important discovery at the Tel was an inscription on a slab of basalt, known as the Tel Dan Stele
Tel Dan Stele
The Tel Dan Stele is a stele discovered in 1993/94 during excavations at Tel Dan in northern Israel. Its author was a king of Damascus, Hazael or one of his sons, and it contains an Aramaic inscription commemorating victories over local ancient peoples including "Israel" and the "House of...
, that consists of 13 lines in ancient Canaanite script that mention The House of David. Regarding the significance of this inscription Hebrew University archaeologist Professor Amnon Ben-Tor said:


In this inscription, which dates to around 800 BCE, Biran believe that a king from the House of David is mentioned as being struck down in the battle with the Arameans. This is the only extra-Biblical source ever found to date that mentions the existence of the Davidic dynasty
Davidic line
The Davidic line refers to the tracing of lineage to the King David referred to in the Hebrew Bible, as well as the New Testament...
and it indeed is an extra-Biblical source that confirms the existence of David as a real historical figure. During the last few years a number of English and Scandinavian researchers have published works suggesting that the kingdoms (and figures) of David
David
David was the second king of the united Kingdom of Israel according to the Hebrew Bible and, according to the Gospels of Matthew and Luke, an ancestor of Jesus Christ through both Saint Joseph and Mary...
and Solomon
Solomon
Solomon , according to the Book of Kings and the Book of Chronicles, a King of Israel and according to the Talmud one of the 48 prophets, is identified as the son of David, also called Jedidiah in 2 Samuel 12:25, and is described as the third king of the United Monarchy, and the final king before...
are literary inventions rather than historical facts..


With regards to the Biblical texts, the Tel Dan Inscription demonstrates that there are definite historical kernels in the Bible that cannot readily be dismissed ... The Tel Dan inscription has brought us a definite step closer to finding a historical David.

In 1937, Biran took an extended break from academia and archeology, taking up an appointment as District Officer for the Afula
Afula
Afula is a city in the North District of Israel, often known as the "Capital of the Valley", referring to the Jezreel Valley. The city had a population of 40,500 at the end of 2009.-History:...
district and the Jezreel Valley
Jezreel Valley
-Etymology:The Jezreel Valley takes its name from the ancient city of Jezreel which was located on a low hill overlooking the southern edge of the valley, though some scholars think that the name of the city originates from the name of the clan which founded it, and whose existence is mentioned in...
settlements. Referring to this sudden career change Biran wrote:


In 1937, in response to the events (of the time) the Jewish settlers demanded that the British Mandate authorities appoint Jewish district officers to deal with their settlements so that they would not have to enter heavily populated Arab cities (to deal with bureaucratic affairs). The Jewish Agency offered me the position. I responded in surprise: what does an archaeologist have to do with Mandatory affairs?. To which they responded: But his this the (Jezreel) Valley! so I could not refuse.

In 1938, Biran began an archaeological survey in the Beit She'an valley in conjunction with Ruth Berndstadter-Amiran. He was miraculously saved after his jeep tripped a land mine on the way to Kibbutz
Kibbutz
A kibbutz is a collective community in Israel that was traditionally based on agriculture. Today, farming has been partly supplanted by other economic branches, including industrial plants and high-tech enterprises. Kibbutzim began as utopian communities, a combination of socialism and Zionism...
Tirat Zvi
Tirat Zvi
Tirat Zvi is a religious kibbutz in the Beit She'an Valley, ten kilometers south of the city of Beit She'an, Israel, just west of the Jordan River and the Israel-Jordan border. It falls under the jurisdiction of Valley of Springs Regional Council. In 2006, the kibbutz had a population of...
. In 1946, Biran was appointed District Officer for the Jerusalem district; he also served as a member of the city counsel of Jerusalem until the Israel's Declaration of Israel's Independence in 1948. During the waning days of the British Mandate in 1948, Biran packed up Jewish property deeds so the owners could reclaim their lands and houses following the anticipated war. He saw this act as paralleling with the experiences of another Jew who hid property titles in the Judean Hills to protect them from Roman legion
Roman legion
A Roman legion normally indicates the basic ancient Roman army unit recruited specifically from Roman citizens. The organization of legions varied greatly over time but they were typically composed of perhaps 5,000 soldiers, divided into maniples and later into "cohorts"...
naires almost two thousand years ago.

After Israeli independence, Biran was appointed as the assistant to the cabinet secretary, also serving as the assistant military governor of Jerusalem. During this time he changed his name from Bergman to Biran. Until 1955 he served as a member of the committee overseeing the cease-fire agreement with Jordan. In 1955 Biran was appointed counsel-general of Israel in Los Angeles, California
Los Angeles, California
Los Angeles , with a population at the 2010 United States Census of 3,792,621, is the most populous city in California, USA and the second most populous in the United States, after New York City. It has an area of , and is located in Southern California...
.

Biran explained his own view of the importance of archaeology, particularly for Jews in modern day Israel:


Israeli archaeology is important to enable us to understand the nations who lived here from prehistoric times onwards. Since the stories of the Bible are connected to this specific land, every archaeological discovery (in Israel) has significance for understanding the Bible. We wish to identify and recognize the places we heard of growing up studying the Bible in school.

Biran remained unapologetic for Israel's control of the West Bank and Jerusalem. He said:


In times of war, the victor takes over the possession of the vanquished. That's what the Jordanians did in the Old City and in the areas which they held and that is what the Israelites did after 1967.