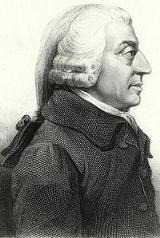 Overview
Adam Smith was a Scottish social philosopher
Ethics
Ethics, also known as moral philosophy, is a branch of philosophy that addresses questions about morality—that is, concepts such as good and evil, right and wrong, virtue and vice, justice and crime, etc.Major branches of ethics include:...
and a pioneer of political economy
Political economy
Political economy originally was the term for studying production, buying, and selling, and their relations with law, custom, and government, as well as with the distribution of national income and wealth, including through the budget process. Political economy originated in moral philosophy...
. One of the key figures of the Scottish Enlightenment
Scottish Enlightenment
The Scottish Enlightenment was the period in 18th century Scotland characterised by an outpouring of intellectual and scientific accomplishments. By 1750, Scots were among the most literate citizens of Europe, with an estimated 75% level of literacy...
, Smith is the author of The Theory of Moral Sentiments
The Theory of Moral Sentiments
The Theory of Moral Sentiments was written by Adam Smith in 1759. It provided the ethical, philosophical, psychological, and methodological underpinnings to Smith's later works, including The Wealth of Nations , A Treatise on Public Opulence , Essays on Philosophical Subjects , and Lectures on...
and An Inquiry into the Nature and Causes of the Wealth of Nations
The Wealth of Nations
An Inquiry into the Nature and Causes of the Wealth of Nations, generally referred to by its shortened title The Wealth of Nations, is the magnum opus of the Scottish economist and moral philosopher Adam Smith...
. The latter, usually abbreviated as The Wealth of Nations, is considered his magnum opus
Magnum opus
Magnum opus , from the Latin meaning "great work", refers to the largest, and perhaps the best, greatest, most popular, or most renowned achievement of a writer, artist, or composer.-Related terms:Sometimes the term magnum opus is used to refer to simply "a great work" rather than "the...
and the first modern work of economics
Economics
Economics is the social science that analyzes the production, distribution, and consumption of goods and services. The term economics comes from the Ancient Greek from + , hence "rules of the house"...
. It earned him an enormous reputation and would become one of the most influential works on economics ever published. Smith is widely cited as the father of modern economics and capitalism
Capitalism
Capitalism is an economic system that became dominant in the Western world following the demise of feudalism. There is no consensus on the precise definition nor on how the term should be used as a historical category...
.

What did he study

What were the only 2 things he thoughtthe government should be involved in?
More

What were his religious views?

What sort of person was he?

China is a much richer country than any part of Europe.

The retinue of a grandee in China or Indostan [sic] accordingly is, by all accounts, much more numerous and splendid than that of the richest subjects in Europe… in manufacturing art and industry, China and Indostan, though inferior, seem not to be much inferior to any part of Europe. The money price of the greater part of manufactures, therefore, will naturally be much lower in those great empires than it is any-where in Europe.