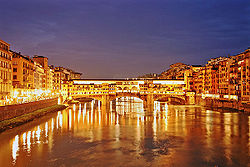 The Arno is a river
River
A river is a natural watercourse, usually freshwater, flowing towards an ocean, a lake, a sea, or another river. In a few cases, a river simply flows into the ground or dries up completely before reaching another body of water. Small rivers may also be called by several other names, including...
in the Tuscany
Tuscany
Tuscany is a region in Italy. It has an area of about 23,000 square kilometres and a population of about 3.75 million inhabitants. The regional capital is Florence ....
region of Italy
Italy
Italy , officially the Italian Republic languages]] under the European Charter for Regional or Minority Languages. In each of these, Italy's official name is as follows:;;;;;;;;), is a unitary parliamentary republic in South-Central Europe. To the north it borders France, Switzerland, Austria and...
. It is the most important river of central Italy
Central Italy
Central Italy is one of the five official statistical regions of Italy used by the National Institute of Statistics , a first level NUTS region and a European Parliament constituency...
after the Tiber
Tiber
The Tiber is the third-longest river in Italy, rising in the Apennine Mountains in Emilia-Romagna and flowing through Umbria and Lazio to the Tyrrhenian Sea. It drains a basin estimated at...
.

The river originates on Mount Falterona in the Casentino
Casentino
The Casentino is the valley in which the first tract of the river Arno flows to Subbiano, Italy.It is one of the four valleys in which the Province of Arezzo is divided. Mount Falterona, from which the Arno starts, represents the northern boundary between the Casentino and Romagna...
area of the Apennines
Apennine mountains
The Apennines or Apennine Mountains or Greek oros but just as often used alone as a noun. The ancient Greeks and Romans typically but not always used "mountain" in the singular to mean one or a range; thus, "the Apennine mountain" refers to the entire chain and is translated "the Apennine...
, and initially takes a southward curve. The river turns to the west near Arezzo
Arezzo
Arezzo is a city and comune in Central Italy, capital of the province of the same name, located in Tuscany. Arezzo is about 80 km southeast of Florence, at an elevation of 296 m above sea level. In 2011 the population was about 100,000....
passing through Florence
Florence
Florence is the capital city of the Italian region of Tuscany and of the province of Florence. It is the most populous city in Tuscany, with approximately 370,000 inhabitants, expanding to over 1.5 million in the metropolitan area....
, Empoli
Empoli
Empoli is a town and comune in Tuscany, Italy, about 20 km southwest of Florence, to the south of the Arno in a plain formed by the latter river. The plain has been usable for agriculture since Roman times. The commune's territory becomes a hilly one as it departs from the river...
and Pisa
Pisa
Pisa is a city in Tuscany, Central Italy, on the right bank of the mouth of the River Arno on the Tyrrhenian Sea. It is the capital city of the Province of Pisa...
, flowing into the Tyrrhenian Sea
Tyrrhenian Sea
The Tyrrhenian Sea is part of the Mediterranean Sea off the western coast of Italy.-Geography:The sea is bounded by Corsica and Sardinia , Tuscany, Lazio, Campania, Basilicata and Calabria and Sicily ....
at Marina di Pisa
Marina di pisa
Marina di Pisa is a seaside resort of Tuscany, in central Italy.It is a frazione of the provincial capital of Pisa, which lies about 10 km to the east.-Geography:...
.

With a length of 241 kilometres (149.8 mi), it is the largest river in the region. It has many tributaries: Sieve (60 kilometres (37.3 mi)), Bisenzio (49 kilometres (30.4 mi)), Ombrone
Ombrone
The Ombrone is a 160 km long river in Tuscany, central Italy.The Ombrone's source is located near Castelnuovo Berardenga, on the south-eastern side of the Monti del Chianti...
, Era, Elsa, Pesa and Pescia. The drainage basin amounts to more than 8200 sqkm and drains the waters of the following sub-basins:


It crosses Florence, where it passes below the Ponte Vecchio
Ponte Vecchio
The Ponte Vecchio is a Medieval stone closed-spandrel segmental arch bridge over the Arno River, in Florence, Italy, noted for still having shops built along it, as was once common. Butchers initially occupied the shops; the present tenants are jewellers, art dealers and souvenir sellers...
and the Santa Trìnita bridge
Ponte Santa Trinita
The Ponte Santa Trìnita is a Renaissance bridge in Florence, Italy, spanning the Arno. The Ponte Santa Trìnita is the oldest elliptic arch bridge in the world, the three flattened ellipses giving the structure its celebrated elegant appearance...
(built by Bartolomeo Ammanati
Bartolomeo Ammanati
Bartolomeo Ammannati was an Italian architect and sculptor, born at Settignano, near Florence. He studied under Baccio Bandinelli and Jacopo Sansovino and closely imitated the style of Michelangelo.He was more distinguished in architecture than in sculpture...
, but inspired by Michelangelo
Michelangelo
Michelangelo di Lodovico Buonarroti Simoni , commonly known as Michelangelo, was an Italian Renaissance painter, sculptor, architect, poet, and engineer who exerted an unparalleled influence on the development of Western art...
). The river flood
Flood
A flood is an overflow of an expanse of water that submerges land. The EU Floods directive defines a flood as a temporary covering by water of land not normally covered by water...
ed this city regularly in historical times, the last occasion being the famous flood of 1966, with 4,500 m³/s after rainfall of 437.2 millimetres (17.2 in) in Badia Agnano and 190 millimetres (7.5 in) in Florence, in only 24 hours.

The flow rate of the Arno is irregular. It is sometimes described as having a torrent-like behaviour, because it can easily go from almost dry to near-flood in a few days. At the point where the Arno leaves the Apennines, flow measurements can vary between 0.56 m³/s and 3,540 m³/s. New dam
Dam
A dam is a barrier that impounds water or underground streams. Dams generally serve the primary purpose of retaining water, while other structures such as floodgates or levees are used to manage or prevent water flow into specific land regions. Hydropower and pumped-storage hydroelectricity are...
s built upstream of Florence have greatly alleviated the problem in recent years.

A flood on November 4, 1966 collapsed the embankment in Florence, killing at least 40 people and damaging or destroying millions of works of art and rare books. New conservation techniques were inspired by the disaster, but even 40 years later hundreds of works still await restoration.