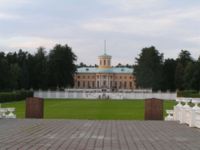 Arkhangelskoye is a historical estate located around 20 kilometers to the west from Moscow
Moscow
Moscow is the capital, the most populous city, and the most populous federal subject of Russia. The city is a major political, economic, cultural, scientific, religious, financial, educational, and transportation centre of Russia and the continent...
. In 1703–1810 Arkhangelskoye belonged to Galitzine
Galitzine
For Orthodox clergyman and theologian, see Alexander Golitzin.The Galitzines are one of the largest and noblest princely houses of Russia. Since the extinction of the Korecki family in the 17th century, the Golitsyns have claimed dynastic seniority in the House of Gediminas...
, and from 1810–1917, to the Yusupov family
Yusupov family
The Yusupovs are a Russian noble family descended from the Khans of the 10th century who, in the 18th and 19th centuries, were renowned for their immense wealth, philanthropy and art collections...
. In 1917 the Yusupovs' property was nationalized by the Bolsheviks. Nowadays Arkhangelskoye is a state museum.

The estate is built in a classicizing
Classicism
Classicism, in the arts, refers generally to a high regard for classical antiquity, as setting standards for taste which the classicists seek to emulate. The art of classicism typically seeks to be formal and restrained: of the Discobolus Sir Kenneth Clark observed, "if we object to his restraint...
style, with the prominent palace facing the Moscow river and a regular terraced park decorated with many antique statues. Other structures of note inclide a small palace named the Caprice, monuments to Catherine II of Russia
Catherine II of Russia
Catherine II, also known as Catherine the Great , Empress of Russia, was born in Stettin, Pomerania, Prussia on as Sophie Friederike Auguste von Anhalt-Zerbst-Dornburg...
and Alexander Pushkin, and an 18th century the theater designed by famous Italian theater set designer Pietro Gonzaga
Pietro Gonzaga
Pietro di Gottardo Gonzaga was an Italian theatre set designer who worked in Italy and, since 1792, in the Russian Empire....
(1751-1831). Arkhangelskoye's oldest building is the church of Archangel Michael (1646). Among the other buildings are Saint Gates (1825–26), the uncompleted building known as 'Colonnade' (1909–1916), which was intended to be a Mausoleum for the elder son of the last Princess Yussupova and serves today as an exhibition hall and two extensions of the sanatorium built in the 1930s.

The estate is famous with its exquisite collection of fine art including paintings, sculptures, furnitures, ceramics and interior.

In 1996 the Ministry of Culture acquired the estate, but did not find itself in a position to maintain it. For this reason, the site was listed in the 1996 World Monuments Watch by the World Monuments Fund
World Monuments Fund
World Monuments Fund is a private, international, non-profit organization dedicated to the preservation of historic architecture and cultural heritage sites around the world through fieldwork, advocacy, grantmaking, education, and training....
. According to the organization, exterior columns and plaster
Plaster
Plaster is a building material used for coating walls and ceilings. Plaster starts as a dry powder similar to mortar or cement and like those materials it is mixed with water to form a paste which liberates heat and then hardens. Unlike mortar and cement, plaster remains quite soft after setting,...
were damaged, and the theater's roof and main staircase were unsound. When the site was listed again on the 2002 World Monuments Watch, Moscow officials had drafted a thorough conservation plan, which included work on the exterior of the building and the surrounding gardens. Help for interior conservation came from American Express
American Express
American Express Company or AmEx, is an American multinational financial services corporation headquartered in Three World Financial Center, Manhattan, New York City, New York, United States. Founded in 1850, it is one of the 30 components of the Dow Jones Industrial Average. The company is best...
through the World Monuments Fund. During this project, paintings by Hubert Robert
Hubert Robert
Hubert Robert , French artist, was born in Paris.His father, Nicolas Robert, was in the service of François-Joseph de Choiseul, marquis de Stainville a leading diplomat from Lorraine...
were conserved and other repairs took place. Nowadays Arkhangelskoye is a popular tourist attraction, and is often visited by Muscovites on short trips. Important cultural events take place at the estate, such as music festivals. As of December 2006, large restoration works are nearly to be finished at the palace.