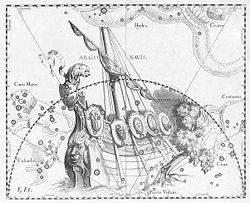 Argo Navis was a large constellation
Constellation
In modern astronomy, a constellation is an internationally defined area of the celestial sphere. These areas are grouped around asterisms, patterns formed by prominent stars within apparent proximity to one another on Earth's night sky....
in the southern sky that has since been divided into three constellations. It represented the Argo
Argo
In Greek mythology, the Argo was the ship on which Jason and the Argonauts sailed from Iolcos to retrieve the Golden Fleece. It was named after its builder, Argus.-Legend:...
, the ship used by Jason
Jason
Jason was a late ancient Greek mythological hero from the late 10th Century BC, famous as the leader of the Argonauts and their quest for the Golden Fleece. He was the son of Aeson, the rightful king of Iolcus...
and the Argonauts
Argonauts
The Argonauts ) were a band of heroes in Greek mythology who, in the years before the Trojan War, accompanied Jason to Colchis in his quest to find the Golden Fleece. Their name comes from their ship, the Argo, which was named after its builder, Argus. "Argonauts", therefore, literally means...
in Greek mythology
Greek mythology
Greek mythology is the body of myths and legends belonging to the ancient Greeks, concerning their gods and heroes, the nature of the world, and the origins and significance of their own cult and ritual practices. They were a part of religion in ancient Greece...
. The abbreviation was "Arg" and the genitive was "Argus Navis".

Argo Navis is the only one of the 48 constellations listed by the 2nd century astronomer Ptolemy
Ptolemy
Claudius Ptolemy , was a Roman citizen of Egypt who wrote in Greek. He was a mathematician, astronomer, geographer, astrologer, and poet of a single epigram in the Greek Anthology. He lived in Egypt under Roman rule, and is believed to have been born in the town of Ptolemais Hermiou in the...
that is no longer officially recognised as a constellation. It was unwieldy due to its enormous size: were it still considered a single constellation, it would be the largest of all. In 1752, the French astronomer Nicolas Louis de Lacaille
Nicolas Louis de Lacaille
Abbé Nicolas Louis de Lacaille was a French astronomer.He is noted for his catalogue of nearly 10,000 southern stars, including 42 nebulous objects. This catalogue, called Coelum Australe Stelliferum, was published posthumously in 1763. It introduced 14 new constellations which have since become...
subdivided it into Carina
Carina (constellation)
Carina is a constellation in the southern sky. Its name is Latin for the keel of a ship, and it was formerly part of the larger constellation of Argo Navis until that constellation was divided in three.-Stars:...
(the keel
Keel
In boats and ships, keel can refer to either of two parts: a structural element, or a hydrodynamic element. These parts overlap. As the laying down of the keel is the initial step in construction of a ship, in British and American shipbuilding traditions the construction is dated from this event...
, or the hull, of the ship), Puppis
Puppis
Puppis is a constellation in the southern sky. Its name is the Latin word for the poop deck of a ship, and Puppis represents the deck of the ship and its deckhouses...
(the poop deck
Poop deck
In naval architecture, a poop deck is a deck that forms the roof of a cabin built in the rear, or "aft", part of the superstructure of a ship.The name originates from the French word for stern, la poupe, from Latin puppis...
), and Vela
Vela (constellation)
Vela is a constellation in the southern sky. Its name is Latin for the sails of a ship, and it was originally part of a larger constellation, the ship Argo Navis, which was later divided into three parts, the others being Carina and Puppis.-Stars:...
(the sail
Sail
A sail is any type of surface intended to move a vessel, vehicle or rotor by being placed in a wind—in essence a propulsion wing. Sails are used in sailing.-History of sails:...
s). When Argo Navis was split, its Bayer designation
Bayer designation
A Bayer designation is a stellar designation in which a specific star is identified by a Greek letter, followed by the genitive form of its parent constellation's Latin name...
s were also split. Carina has the α, β and ε, Vela has γ and δ, Puppis has ζ, and so on.


The carina star is mentioned (in the Argo Navis constellation) in the book "Childhood's End" by Arthur C. Clarke. Carina is the home to the overlords.
The source of this article is wikipedia, the free encyclopedia.  The text of this article is licensed under the GFDL.