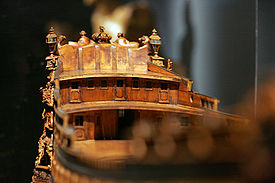 In naval architecture
Naval architecture
Naval architecture is an engineering discipline dealing with the design, construction, maintenance and operation of marine vessels and structures. Naval architecture involves basic and applied research, design, development, design evaluation and calculations during all stages of the life of a...
, a poop deck is a deck
Deck (ship)
A deck is a permanent covering over a compartment or a hull of a ship. On a boat or ship, the primary deck is the horizontal structure which forms the 'roof' for the hull, which both strengthens the hull and serves as the primary working surface...
that forms the roof
Roof
A roof is the covering on the uppermost part of a building. A roof protects the building and its contents from the effects of weather. Structures that require roofs range from a letter box to a cathedral or stadium, dwellings being the most numerous....
of a cabin built in the rear, or "aft
Aft
Aft, in naval terminology, is an adjective or adverb meaning, towards the stern of the ship, when the frame of reference is within the ship. Example: "Able Seaman Smith; lay aft!". Or; "What's happening aft?"...
", part of the superstructure
Superstructure
A superstructure is an upward extension of an existing structure above a baseline. This term is applied to various kinds of physical structures such as buildings, bridges, or ships...
of a ship
Ship
Since the end of the age of sail a ship has been any large buoyant marine vessel. Ships are generally distinguished from boats based on size and cargo or passenger capacity. Ships are used on lakes, seas, and rivers for a variety of activities, such as the transport of people or goods, fishing,...
.

The name originates from the French
French language
French is a Romance language spoken as a first language in France, the Romandy region in Switzerland, Wallonia and Brussels in Belgium, Monaco, the regions of Quebec and Acadia in Canada, and by various communities elsewhere. Second-language speakers of French are distributed throughout many parts...
word for stern
Stern
The stern is the rear or aft-most part of a ship or boat, technically defined as the area built up over the sternpost, extending upwards from the counter rail to the taffrail. The stern lies opposite of the bow, the foremost part of a ship. Originally, the term only referred to the aft port section...
, la poupe, from Latin
Latin
Latin is an Italic language originally spoken in Latium and Ancient Rome. It, along with most European languages, is a descendant of the ancient Proto-Indo-European language. Although it is considered a dead language, a number of scholars and members of the Christian clergy speak it fluently, and...
puppis. Thus the poop deck is technically a stern deck, which in sailing ships was usually elevated as the roof of the stern or "after" cabin, also known as the "poop cabin". In sailing ships, with the helmsman
Helmsman
A helmsman is a person who steers a ship, sailboat, submarine, or other type of maritime vessel. On small vessels, particularly privately-owned noncommercial vessels, the functions of skipper and helmsman may be combined in one person. On larger vessels, there is a separate officer of the watch,...
at the stern, an elevated position was ideal for both navigation
Navigation
Navigation is the process of monitoring and controlling the movement of a craft or vehicle from one place to another. It is also the term of art used for the specialized knowledge used by navigators to perform navigation tasks...
and observation of the crew and sails.

The fantail is an overhang at the extreme rear of the ship, to the rear of the poop deck and closer to level with the main deck. On a stern wheel steamboat
Paddle steamer
A paddle steamer is a steamship or riverboat, powered by a steam engine, using paddle wheels to propel it through the water. In antiquity, Paddle wheelers followed the development of poles, oars and sails, where the first uses were wheelers driven by animals or humans...
, the fantail supports the large paddle wheel and is typically angled upwards so the shaft of the paddle wheel can sit higher than the main deck. On some steamboats, the extreme end of the fantail supports "monkey" rudders that mimic the operation of the main rudders
Rudder
A rudder is a device used to steer a ship, boat, submarine, hovercraft, aircraft or other conveyance that moves through a medium . On an aircraft the rudder is used primarily to counter adverse yaw and p-factor and is not the primary control used to turn the airplane...
in order to provide additional steering control.

On modern, motorized warships, the ship functions which were once carried out on the poop deck have been moved to the bridge, usually located on the superstructure in the center of the ship or the island on the starboard side in the case of aircraft carrier
Aircraft carrier
An aircraft carrier is a warship designed with a primary mission of deploying and recovering aircraft, acting as a seagoing airbase. Aircraft carriers thus allow a naval force to project air power worldwide without having to depend on local bases for staging aircraft operations...
s.
The source of this article is wikipedia, the free encyclopedia.  The text of this article is licensed under the GFDL.