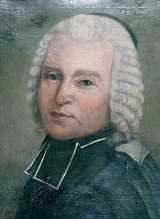 Encyclopedia
Abbé Nicolas Louis de Lacaille (March 15, 1713 – March 21, 1762) was a French
Kingdom of France
The Kingdom of France was one of the most powerful states to exist in Europe during the second millennium.It originated from the Western portion of the Frankish empire, and consolidated significant power and influence over the next thousand years. Louis XIV, also known as the Sun King, developed a...
astronomer
Astronomer
An astronomer is a scientist who studies celestial bodies such as planets, stars and galaxies.Historically, astronomy was more concerned with the classification and description of phenomena in the sky, while astrophysics attempted to explain these phenomena and the differences between them using...
.

He is noted for his catalogue of nearly 10,000 southern star
Star
A star is a massive, luminous sphere of plasma held together by gravity. At the end of its lifetime, a star can also contain a proportion of degenerate matter. The nearest star to Earth is the Sun, which is the source of most of the energy on Earth...
s, including 42 nebulous objects. This catalogue, called Coelum Australe Stelliferum, was published posthumously in 1763. It introduced 14 new constellation
Constellation
In modern astronomy, a constellation is an internationally defined area of the celestial sphere. These areas are grouped around asterisms, patterns formed by prominent stars within apparent proximity to one another on Earth's night sky....
s which have since become standard. He also calculated a table of eclipse
Eclipse
An eclipse is an astronomical event that occurs when an astronomical object is temporarily obscured, either by passing into the shadow of another body or by having another body pass between it and the viewer...
s for 1800 years.

In honor of his contribution to the study of the southern hemisphere sky, a 60-cm telescope at Reunion Island will be named the La Caille Telescope.

Born at Rumigny, Ardennes
Rumigny, Ardennes
Rumigny is a commune in the Ardennes department in the Champagne-Ardenne region in northern France.It lies near Rozoy-en-Thièrache, from Mon Idée on the border with Belgium, at the junction of routes D877 and D977.-Population:...
, he was left destitute by the death of his father, who held a post in the household of the duchess of Vendôme. Therefore, his theological studies at the College de Lisieux in Paris were undertaken at the expense of the duke of Bourbon.

After he had taken deacon
Deacon
Deacon is a ministry in the Christian Church that is generally associated with service of some kind, but which varies among theological and denominational traditions...
's orders, however, he concentrated on science, and, through the patronage of Jacques Cassini
Jacques Cassini
Jacques Cassini was a French astronomer, son of the famous Italian astronomer Giovanni Domenico Cassini.Cassini was born at the Paris Observatory. Admitted at the age of seventeen to membership of the French Academy of Sciences, he was elected in 1696 a fellow of the Royal Society of London, and...
, obtained employment, first in surveying the coast from Nantes
Nantes
Nantes is a city in western France, located on the Loire River, from the Atlantic coast. The city is the 6th largest in France, while its metropolitan area ranks 8th with over 800,000 inhabitants....
to Bayonne
Bayonne
Bayonne is a city and commune in south-western France at the confluence of the Nive and Adour rivers, in the Pyrénées-Atlantiques department, of which it is a sub-prefecture...
, then, in 1739, in remeasuring the French arc of the meridian, for which he is honored with a pyramid at Juvisy-sur-Orge
Juvisy-sur-Orge
Juvisy-sur-Orge is a commune in the Essonne department in Île-de-France in northern France.Inhabitants of Juvisy-sur-Orge are known as Juvisiens.-Geography:Neighboring communes:* Athis-Mons* Draveil* Savigny-sur-Orge* Viry-Châtillon...
. The success of this difficult operation, which occupied two years, and achieved the correction of the anomalous result published by J. Cassini in 1718, was mainly due to Lacaille's industry and skill. He was rewarded by admission to the Academy and the appointment of mathematical professor in Mazarin college
Collège des Quatre-Nations
The Collège des Quatre-Nations , also known as the Collège Mazarin after its founder, was one of the colleges of the historic University of Paris. It was founded through a bequest by the Cardinal Mazarin...
, where he worked in a small observatory fitted for his use.

His desire to observe the southern heavens led him to propose, in 1750, an astronomical expedition to the Cape of Good Hope
Cape of Good Hope
The Cape of Good Hope is a rocky headland on the Atlantic coast of the Cape Peninsula, South Africa.There is a misconception that the Cape of Good Hope is the southern tip of Africa, because it was once believed to be the dividing point between the Atlantic and Indian Oceans. In fact, the...
. This was officially sanctioned by Roland-Michel Barrin de La Galissonière
Roland-Michel Barrin de La Galissonière
Roland-Michel Barrin de La Galissonière, Marquis de La Galissonière, sometimes spelled Galissonnière, was the French governor of New France from 1747 to 1749 and the victor in the Battle of Minorca in 1756.- New France :...
. Among its results were determinations of the lunar and of the solar parallax
Parallax
Parallax is a displacement or difference in the apparent position of an object viewed along two different lines of sight, and is measured by the angle or semi-angle of inclination between those two lines. The term is derived from the Greek παράλλαξις , meaning "alteration"...
(Mars serving as an intermediary), the first measurement of a South African arc of the meridian, and the observation of 10,000 southern stars. On his return to Paris in 1754 Lacaille was distressed to find himself an object of public attention; he withdrew to Mazarin college, where he worked actively for some years, and there died of an attack of gout
Gout
Gout is a medical condition usually characterized by recurrent attacks of acute inflammatory arthritis—a red, tender, hot, swollen joint. The metatarsal-phalangeal joint at the base of the big toe is the most commonly affected . However, it may also present as tophi, kidney stones, or urate...
aggravated by over-work in 1762.

Lalande
Jérôme Lalande
Joseph Jérôme Lefrançois de Lalande was a French astronomer and writer.-Biography:Lalande was born at Bourg-en-Bresse...
said of him that, during a comparatively short life, he had made more observations and calculations than all the astronomers of his time put together. The quality of his work rivalled its quantity, while the disinterestedness and rectitude of his moral character earned him universal respect.

The crater La Caille
La Caille (crater)
La Caille is a lunar crater located in the rugged south-central highlands of the Moon. It is located to the northeast of the crater Purbach. Nearly attached to the southeast rim are the remains of Blanchinus, and the two are separated by a rugged stretch of terrain...
on the Moon
Moon
The Moon is Earth's only known natural satellite,There are a number of near-Earth asteroids including 3753 Cruithne that are co-orbital with Earth: their orbits bring them close to Earth for periods of time but then alter in the long term . These are quasi-satellites and not true moons. For more...
is named after him. Asteroid
Asteroid
Asteroids are a class of small Solar System bodies in orbit around the Sun. They have also been called planetoids, especially the larger ones...
9135 Lacaille
9135 Lacaille
9135 Lacaille is a main-belt asteroid discovered on October 17, 1960 by Cornelis Johannes van Houten, Ingrid van Houten-Groeneveld and Tom Gehrels at Palomar Observatory.- External links :*...
(AKA 7609 P-L and 1994 EK6), discovered on 17 October 1960 by Cornelis Johannes van Houten
Cornelis Johannes van Houten
Cornelis Johannes van Houten was a Dutch astronomer, sometimes referred to as Kees van Houten.Born in The Hague, he spent his entire career at Leiden University except for a brief period as research assistant at Yerkes Observatory...
, Ingrid van Houten-Groeneveld
Ingrid van Houten-Groeneveld
Ingrid van Houten-Groeneveld is a Dutch astronomer.In a jointly-credited trio with Tom Gehrels and her husband Cornelis Johannes van Houten, she was an extremely prolific discoverer of many thousands of asteroids...
and Tom Gehrels
Tom Gehrels
Tom Gehrels , was an American astronomer, Professor Planetary Sciences, and Astronomer at the University of Arizona, Tucson....
at Palomar Observatory
Palomar Observatory
Palomar Observatory is a privately owned observatory located in San Diego County, California, southeast of Pasadena's Mount Wilson Observatory, in the Palomar Mountain Range. At approximately elevation, it is owned and operated by the California Institute of Technology...
, was also named after him.


Measuring the southern arc of meridian

At the Cape
Cape of Good Hope
The Cape of Good Hope is a rocky headland on the Atlantic coast of the Cape Peninsula, South Africa.There is a misconception that the Cape of Good Hope is the southern tip of Africa, because it was once believed to be the dividing point between the Atlantic and Indian Oceans. In fact, the...
, Abbé de Lacaille wanted to test Newton's theory of gravitation and verify the shape of the earth in the southern hemisphere. He set out a baseline north of Darling
Darling, Western Cape
Darling is a small town in a farming area on the west coast region of the Western Cape, about 75 km from Cape Town.By the beginning of the 18th century about 29 farmers lived in an area called Groenkloof and on one of these farms, Langfontein, Darling was founded in 1853...
. Using triangulation he then measured a 137 km arc of meridian between Cape Town
Cape Town
Cape Town is the second-most populous city in South Africa, and the provincial capital and primate city of the Western Cape. As the seat of the National Parliament, it is also the legislative capital of the country. It forms part of the City of Cape Town metropolitan municipality...
and Aurora. The results suggested the earth was egg-shaped rather than oval.
In 1838, Thomas Maclear
Thomas Maclear
Sir Thomas Maclear was an Irish-born South African astronomer who became Her Majesty's astronomer at the Cape of Good Hope....
who was Astronomer Royal at the Cape, repeated the measurements. He found that de Lacaille had failed to take into account the gravitational attraction of the nearby mountains.