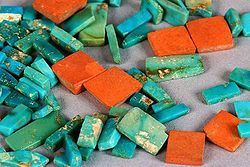 An argillite is a fine-grained sedimentary rock
Sedimentary rock
Sedimentary rock are types of rock that are formed by the deposition of material at the Earth's surface and within bodies of water. Sedimentation is the collective name for processes that cause mineral and/or organic particles to settle and accumulate or minerals to precipitate from a solution....
composed predominantly of indurated clay
Clay
Clay is a general term including many combinations of one or more clay minerals with traces of metal oxides and organic matter. Geologic clay deposits are mostly composed of phyllosilicate minerals containing variable amounts of water trapped in the mineral structure.- Formation :Clay minerals...
particles. Argillaceous rocks are basically lithified muds and oozes. They contain variable amounts of silt
Silt
Silt is granular material of a size somewhere between sand and clay whose mineral origin is quartz and feldspar. Silt may occur as a soil or as suspended sediment in a surface water body...
-sized particles. The argillites grade into shale
Shale
Shale is a fine-grained, clastic sedimentary rock composed of mud that is a mix of flakes of clay minerals and tiny fragments of other minerals, especially quartz and calcite. The ratio of clay to other minerals is variable. Shale is characterized by breaks along thin laminae or parallel layering...
when the fissile
Fissility (geology)
Fissility refers to the property of rocks to split along planes of weakness into thin sheets. This is commonly observed in shales, which are sedimentary rocks, and in slates and phyllites, which are foliated metamorphic rocks. The fissility in these rocks is caused by the preferred alignment of...
layering typical of shale is developed. Another name for poorly lithified argillites is mudstone
Mudstone
Mudstone is a fine grained sedimentary rock whose original constituents were clays or muds. Grain size is up to 0.0625 mm with individual grains too small to be distinguished without a microscope. With increased pressure over time the platey clay minerals may become aligned, with the...
. These rocks, although variable in composition, are typically high in aluminium
Aluminium
Aluminium or aluminum is a silvery white member of the boron group of chemical elements. It has the symbol Al, and its atomic number is 13. It is not soluble in water under normal circumstances....
and silica with variable alkali
Alkali
In chemistry, an alkali is a basic, ionic salt of an alkali metal or alkaline earth metal element. Some authors also define an alkali as a base that dissolves in water. A solution of a soluble base has a pH greater than 7. The adjective alkaline is commonly used in English as a synonym for base,...
and alkaline earth cations. The term pelitic or pelite
Pelite
Pelite is old and currently not widely used field terminology for a clayey fine-grained clastic sediment or sedimentary rock, i.e. mud or mudstone. It is equivalent to the Latin-derived term lutite. More commonly, metamorphic geologists currently use pelite for a metamorphosed fine-grained...
is often applied to these sediment
Sediment
Sediment is naturally occurring material that is broken down by processes of weathering and erosion, and is subsequently transported by the action of fluids such as wind, water, or ice, and/or by the force of gravity acting on the particle itself....
s and rocks. Metamorphism
Metamorphism
Metamorphism is the solid-state recrystallization of pre-existing rocks due to changes in physical and chemical conditions, primarily heat, pressure, and the introduction of chemically active fluids. Mineralogical, chemical and crystallographic changes can occur during this process...
of argillites produces slate
Slate
Slate is a fine-grained, foliated, homogeneous metamorphic rock derived from an original shale-type sedimentary rock composed of clay or volcanic ash through low-grade regional metamorphism. The result is a foliated rock in which the foliation may not correspond to the original sedimentary layering...
, phyllite
Phyllite
Phyllite is a type of foliated metamorphic rock primarily composed of quartz, sericite mica, and chlorite; the rock represents a gradation in the degree of metamorphism between slate and mica schist. Minute crystals of graphite, sericite, or chlorite impart a silky, sometimes golden sheen to the...
, and pelitic schist
Schist
The schists constitute a group of medium-grade metamorphic rocks, chiefly notable for the preponderance of lamellar minerals such as micas, chlorite, talc, hornblende, graphite, and others. Quartz often occurs in drawn-out grains to such an extent that a particular form called quartz schist is...
.

The Belt Supergroup
Belt Supergroup
The Belt Supergroup, is an assemblage of Mesoproterozoic sedimentary rocks which outcrop chiefly in western Montana, but also exposed in Idaho, Washington, Wyoming, and British Columbia. It is most famous as the formation that makes up Glacier National Park in northwest Montana...
of rocks is composed mainly of argillite, as well as other metamorphosed or semi-metamorphosed mudstones. This supergroup is mainly exposed in Western Montana
Montana
Montana is a state in the Western United States. The western third of Montana contains numerous mountain ranges. Smaller, "island ranges" are found in the central third of the state, for a total of 77 named ranges of the Rocky Mountains. This geographical fact is reflected in the state's name,...
, including the Bitterroot Valley
Bitterroot Valley
The Bitterroot Valley is located in southwestern Montana in the northwestern United States. It extends over 100 miles from remote Horse Creek Pass north to a point near the city of Missoula...
and Bitterroot Mountains
Bitterroot Mountains
The Northern and Central Bitterroot Range, collectively the Bitterroot Mountains, is the largest portion of the Bitterroot Range, part of the Rocky Mountains, located in the panhandle of Idaho and westernmost Montana in the Western United States...
, Missoula area, Flathead Lake
Flathead Lake
Flathead Lake is the largest natural freshwater lake in the western part of the contiguous United States. With a surface area of between and , it is slightly larger than Lake Tahoe. The lake is a remnant of the ancient inland sea, Lake Missoula of the era of the last interglacial. Flathead Lake...
, and Glacier National Park
Glacier National Park
Glacier National Park may refer to:*Glacier National Park in British Columbia, Canada*Glacier National Park in Montana, USA-See also:*Glacier Bay National Park, in Alaska, USA*Los Glaciares National Park, in Argentina...
, and is also exposed in parts of Northern Idaho
Idaho
Idaho is a state in the Rocky Mountain area of the United States. The state's largest city and capital is Boise. Residents are called "Idahoans". Idaho was admitted to the Union on July 3, 1890, as the 43rd state....
, and British Columbia
British Columbia
British Columbia is the westernmost of Canada's provinces and is known for its natural beauty, as reflected in its Latin motto, Splendor sine occasu . Its name was chosen by Queen Victoria in 1858...
. Belt Supergroup rocks are also thought to be present in what is now Korea
Korea
Korea ) is an East Asian geographic region that is currently divided into two separate sovereign states — North Korea and South Korea. Located on the Korean Peninsula, Korea is bordered by the People's Republic of China to the northwest, Russia to the northeast, and is separated from Japan to the...
, Manchuria
Manchuria
Manchuria is a historical name given to a large geographic region in northeast Asia. Depending on the definition of its extent, Manchuria usually falls entirely within the People's Republic of China, or is sometimes divided between China and Russia. The region is commonly referred to as Northeast...
, and Eastern Siberia
Siberia
Siberia is an extensive region constituting almost all of Northern Asia. Comprising the central and eastern portion of the Russian Federation, it was part of the Soviet Union from its beginning, as its predecessor states, the Tsardom of Russia and the Russian Empire, conquered it during the 16th...
as well as possibly Australia
Australia
Australia , officially the Commonwealth of Australia, is a country in the Southern Hemisphere comprising the mainland of the Australian continent, the island of Tasmania, and numerous smaller islands in the Indian and Pacific Oceans. It is the world's sixth-largest country by total area...
. Glacier National Park in northwestern Montana and Wolf Creek Canyon along the US Interstate 15 in west-central Montana are well-known for their exposed deep purple, wine red, red, blue, turquoise, and green argillites.