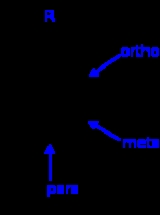 Encyclopedia
Arene substitution patterns are part of organic chemistry
Organic chemistry
Organic chemistry is a subdiscipline within chemistry involving the scientific study of the structure, properties, composition, reactions, and preparation of carbon-based compounds, hydrocarbons, and their derivatives...
IUPAC nomenclature
IUPAC nomenclature
A chemical nomenclature is a set of rules to generate systematic names for chemical compounds. The nomenclature used most frequently worldwide is the one created and developed by the International Union of Pure and Applied Chemistry ....
and pinpoint the position of substituent
Substituent
In organic chemistry and biochemistry, a substituent is an atom or group of atoms substituted in place of a hydrogen atom on the parent chain of a hydrocarbon...
s other than hydrogen
Hydrogen
Hydrogen is the chemical element with atomic number 1. It is represented by the symbol H. With an average atomic weight of , hydrogen is the lightest and most abundant chemical element, constituting roughly 75% of the Universe's chemical elemental mass. Stars in the main sequence are mainly...
in relation to each other on an aromatic hydrocarbon
Aromatic hydrocarbon
An aromatic hydrocarbon or arene is a hydrocarbon with alternating double and single bonds between carbon atoms. The term 'aromatic' was assigned before the physical mechanism determining aromaticity was discovered, and was derived from the fact that many of the compounds have a sweet scent...
. 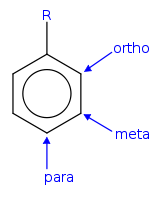 The prefixes ortho, meta, and para are all derived from Greek, meaning straight or correct, following or after, and akin to or similar, respectively. The relationship to the current meaning is perhaps not obvious. The ortho description was historically used to designate the original compound, and an isomer was often called the meta compound. For instance, the trivial names orthophosphoric acid
Phosphoric acids and Phosphates
There are various kinds of phosphoric acids and phosphates. Of the many phosphorus oxoacids, the phosphoric acids constitute the largest and most diverse group. The simplest phosphoric acid series begins with monophosphoric acid, continues with many oligophosphoric acids such as diphosphoric acid...
and trimetaphosphoric acid have nothing to do with aromatics at all. Likewise, the description para was reserved for just closely related compounds. Thus Berzelius
Jöns Jakob Berzelius
Jöns Jacob Berzelius was a Swedish chemist. He worked out the modern technique of chemical formula notation, and is together with John Dalton, Antoine Lavoisier, and Robert Boyle considered a father of modern chemistry...
originally called the racemic
Racemic
In chemistry, a racemic mixture, or racemate , is one that has equal amounts of left- and right-handed enantiomers of a chiral molecule. The first known racemic mixture was "racemic acid", which Louis Pasteur found to be a mixture of the two enantiomeric isomers of tartaric acid.- Nomenclature :A...
form of aspartic acid
Aspartic acid
Aspartic acid is an α-amino acid with the chemical formula HOOCCHCH2COOH. The carboxylate anion, salt, or ester of aspartic acid is known as aspartate. The L-isomer of aspartate is one of the 20 proteinogenic amino acids, i.e., the building blocks of proteins...
paraaspartic acid (another obsolete term: racemic acid
Racemic acid
Racemic acid is an old name for an optically inactive or racemic form of tartaric acid. It is an equal mixture of two mirror-image isomers , optically active in opposing directions....
) in 1830. The use of the descriptions ortho, meta and para for multiple substituted aromatic rings starts with Wilhelm Körner
Wilhelm Korner
Wilhelm Körner, later a.k.a. Guglielmo Körner was a German chemist.-Life:Körner studied chemistry at Giessen, where he graduated in 1860. In 1866 he became assistant to Kekulé at Ghent...
in the period 1866–1874 although he chose to reserve the ortho prefix for the 1,4 isomer and the meta prefix for the 1,2-isomer. The current nomenclature (different again from that of Körner) was introduced by the Chemical Society
Chemical Society
The Chemical Society was formed in 1841 as a result of increased interest in scientific matters....
in 1879 .

Examples of the use of this nomenclature are given for isomer
Isomer
In chemistry, isomers are compounds with the same molecular formula but different structural formulas. Isomers do not necessarily share similar properties, unless they also have the same functional groups. There are many different classes of isomers, like stereoisomers, enantiomers, geometrical...
s of cresol
Cresol
Cresols are organic compounds which are methylphenols. They are a widely occurring natural and manufactured group of aromatic organic compounds which are categorized as phenols . Depending on the temperature, cresols can be solid or liquid because they have melting points not far from room...
:
Catechol has two isomers, the meta isomer resorcinol
Resorcinol
Resorcinol is a dihydroxy benzene. It is the 1,3-isomer of benzenediol with the formula C6H42.-Nomenclature:Benzene-1,3-diol is the name recommended by the International Union of Pure and Applied Chemistry in its 1993 Recommendations for the Nomenclature of Organic Chemistry.-Production:It is...
and the para isomer hydroquinone
Hydroquinone
Hydroquinone, also benzene-1,4-diol or quinol, is an aromatic organic compound that is a type of phenol, having the chemical formula C6H42. Its chemical structure, shown in the table at right, has two hydroxyl groups bonded to a benzene ring in a para position. It is a white granular solid...
:
Phthalic acid
Phthalic acid
Phthalic acid is an aromatic dicarboxylic acid, with formula C6H42. It is an isomer of isophthalic acid and terephthalic acid. Although phthalic acid is of modest commercial importance, the closely related derivative phthalic anhydride is a commodity chemical produced on a large...
has two isomers, the meta isomer isophthalic acid
Isophthalic acid
Isophthalic acid is an organic compound with the formula C6H42. This colourless solid is an isomer of phthalic acid and terephthalic acid. These aromatic dicarboxylic acids are used as precursors to commercially important polymers, e.g. the fire-resistant material Nomex...
and the para isomer terephthalic acid
Terephthalic acid
Terephthalic acid is the organic compound with formula C6H42. This colourless solid is a commodity chemical, used principally as a precursor to the polyester PET, used to make clothing and plastic bottles. Several billion kilograms are produced annually...
:
The source of this article is wikipedia, the free encyclopedia.  The text of this article is licensed under the GFDL.