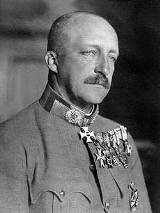 Encyclopedia
Archduke Joseph August Viktor Klemens Maria of Austria, Prince of Hungary and Bohemia (9 August 1872 – 6 July 1962) was for a short period head of state of Hungary
Hungary
Hungary , officially the Republic of Hungary , is a landlocked country in Central Europe. It is situated in the Carpathian Basin and is bordered by Slovakia to the north, Ukraine and Romania to the east, Serbia and Croatia to the south, Slovenia to the southwest and Austria to the west. The...
, a member of the House of Habsburg-Lorraine and the eldest son of Archduke Joseph Karl of Austria (1833–1905) and his wife Princess Clotilde of Saxe-Coburg-Gotha (1846–1927). Joseph August's grandfather had been Palatine Joseph of Hungary (1776–1847), Palatine and Viceroy of Hungary, a younger son of Emperor Leopold II.

He was born at Alcsút
Alcsútdoboz
- History :Archduke Joseph, Palatine of Hungary had his palace there. It was constructed by the renowned architect Mihály Pollack. It was destroyed during World War II, with only the portico remaining.-External links:*...
, Hungary
Hungary
Hungary , officially the Republic of Hungary , is a landlocked country in Central Europe. It is situated in the Carpathian Basin and is bordered by Slovakia to the north, Ukraine and Romania to the east, Serbia and Croatia to the south, Slovenia to the southwest and Austria to the west. The...
. On 15 November 1893, in Munich
Munich
Munich The city's motto is "" . Before 2006, it was "Weltstadt mit Herz" . Its native name, , is derived from the Old High German Munichen, meaning "by the monks' place". The city's name derives from the monks of the Benedictine order who founded the city; hence the monk depicted on the city's coat...
, he married Princess Augusta Maria Louise of Bavaria (1875–1964), daughter of Prince Leopold of Bavaria
Prince Leopold of Bavaria
Leopold Maximilian Joseph Maria Arnulf, Prinz von Bayern was born in Munich, the son of Prince Regent Luitpold of Bavaria and his wife Archduchess Augusta of Austria...
(1846–1930) and his wife Archduchess Gisela of Austria
Archduchess Gisela of Austria
Gisela Louise Marie, Princess Imperial and Archduchess of Austria, Princess of Hungary and Bohemia, Princess of Bavaria was the second daughter and eldest surviving child of Emperor Franz Joseph I of Austria and Empress Elisabeth...
(1856–1932).

Joseph August began his military career in 1890 when he was commissioned into Infantry Regiment #1 as a Leutnant. He was soon promoted to Oberleutnant
Oberleutnant
Oberleutnant is a junior officer rank in the militaries of Germany, Switzerland and Austria. In the German Army, it dates from the early 19th century. Translated as "Senior Lieutenant", the rank is typically bestowed upon commissioned officers after five to six years of active duty...
and was transferred to Infantry Regiment #72 in 1893. He was transferred to Dragoon
Dragoon
The word dragoon originally meant mounted infantry, who were trained in horse riding as well as infantry fighting skills. However, usage altered over time and during the 18th century, dragoons evolved into conventional light cavalry units and personnel...
Regiment #6 in 1894 and then transferred to Honvéd Hussar
Hussar
Hussar refers to a number of types of light cavalry which originated in Hungary in the 14th century, tracing its roots from Serbian medieval cavalry tradition, brought to Hungary in the course of the Serb migrations, which began in the late 14th century....
Regiment #1 by the Kaiser
Kaiser
Kaiser is the German title meaning "Emperor", with Kaiserin being the female equivalent, "Empress". Like the Russian Czar it is directly derived from the Latin Emperors' title of Caesar, which in turn is derived from the personal name of a branch of the gens Julia, to which Gaius Julius Caesar,...
and promoted to the rank of Major
Major
Major is a rank of commissioned officer, with corresponding ranks existing in almost every military in the world.When used unhyphenated, in conjunction with no other indicator of rank, the term refers to the rank just senior to that of an Army captain and just below the rank of lieutenant colonel. ...
. He took command of this regiment in 1904 and then went on to command 79th Honvéd infantry brigade in 1908 then finally the 31st infantry division at Budapest
Budapest
Budapest is the capital of Hungary. As the largest city of Hungary, it is the country's principal political, cultural, commercial, industrial, and transportation centre. In 2011, Budapest had 1,733,685 inhabitants, down from its 1989 peak of 2,113,645 due to suburbanization. The Budapest Commuter...
in 1911.

In 1914 August was involved in combat in the Galician theatre and took command of the VII Corps and was involved in fighting in the Carpathian Mountains
Carpathian Mountains
The Carpathian Mountains or Carpathians are a range of mountains forming an arc roughly long across Central and Eastern Europe, making them the second-longest mountain range in Europe...
. After Italy
Italy
Italy , officially the Italian Republic languages]] under the European Charter for Regional or Minority Languages. In each of these, Italy's official name is as follows:;;;;;;;;), is a unitary parliamentary republic in South-Central Europe. To the north it borders France, Switzerland, Austria and...
became involved in the war he was transferred to the Carinthian
Duchy of Carinthia
The Duchy of Carinthia was a duchy located in southern Austria and parts of northern Slovenia. It was separated from the Duchy of Bavaria in 976, then the first newly created Imperial State beside the original German stem duchies....
border and involved in fighting the Isonzo army. August remained on this front until the 9th battle of the Isonzo in 1916 a period in which once again he was highly decorated. August was highly liked by his troops, especially those of Hungarian nationality.

In November 1916 August was put in command of the Heeresfront fighting against Russia
Russia
Russia or , officially known as both Russia and the Russian Federation , is a country in northern Eurasia. It is a federal semi-presidential republic, comprising 83 federal subjects...
n and Romania
Romania
Romania is a country located at the crossroads of Central and Southeastern Europe, on the Lower Danube, within and outside the Carpathian arch, bordering on the Black Sea...
n forces. In January 1918 he was put in command of the 6th army in the Southern theatre and that July took over the Armeegruppe Tirol, which was the 10th and 11th Armies. Finally he was put in command of the Heeresgruppe Kövess in Balkan theatre. He became the last field marshal
Field Marshal
Field Marshal is a military rank. Traditionally, it is the highest military rank in an army.-Etymology:The origin of the rank of field marshal dates to the early Middle Ages, originally meaning the keeper of the king's horses , from the time of the early Frankish kings.-Usage and hierarchical...
(Generalfeldmarschall
Generalfeldmarschall
Field Marshal or Generalfeldmarschall in German, was a rank in the armies of several German states and the Holy Roman Empire; in the Austrian Empire, the rank Feldmarschall was used...
) of the Austro-Hungarian Army
Austro-Hungarian Army
The Austro-Hungarian Army was the ground force of the Austro-Hungarian Dual Monarchy from 1867 to 1918. It was composed of three parts: the joint army , the Austrian Landwehr , and the Hungarian Honvédség .In the wake of fighting between the...
on October 24, 1918, as an attempt by Kaiser Karl
Karl I of Austria
Charles I of Austria or Charles IV of Hungary was the last ruler of the Austro-Hungarian Empire. He was the last Emperor of Austria, the last King of Hungary, the last King of Bohemia and Croatia and the last King of Galicia and Lodomeria and the last monarch of the House of Habsburg-Lorraine...
to calm Hungarian nationalists.

On October 27, 1918 Emperor Karl made August the "Homo Regius" of Hungary
Hungary
Hungary , officially the Republic of Hungary , is a landlocked country in Central Europe. It is situated in the Carpathian Basin and is bordered by Slovakia to the north, Ukraine and Romania to the east, Serbia and Croatia to the south, Slovenia to the southwest and Austria to the west. The...
, but August asked to be released from his oath of allegiance from the Kaiser. He then began negotiations and appointed Graf János Hadik
János Hadik
János Count Hadik de Futak was a Hungarian politician who served as prime minister for 17 hours starting 30 October 1918, at the end of World War I....
to build a new national government. However the Aster Revolution
Aster Revolution
The Aster Revolution or Chrysanthemum Revolution was a revolution in Hungary led by leftist liberal count Mihály Károlyi, who founded the Hungarian Democratic Republic....
revolution broke out on October 31, 1918, deterring his plans. In November, the independent Hungarian Democratic Republic
Hungarian Democratic Republic
The Hungarian People's Republic was an independent republic proclaimed after the collapse of Austria-Hungary in 1918...
was proclaimed, only to be replaced a few months later by the communist Hungarian Soviet Republic
Hungarian Soviet Republic
The Hungarian Soviet Republic or Soviet Republic of Hungary was a short-lived Communist state established in Hungary in the aftermath of World War I....
. This revolution was to fail : the popular August survived unharmed and once again became the head of state "Reichsverweser" (regent) and appointed a Prime Minister. Since the Allied forces declined to accept Archdukes Joseph as Hungary's head of state, he was forced to resign on 23 August 1919. In 1920 archduke became the first knight of the Hungarian Order of Vitéz
Vitéz
Vitéz, or Order of Vitéz was a Hungarian order of merit which was founded in 1678. It was awarded as a state honour during two periods of Hungarian history...
, in 1927 he became a member of the newly established House of Lords. He later became an honorary member of the Hungarian Academy of Sciences and was its president from 1936-1944. He fled Hungary for the United States
United States
The United States of America is a federal constitutional republic comprising fifty states and a federal district...
in 1944 but later returned to Germany
Germany
Germany , officially the Federal Republic of Germany , is a federal parliamentary republic in Europe. The country consists of 16 states while the capital and largest city is Berlin. Germany covers an area of 357,021 km2 and has a largely temperate seasonal climate...
. He died in 1962 at Rain
Rain, Lower Bavaria
Rain is a municipality in the district of Straubing-Bogen in Bavaria, Germany....
near Straubing
Straubing
Straubing is an independent city in Lower Bavaria, southern Germany. It is seat of the district of Straubing-Bogen. Annually in August the Gäubodenvolksfest, the second largest fair in Bavaria, is held....
.