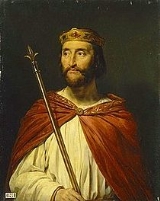 Encyclopedia
Charles III called the Simple or the Straightforward (from the Latin
Latin
Latin is an Italic language originally spoken in Latium and Ancient Rome. It, along with most European languages, is a descendant of the ancient Proto-Indo-European language. Although it is considered a dead language, a number of scholars and members of the Christian clergy speak it fluently, and...
Karolus Simplex), was the undisputed King of France from 898 until 922 and the King of Lotharingia from 911 until 919/23. He was a member of the Carolingian dynasty, the third and posthumous son of Louis the Stammerer
Louis the Stammerer
Louis the Stammerer was the King of Aquitaine and later King of West Francia. He was the eldest son of Charles the Bald and Ermentrude of Orléans. He succeeded his younger brother in Aquitaine in 866 and his father in West Francia in 877, though he was never crowned Emperor...
by his second wife, Adelaide of Paris
Adelaide of Paris
Adélaïde de Paris was the second wife of Louis the Stammerer, King of Western Francia, and was the mother of Charles the Simple.- Life :...
.

As a child, Charles was prevented from succeeding to the throne at the time of the death in 884 of his half-brother Carloman. The nobles of the realm instead asked his cousin, Charles the Fat
Charles the Fat
Charles the Fat was the King of Alemannia from 876, King of Italy from 879, western Emperor from 881, King of East Francia from 882, and King of West Francia from 884. In 887, he was deposed in East Francia, Lotharingia, and possibly Italy, where the records are not clear...
, to rule them. He was also prevented from succeeding the unpopular Charles, who was deposed in November 887 and died in January 888, although it is unknown if his deposition was accepted or even made known in West Francia before his death. The nobility elected Odo, the hero of the Siege of Paris, king, though there was a faction that supported Guy III of Spoleto
Guy III of Spoleto
Guy of Spoleto , sometimes known by the Italian version of his name, Guido, or by the German version, Wido, was the Margrave of Camerino from 880 and then Duke of Spoleto and Camerino from 883. He was crowned King of Italy in 889 and Holy Roman Emperor in 891...
. Charles was put under the protection of Ranulf II
Ranulf II of Aquitaine
Ranulf II was Count of Poitou from 866 and Duke of Aquitaine from 887...
, the Duke of Aquitaine
Duke of Aquitaine
The Duke of Aquitaine ruled the historical region of Aquitaine under the supremacy of Frankish, English and later French kings....
, who may have tried to claim the throne for him and in the end used the royal title himself until making peace with Odo. Finally, in 893 Charles was crowned by a faction opposed to Odo at Reims Cathedral
Reims Cathedral
Notre-Dame de Reims is the Roman Catholic cathedral of Reims, where the kings of France were once crowned. It replaces an older church, destroyed by a fire in 1211, which was built on the site of the basilica where Clovis was baptized by Saint Remi, bishop of Reims, in AD 496. That original...
. He only became the effectual monarch with the death of Odo in 898.

In 911 Charles defeated the Viking
Viking
The term Viking is customarily used to refer to the Norse explorers, warriors, merchants, and pirates who raided, traded, explored and settled in wide areas of Europe, Asia and the North Atlantic islands from the late 8th to the mid-11th century.These Norsemen used their famed longships to...
leader Rollo
Rollo
Rollo has multiple meanings. It may mean:a first name*Rollo Armstrong, member of British dance act Faithless* Rollo May, American psychologist...
, had him sign the Treaty of Saint-Clair-sur-Epte that made Rollo
Rollo
Rollo has multiple meanings. It may mean:a first name*Rollo Armstrong, member of British dance act Faithless* Rollo May, American psychologist...
his vassal and converted him to Christianity. Charles then gave him land around Rouen
Rouen
Rouen , in northern France on the River Seine, is the capital of the Haute-Normandie region and the historic capital city of Normandy. Once one of the largest and most prosperous cities of medieval Europe , it was the seat of the Exchequer of Normandy in the Middle Ages...
, the heart of what would become Normandy
Normandy
Normandy is a geographical region corresponding to the former Duchy of Normandy. It is in France.The continental territory covers 30,627 km² and forms the preponderant part of Normandy and roughly 5% of the territory of France. It is divided for administrative purposes into two régions:...
and his daughter Gisela in marriage. In the same year as the treaty with the Vikings, Louis the Child
Louis the Child
Louis the Child , sometimes called Louis IV or Louis III, was the last Carolingian ruler of East Francia....
, the King of Germany, died and the nobles of Lotharingia
Lotharingia
Lotharingia was a region in northwest Europe, comprising the Low Countries, the western Rhineland, the lands today on the border between France and Germany, and what is now western Switzerland. It was born of the tripartite division in 855, of the kingdom of Middle Francia, itself formed of the...
, who had been loyal to him, under the leadership of Reginar Longneck
Reginar, Duke of Lorraine
Reginar I Longneck was the Duke of Lorraine from 910 until his death. He stands at the head of the clan of Reginarids, an important Lotharingian noble family....
, declared Charles their new king, breaking from Germans who had elected Conrad of Franconia
Conrad I of Germany
Conrad I , called the Younger, was Duke of Franconia from 906 and King of Germany from 911 to 918, the only king of the Conradine dynasty...
king. Charles tried to win their support by marrying a Lotharingian woman named Frederuna, who died in 917. He also defended the country against two attacks by Conrad, King of the Germans.
On 7 October 919 Charles re-married to Eadgifu
Eadgifu of England
Eadgifu or Edgifu, also known as Edgiva or Ogive was a daughter of Edward the Elder, King of Wessex and England, and his second wife Ælfflæd. She was born in Wessex.- Marriage to the French King :...
, the daughter of Edward the Elder
Edward the Elder
Edward the Elder was an English king. He became king in 899 upon the death of his father, Alfred the Great. His court was at Winchester, previously the capital of Wessex...
, King of England. By this time Charles' excessive favouritism towards a certain Hagano
Hagano
Hagano was a petty nobleman who achieved influence in Lotharingia and West Francia during the rule of Charles the Simple . He was a relative of Charles' first wife, Frederuna, and was originally from Lotharingia. Though Frederuna had died in 917, by 918 Hagano had become the king's favourite and...
had turned the aristocracy against him. He endowed Hagano with monasteries which were already the benefices of other barons, alienating these barons. In Lotharingia he earned the enmity of the new duke, Gilbert
Gilbert, Duke of Lorraine
Gilbert was the duke of Lotharingia until 939.The beginning of the reign of Gilbert is not clear. A dux Lotharingiae is mentioned in 910 and this may have been Gilbert...
, who declared for the German king Henry the Fowler in 919. Opposition to Charles in Lotharingia was not universal, however, and he retained the support of Wigeric. In 922 some of the West Frankish barons, led by Robert of Neustria
Robert I of France
Robert I , King of Western Francia , was the younger son of Robert the Strong, count of Anjou, and the brother of Odo, who became king of the Western Franks in 888. West Francia evolved over time into France; under Odo, the capital was fixed on Paris, a large step in that direction...
and Rudolph of Burgundy
Rudolph of France
Rudolph was the Duke of Burgundy between 921 and 923 and King of Western Francia from thereafter to his death. Rudolph inherited the duchy of Burgundy from his father, Richard the Justiciar...
, revolted. Robert, who was Odo's brother, was elected by the rebels and crowned in opposition to Charles, who had to flee to Lotharingia. On 2 July 922, Charles lost his most faithful supporter, Herve, Archbishop of Rheims, who had succeeded Fulk in 900.

He returned the next year (923) with a Norman army but was defeated on 15 June near Soissons
Soissons
Soissons is a commune in the Aisne department in Picardy in northern France, located on the Aisne River, about northeast of Paris. It is one of the most ancient towns of France, and is probably the ancient capital of the Suessiones...
by Robert, who died in the battle. Charles was captured and imprisoned in a castle at Péronne
Péronne, Somme
Péronne is a commune of the Somme department in Picardie in northern France.It is close to where the Battles of the Somme took place during World War I...
under the guard of Herbert II of Vermandois. Rudolph was elected to succeed him. In 925 the Lotharingians accepted Rudolph as their king. Charles died in prison on 7 October 929 and was buried at the nearby abbey of Saint-Fursy. Though he had had many children by Frederuna, it was his son by Eadgifu who would eventually be crowned in 936 as Louis IV of France
Louis IV of France
Louis IV , called d'Outremer or Transmarinus , reigned as King of Western Francia from 936 to 954...
. In the initial aftermath of Charles's defeat, Eadgifu and Louis fled to England.