Encyclopedia
The Apalachicola River is a river, approximately 112 mi (180 km) long in the State of Florida. This river's large watershed, known as the ACF River Basin
ACF River Basin
The ACF River Basin is the watershed of the Apalachicola/Chattahoochee/Flint River Basin, in the United States, that begins in northern Georgia and flows into the Gulf of Mexico at Apalachicola Bay, near Apalachicola, Florida...
for short, drains an area of approximately 19500 square miles (50,504.8 km²) into the Gulf of Mexico
Gulf of Mexico
The Gulf of Mexico is a partially landlocked ocean basin largely surrounded by the North American continent and the island of Cuba. It is bounded on the northeast, north and northwest by the Gulf Coast of the United States, on the southwest and south by Mexico, and on the southeast by Cuba. In...
. The distance to its farthest headstream in northeast Georgia
Georgia (U.S. state)
Georgia is a state located in the southeastern United States. It was established in 1732, the last of the original Thirteen Colonies. The state is named after King George II of Great Britain. Georgia was the fourth state to ratify the United States Constitution, on January 2, 1788...
is approximately 500 miles (800 km). Its name comes from the Apalachicola tribe
Apalachicola (tribe)
The Apalachicola were a group of Native Americans related to the Creek. They spoke a Muskogean language related to Hitchiti. They lived along the Apalachicola River in present-day Florida....
, which used to live along the river.

It is formed on the state line between Florida and Georgia, near the town of Chattahoochee, Florida
Chattahoochee, Florida
Chattahoochee is a city in Gadsden County, Florida, United States. The population was 3,287 at the 2000 census. According to the U.S Census estimates of 2005, the city had a population of 3,720. It is part of the Tallahassee, Florida Metropolitan Statistical Area.-Geography:Chattahoochee is...
, approximately 60 miles northeast of Panama City, by the confluence of the Flint
Flint River (Georgia)
The Flint River is a river in the U.S. state of Georgia. The river drains of western Georgia, flowing south from the upper Piedmont region south of Atlanta to the wetlands of the Gulf Coastal Plain in the southwestern corner of the state. Along with the Apalachicola and the Chattahoochee rivers,...
and Chattahoochee
Chattahoochee River
The Chattahoochee River flows through or along the borders of the U.S. states of Georgia, Alabama, and Florida. It is a tributary of the Apalachicola River, a relatively short river formed by the confluence of the Chattahoochee and Flint Rivers and emptying into Apalachicola Bay in the Gulf of...
rivers. The actual confluence is submerged in the Lake Seminole
Lake Seminole
Lake Seminole is a reservoir located in the southwest corner of Georgia along its border with Florida, maintained by the U.S. Army Corps of Engineers. The Chattahoochee and Flint rivers join in the lake, before flowing from the Jim Woodruff Lock and Dam, which impounds the lake, as the Apalachicola...
reservoir formed by the Jim Woodruff Dam
Jim Woodruff Dam
Jim Woodruff Dam is a hydroelectric dam on the Apalachicola River, about south of that river's origin at the confluence of the Flint and Chattahoochee Rivers. The dam is named in honor of James W. Woodruff, Sr., a Georgia businessman who spearheaded the development of the...
. It flows generally south through the forests of the Florida Panhandle
Florida Panhandle
The Florida Panhandle, an informal, unofficial term for the northwestern part of Florida, is a strip of land roughly 200 miles long and 50 to 100 miles wide , lying between Alabama on the north and the west, Georgia also on the north, and the Gulf of Mexico to the south. Its eastern boundary is...
, past Bristol. In northern Gulf County, it receives the Chipola River
Chipola River
The Chipola River is a tributary of the Apalachicola River in Florida. The river crosses Jackson, Calhoun and Gulf counties. The river flows into the Dead Lakes State Recreation Area just before reaching the Apalachicola. The Dead Lakes were formed when the Apalachicola deposited sand bars...
from the west. It flows into Apalachicola Bay
Apalachicola Bay
Apalachicola Bay is an estuary and lagoon located on Florida's northwest coast renowned for its oysters. The Apalachicola Bay system also includes St. Georges Sound, St. Vincent Sound and East Bay, covering an area of about . Four islands St. Vincent Island to the west, Cape St. George Island and St...
, an inlet of the Gulf of Mexico, at Apalachicola. The lower 30 mi (48 km) of the river is surrounded by extensive swamp
Swamp
A swamp is a wetland with some flooding of large areas of land by shallow bodies of water. A swamp generally has a large number of hammocks, or dry-land protrusions, covered by aquatic vegetation, or vegetation that tolerates periodical inundation. The two main types of swamp are "true" or swamp...
s and wetlands except at the coast. The channel of the river is being dredged by the U.S. Army Corps of Engineers
United States Army Corps of Engineers
The United States Army Corps of Engineers is a federal agency and a major Army command made up of some 38,000 civilian and military personnel, making it the world's largest public engineering, design and construction management agency...
to provide navigation due to a lawsuit with Florida. Except for the area around its mouth, the river serves as the boundary between the Eastern
North American Eastern Time Zone
The Eastern Time Zone of the United States and Canada is a time zone that falls mostly along the east coast of North America. Its UTC time offset is −5 hrs during standard time and −4 hrs during daylight saving time...
and Central
Central Time zone
In North America, the Central Time Zone refers to national time zones which observe standard time by subtracting six hours from UTC , and daylight saving, or summer time by subtracting five hours...
time zones in the United States. 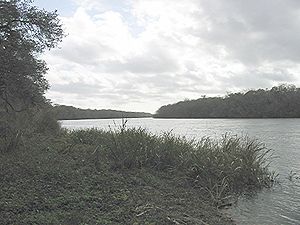 The basin of the Apalachicola River is noted for its tupelo honey, a high-quality monofloral honey
Monofloral honey
Monofloral honey is a type of honey which has a high value in the marketplace because it has a distinctive flavor or other attribute due to its being predominantly from the nectar of one plant species....
, which is produced wherever the tupelo
Tupelo
The tupelo , black gum, or pepperidge tree, genus Nyssa , is a small genus of about 9 to 11 species of trees with alternate, simple leaves...
trees bloom in the southeastern United States. The purest and most expensive version (which is certified by pollen analysis
Melissopalynology
Melissopalynology is the study of pollen contained in honey and, in particular, the pollen's source. By studying the pollen in a sample of honey, it is possible to gain evidence of the geographical location and genus of the plants that the honey bees visited, although honey may also contain...
) is produced mainly in this basin and, to a lesser extent, in other panhandle river basins. In a good harvest year, the value of the tupelo honey crop produced by a group of specialized Florida beekeepers approaches $900,000 each spring.