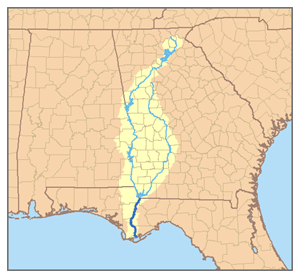 The ACF River Basin is the watershed
Drainage basin
A drainage basin is an extent or an area of land where surface water from rain and melting snow or ice converges to a single point, usually the exit of the basin, where the waters join another waterbody, such as a river, lake, reservoir, estuary, wetland, sea, or ocean...
of the Apalachicola
Apalachicola River
The Apalachicola River is a river, approximately 112 mi long in the State of Florida. This river's large watershed, known as the ACF River Basin for short, drains an area of approximately into the Gulf of Mexico. The distance to its farthest headstream in northeast Georgia is approximately 500...
/Chattahoochee
Chattahoochee River
The Chattahoochee River flows through or along the borders of the U.S. states of Georgia, Alabama, and Florida. It is a tributary of the Apalachicola River, a relatively short river formed by the confluence of the Chattahoochee and Flint Rivers and emptying into Apalachicola Bay in the Gulf of...
/Flint
Flint River (Georgia)
The Flint River is a river in the U.S. state of Georgia. The river drains of western Georgia, flowing south from the upper Piedmont region south of Atlanta to the wetlands of the Gulf Coastal Plain in the southwestern corner of the state. Along with the Apalachicola and the Chattahoochee rivers,...
River
River
A river is a natural watercourse, usually freshwater, flowing towards an ocean, a lake, a sea, or another river. In a few cases, a river simply flows into the ground or dries up completely before reaching another body of water. Small rivers may also be called by several other names, including...
Basin, in the United States
United States
The United States of America is a federal constitutional republic comprising fifty states and a federal district...
, that begins in northern Georgia
Georgia (U.S. state)
Georgia is a state located in the southeastern United States. It was established in 1732, the last of the original Thirteen Colonies. The state is named after King George II of Great Britain. Georgia was the fourth state to ratify the United States Constitution, on January 2, 1788...
and flows into the Gulf of Mexico
Gulf of Mexico
The Gulf of Mexico is a partially landlocked ocean basin largely surrounded by the North American continent and the island of Cuba. It is bounded on the northeast, north and northwest by the Gulf Coast of the United States, on the southwest and south by Mexico, and on the southeast by Cuba. In...
at Apalachicola Bay
Apalachicola Bay
Apalachicola Bay is an estuary and lagoon located on Florida's northwest coast renowned for its oysters. The Apalachicola Bay system also includes St. Georges Sound, St. Vincent Sound and East Bay, covering an area of about . Four islands St. Vincent Island to the west, Cape St. George Island and St...
, near Apalachicola, Florida
Apalachicola, Florida
Apalachicola is a city in Franklin County, Florida, on US 98 about southwest of Tallahassee. The population was 2,334 at the 2000 census. The 2005 census estimated the city's population at 2,340...
. The basin drains an area of more than 19,300 square miles (50,000 km²).

These states and Alabama
Alabama
Alabama is a state located in the southeastern region of the United States. It is bordered by Tennessee to the north, Georgia to the east, Florida and the Gulf of Mexico to the south, and Mississippi to the west. Alabama ranks 30th in total land area and ranks second in the size of its inland...
have been involved in a water-use dispute for two decades, known as the Tri-state water dispute
Tri-state water dispute
The tri-state water dispute is a water use debate among the states of Georgia, Alabama, and Florida over the Apalachicola-Chattahoochee-Flint River Basin and the Alabama-Coosa-Tallapoosa River Basin...
. Georgia has also lobbied the United States Congress
United States Congress
The United States Congress is the bicameral legislature of the federal government of the United States, consisting of the Senate and the House of Representatives. The Congress meets in the United States Capitol in Washington, D.C....
to end navigation
Navigation
Navigation is the process of monitoring and controlling the movement of a craft or vehicle from one place to another. It is also the term of art used for the specialized knowledge used by navigators to perform navigation tasks...
on the Appalachicola and lower Chattahoochee, to conserve more water during droughts. Keeping the two rivers at a navigable depth during these times requires large releases from dam
Dam
A dam is a barrier that impounds water or underground streams. Dams generally serve the primary purpose of retaining water, while other structures such as floodgates or levees are used to manage or prevent water flow into specific land regions. Hydropower and pumped-storage hydroelectricity are...
s upstream, sending potential drinking water downstream for shipping, and often dropping lakes to levels dangerous to boaters.

Other concerns include harvests of oyster
Oyster
The word oyster is used as a common name for a number of distinct groups of bivalve molluscs which live in marine or brackish habitats. The valves are highly calcified....
s in Apalachicola Bay, which require a large enough flow of fresh water to prevent excessive saltwater intrusion
Saltwater intrusion
Saltwater intrusion is the movement of saline water into freshwater aquifers. Most often, it is caused by ground-water pumping from coastal wells, or from construction of navigation channels or oil field canals. The channels and canals provide conduits for salt water to be brought into fresh...
from the Gulf. The cost of dredging silt
Silt
Silt is granular material of a size somewhere between sand and clay whose mineral origin is quartz and feldspar. Silt may occur as a soil or as suspended sediment in a surface water body...
, much of it from uncontrolled growth across metro Atlanta's fine red clay soil, has also been called wasteful to float so little ship traffic.