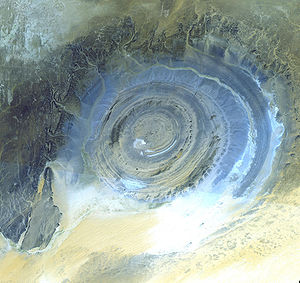 In structural geology
Structural geology
Structural geology is the study of the three-dimensional distribution of rock units with respect to their deformational histories. The primary goal of structural geology is to use measurements of present-day rock geometries to uncover information about the history of deformation in the rocks, and...
, a dome is a deformational feature consisting of symmetrically-dipping anticline
Anticline
In structural geology, an anticline is a fold that is convex up and has its oldest beds at its core. The term is not to be confused with antiform, which is a purely descriptive term for any fold that is convex up. Therefore if age relationships In structural geology, an anticline is a fold that is...
s; their general outline on a geologic map
Map
A map is a visual representation of an area—a symbolic depiction highlighting relationships between elements of that space such as objects, regions, and themes....
is circular or oval. The strata in a dome are upwarped in the center; if the top of a dome is eroded off, the result will be a series of concentric strata that grow progressively older from the outside-in, with the oldest rocks exposed at the center. Many geologic domes are too large to be appreciated from the surface, and are apparent only in maps. Well-known regional structural domes include the Llano Uplift
Llano Uplift
The Llano Uplift is a roughly circular geologic dome of Precambrian rock, primarily granite, in Central Texas in the United States. It is located in the eastern region of the Edwards Plateau, west of the Texas Hill Country...
and the Ozark Dome
The Ozarks
The Ozarks are a physiographic and geologic highland region of the central United States. It covers much of the southern half of Missouri and an extensive portion of northwestern and north central Arkansas...
.

Localized domes may be formed when magma
Magma
Magma is a mixture of molten rock, volatiles and solids that is found beneath the surface of the Earth, and is expected to exist on other terrestrial planets. Besides molten rock, magma may also contain suspended crystals and dissolved gas and sometimes also gas bubbles. Magma often collects in...
forms a shallow intrusion warping the overlying strata
Stratum
In geology and related fields, a stratum is a layer of sedimentary rock or soil with internally consistent characteristics that distinguish it from other layers...
. An example would be the laccolith
Laccolith
A laccolith is a sheet intrusion that has been injected between two layers of sedimentary rock. The pressure of the magma is high enough that the overlying strata are forced upward, giving the laccolith a dome or mushroom-like form with a generally planar base.Laccoliths tend to form at relatively...
domes of the Henry Mountains
Henry Mountains
The Henry Mountains are located in the southeastern portion of the U.S. state of Utah and run in a generally north-south direction, extending over a distance of about 30 miles . They were named by John Wesley Powell in honour of Joseph Henry, the first secretary of the Smithsonian Institution. The...
of southeastern Utah
Utah
Utah is a state in the Western United States. It was the 45th state to join the Union, on January 4, 1896. Approximately 80% of Utah's 2,763,885 people live along the Wasatch Front, centering on Salt Lake City. This leaves vast expanses of the state nearly uninhabited, making the population the...
. Salt dome
Salt dome
A salt dome is a type of structural dome formed when a thick bed of evaporite minerals found at depth intrudes vertically into surrounding rock strata, forming a diapir....
s are formed above a diapir
Diapir
A diapir is a type of intrusion in which a more mobile and ductily-deformable material is forced into brittle overlying rocks. Depending on the tectonic environment, diapirs can range from idealized mushroom-shaped Rayleigh-Taylor instability-type structures in regions with low tectonic stress...
ic intrusion of low density evaporite
Evaporite
Evaporite is a name for a water-soluble mineral sediment that result from concentration and crystallization by evaporation from an aqueous solution. There are two types of evaporate deposits, marine which can also be described as ocean deposits, and non-marine which are found in standing bodies of...
rocks.