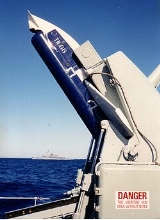 Encyclopedia
An anti-submarine missile is a standoff weapon including a rocket
Rocket
A rocket is a missile, spacecraft, aircraft or other vehicle which obtains thrust from a rocket engine. In all rockets, the exhaust is formed entirely from propellants carried within the rocket before use. Rocket engines work by action and reaction...
designed to rapidly deliver an explosive
Explosive material
An explosive material, also called an explosive, is a reactive substance that contains a great amount of potential energy that can produce an explosion if released suddenly, usually accompanied by the production of light, heat, sound, and pressure...
warhead
Warhead
The term warhead refers to the explosive material and detonator that is delivered by a missile, rocket, or torpedo.- Etymology :During the early development of naval torpedoes, they could be equipped with an inert payload that was intended for use during training, test firing and exercises. This...
or homing torpedo
Torpedo
The modern torpedo is a self-propelled missile weapon with an explosive warhead, launched above or below the water surface, propelled underwater towards a target, and designed to detonate either on contact with it or in proximity to it.The term torpedo was originally employed for...
from the launch platform to the vicinity of a submarine
Submarine
A submarine is a watercraft capable of independent operation below the surface of the water. It differs from a submersible, which has more limited underwater capability...
. 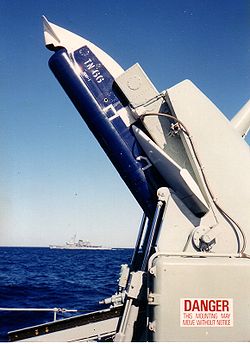 Depth charge
Depth charge
A depth charge is an anti-submarine warfare weapon intended to destroy or cripple a target submarine by the shock of exploding near it. Most use explosives and a fuze set to go off at a preselected depth in the ocean. Depth charges can be dropped by either surface ships, patrol aircraft, or from...
s were the earliest weapons designed for use by ships against submerged submarines. These explosives were initially dropped as the ship moved over the presumed location of a submarine; but shipboard SONAR
Sonar
Sonar is a technique that uses sound propagation to navigate, communicate with or detect other vessels...
was unable to maintain contact with the submarine at close range. Various mortar
Mortar (weapon)
A mortar is an indirect fire weapon that fires explosive projectiles known as bombs at low velocities, short ranges, and high-arcing ballistic trajectories. It is typically muzzle-loading and has a barrel length less than 15 times its caliber....
-type projectors (including hedgehog
Hedgehog (weapon)
The Hedgehog was an anti-submarine weapon developed by the Royal Navy during World War II, that was deployed on convoy escort warships such as destroyers to supplement the depth charge. The weapon worked by firing a number of small spigot mortar bombs from spiked fittings...
and squid
Squid (weapon)
Squid was a British World War II ship-mounted anti-submarine weapon. It consisted of a three-barrelled mortar which launched depth charges. It replaced the Hedgehog system, and was in turn replaced by the Limbo system....
) were devised during World War II
World War II
World War II, or the Second World War , was a global conflict lasting from 1939 to 1945, involving most of the world's nations—including all of the great powers—eventually forming two opposing military alliances: the Allies and the Axis...
to allow a ship to maintain SONAR contact while lobbing explosive charges toward the submarine. During the cold war
Cold War
The Cold War was the continuing state from roughly 1946 to 1991 of political conflict, military tension, proxy wars, and economic competition between the Communist World—primarily the Soviet Union and its satellite states and allies—and the powers of the Western world, primarily the United States...
, rockets were developed to provide greater range with reduced recoil. Some rockets carry homing torpedoes to provide terminal guidance for the warhead.