Encyclopedia
Anti-Qing sentiment refers to a sentiment principally held in China
China
Chinese civilization may refer to:* China for more general discussion of the country.* Chinese culture* Greater China, the transnational community of ethnic Chinese.* History of China* Sinosphere, the area historically affected by Chinese culture...
against the Manchu ruling during Qing Dynasty
Qing Dynasty
The Qing Dynasty was the last dynasty of China, ruling from 1644 to 1912 with a brief, abortive restoration in 1917. It was preceded by the Ming Dynasty and followed by the Republic of China....
(1644–1912), which was often resented for being foreign and barbaric
Barbarian
Barbarian and savage are terms used to refer to a person who is perceived to be uncivilized. The word is often used either in a general reference to a member of a nation or ethnos, typically a tribal society as seen by an urban civilization either viewed as inferior, or admired as a noble savage...
. The Qing accused of destroying traditional Chinese culture by banning traditional Chinese clothes (the hanfu) and forcing Chinese to wear their hair in a queue
Queue (hairstyle)
The queue or cue is a hairstyle in which the hair is worn long and gathered up into a ponytail. It was worn traditionally by certain Native American groups and the Manchu of Manchuria.-Manchu Queue:...
in the Manchu style. It was blamed for suppressing Chinese science, causing China to be transformed from the world's premiere power to a poor, backwards nation. The people of the Eight Banners
Eight Banners
The Eight Banners were administrative divisions into which all Manchu families were placed. They provided the basic framework for the Manchu military organization...
enjoyed much better social welfare than the non-Manchu population. The slogan "Oppose the Qing, Restore the Ming" (反清复明, fǎn Qing, fù Míng) was used by Sun Yat-sen
Sun Yat-sen
Sun Yat-sen was a Chinese doctor, revolutionary and political leader. As the foremost pioneer of Nationalist China, Sun is frequently referred to as the "Father of the Nation" , a view agreed upon by both the People's Republic of China and the Republic of China...
during the Xinhai Revolution
Xinhai Revolution
The Xinhai Revolution or Hsinhai Revolution, also known as Revolution of 1911 or the Chinese Revolution, was a revolution that overthrew China's last imperial dynasty, the Qing , and established the Republic of China...
which overthrew the Qing dynasty in 1912.

In the broadest sense, an anti-Qing activist was anyone who engaged in anti-Manchu direct action
Direct action
Direct action is activity undertaken by individuals, groups, or governments to achieve political, economic, or social goals outside of normal social/political channels. This can include nonviolent and violent activities which target persons, groups, or property deemed offensive to the direct action...
. This included people from many mainstream political movements and uprisings, such as Taiping Rebellion
Taiping Rebellion
The Taiping Rebellion was a widespread civil war in southern China from 1850 to 1864, led by heterodox Christian convert Hong Xiuquan, who, having received visions, maintained that he was the younger brother of Jesus Christ, against the ruling Manchu-led Qing Dynasty...
, the Xinhai revolution
Xinhai Revolution
The Xinhai Revolution or Hsinhai Revolution, also known as Revolution of 1911 or the Chinese Revolution, was a revolution that overthrew China's last imperial dynasty, the Qing , and established the Republic of China...
, the Revive China Society
Revive China Society
The Hsing Chung Hui or Xingzhonghui translated as the Revive China Society, Society for Regenerating China, Proper China Society was founded by Sun Yat-sen on 24 November 1894 to forward the goal of establishing prosperity for China and as a platform for future revolutionary activities...
, the Tongmenghui
Tongmenghui
The Tongmenghui, also known as the Chinese United League, United League, Chinese Revolutionary Alliance, Chinese Alliance and United Allegiance Society, was a secret society and underground resistance movement formed when merging many Chinese revolutionary groups together by Sun Yat-sen, Song...
, the Panthay Rebellion, White Lotus Rebellion
White Lotus Rebellion
The White Lotus Rebellion was a rebellion that occurred during the Qing Dynasty of China. It broke out in 1796 among impoverished settlers in the mountainous region that separates Sichuan province from Hubei and Shaanxi provinces...
, and others. 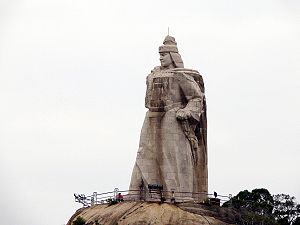 Zheng Chenggong
Koxinga
Koxinga is the customary Western spelling of the popular appellation of Zheng Chenggong , a military leader who was born in 1624 in Hirado, Japan to Zheng Zhilong, a Chinese merchant/pirate, and his Japanese wife and died in 1662 on the island of Formosa .A Ming loyalist and the arch commander of...
(鄭成功) (1624–1662), son of Zheng Zhilong
Zheng Zhilong
Zheng Zhilong also known as Nicholas Iquan Gaspard, a native of Nan'an, Fujian, China. He was a Chinese merchant, pirate and admiral for the Ming Empire. He was the father of Zheng Chenggong , also a military leader. Under the Qing Dynasty, Zheng was elevated to the rank of Count of the Second Rank...
(a Han Chinese
Han Chinese
Han Chinese are an ethnic group native to China and are the largest single ethnic group in the world.Han Chinese constitute about 92% of the population of the People's Republic of China , 98% of the population of the Republic of China , 78% of the population of Singapore, and about 20% of the...
) and Tagawa Matsu
Tagawa Matsu
Tagawa Matsu , or Weng-shi , was the mother of Koxinga, a Chinese national hero, and Tagawa Shichizaemon , a servant to a Japanese feudal lord. She was a Nagasaki Japanese who lived most of her life in the coastal town of Hirado, then later migrated to China...
(Japanese), was a prominent leader of a military movement that opposed the Qing Dynasty
Qing Dynasty
The Qing Dynasty was the last dynasty of China, ruling from 1644 to 1912 with a brief, abortive restoration in 1917. It was preceded by the Ming Dynasty and followed by the Republic of China....
from the 1640s to the 1660s. He is considered to be a Han-Chinese "ethnic hero" (民族英雄).

Hong Xiuquan
Hong Xiuquan
Hong Xiuquan , born Hong Renkun, style name Huoxiu , was a Hakka Chinese who led the Taiping Rebellion against the Qing Dynasty, establishing the Taiping Heavenly Kingdom over varying portions of southern China, with himself as the "Heavenly King" and self-proclaimed brother of Jesus Christ.-Early...
(洪秀全, Hóng Xiùquán) was a Hakka
Hakka people
The Hakka , sometimes Hakka Han, are Han Chinese who speak the Hakka language and have links to the provincial areas of Guangdong, Jiangxi, Guangxi, Sichuan, Hunan and Fujian in China....
Chinese who was the leader of the Taiping Rebellion
Taiping Rebellion
The Taiping Rebellion was a widespread civil war in southern China from 1850 to 1864, led by heterodox Christian convert Hong Xiuquan, who, having received visions, maintained that he was the younger brother of Jesus Christ, against the ruling Manchu-led Qing Dynasty...
(1850–1864) against the Qing Dynasty. He proclaimed himself to be the Heavenly King and called Jesus Christ his brother.

Born in Sichuan province in West China in 1885 to a merchant family, Zou (1885–1905) received a classical education but refused to sit for the civil service exams. He worked as a seal carver while pursuing classical studies. He gradually became interested in Western ideas and went to Japan to study in 1901, where he was exposed to radical revolutionary and anti-Manchu ideas.

Here are some quotations of Zou Rong:

"Sweep away millennia of despotism in all its forms, throw off millennia of slavishness, annihilate the five million and more of the furry and horned Manchu race, cleanse ourselves of 260 years of harsh and unremitting pain"

"I do not begrudge repeating over and over again that internally we are slaves of the Manchus and suffering from their tyranny, externally we are being harassed by the Powers, and we are doubly enslaved."

"Kill the emperor set up by the Manchus as a warning to the myriad generations that despotic government is not to be revived."

"Settle the name of the country as the Republic of China."


Overthrow of the Qing

In 1911 Xinhai revolution
Xinhai Revolution
The Xinhai Revolution or Hsinhai Revolution, also known as Revolution of 1911 or the Chinese Revolution, was a revolution that overthrew China's last imperial dynasty, the Qing , and established the Republic of China...
aries proclaimed that Han and Muslims were equal, but deliberately left out the Manchus in the original proclamation, and thus "can be seen as sanctioning" the massacre of Manchus in Xi'an. The Muslims, led by Ma Anliang
Ma Anliang
Ma Anliang , a Hui, was born in 1855, in Linxia, Gansu, China. He became a general in the Qing dynasty army, and of the Republic of China. His father was Ma Zhanao, and his younger brother was Ma Guoliang...
and Ma Qi
Ma Qi
Ma Qi was a Chinese Muslim warlord in early 20th century China.-Early life:His grandfather Sa-la Ma , is a Salar. He was born in 1869 in Daohe, now part of Linxia, Gansu, China. His father was Ma Haiyan...
proceeded to ignore the proclamation, and continued to fight for Qing against the revolutionaries. After the Manchu men in Xi'an were all killed, the Chinese Muslims
Hui people
The Hui people are an ethnic group in China, defined as Chinese speaking people descended from foreign Muslims. They are typically distinguished by their practice of Islam, however some also practice other religions, and many are direct descendants of Silk Road travelers.In modern People's...
rescued attractive Manchu girls and converted them into Islam.