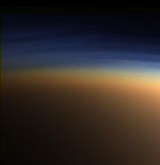 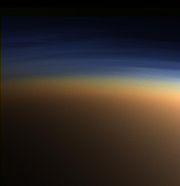 The haze
Haze
Haze is traditionally an atmospheric phenomenon where dust, smoke and other dry particles obscure the clarity of the sky. The World Meteorological Organization manual of codes includes a classification of horizontal obscuration into categories of fog, ice fog, steam fog, mist, haze, smoke, volcanic...
containing organic molecules in Titan's
Titan (moon)
Titan , or Saturn VI, is the largest moon of Saturn, the only natural satellite known to have a dense atmosphere, and the only object other than Earth for which clear evidence of stable bodies of surface liquid has been found....
upper atmosphere absorbs 90% of the solar radiation reaching Titan, but is inefficient at trapping infrared radiation generated by the surface. Although a large greenhouse effect does keep Titan at a much higher temperature than the thermal equilibrium,See also McKay, ""Titan: Greenhouse and Anti-greenhouse," Astrobiology Magazine November 03, 2005 (retrieved October 3, 2008) Titan also exhibits an "anti-greenhouse" effect, which partially compensates for the greenhouse warming, and keeps the surface approximately 9°C (16°F) cooler than would otherwise be expected from the greenhouse effect alone. According to McKay et al., "the anti-greenhouse effect on Titan reduces the surface temperature by 9 K whereas the greenhouse effect increases it by 21 K. The net effect is that the surface temperature (94 K) is 12 K warmer than the effective temperature
Effective temperature
The effective temperature of a body such as a star or planet is the temperature of a black body that would emit the same total amount of electromagnetic radiation...
82 K. [i.e., the equilibrium that would be reached in the absence of any atmosphere]"

In addition, this effect results in a permanently inverted thermocline
Thermocline
A thermocline is a thin but distinct layer in a large body of fluid , in which temperature changes more rapidly with depth than it does in the layers above or below...
on Titan with atmospheric temperatures increasing with increasing altitude above the tropopause. This type of anti-greenhouse effect is only known to occur on Titan, however it is similar to the cooling effects suggested for nuclear winter
Nuclear winter
Nuclear winter is a predicted climatic effect of nuclear war. It has been theorized that severely cold weather and reduced sunlight for a period of months or even years could be caused by detonating large numbers of nuclear weapons, especially over flammable targets such as cities, where large...
.

A different mechanism exists on Pluto, which is not a true anti-greenhouse effect. Sunlight striking the nitrogen
Nitrogen
Nitrogen is a chemical element that has the symbol N, atomic number of 7 and atomic mass 14.00674 u. Elemental nitrogen is a colorless, odorless, tasteless, and mostly inert diatomic gas at standard conditions, constituting 78.08% by volume of Earth's atmosphere...
ice on the surface of dwarf planet
Dwarf planet
A dwarf planet, as defined by the International Astronomical Union , is a celestial body orbiting the Sun that is massive enough to be spherical as a result of its own gravity but has not cleared its neighboring region of planetesimals and is not a satellite...
Pluto
Pluto
Pluto, formal designation 134340 Pluto, is the second-most-massive known dwarf planet in the Solar System and the tenth-most-massive body observed directly orbiting the Sun...
causes it to sublimate
Sublimation (physics)
Sublimation is the process of transition of a substance from the solid phase to the gas phase without passing through an intermediate liquid phase...
; this causes the temperature of Pluto to be about 10°C (20°F) lower than its moon Charon
Charon (moon)
Charon is the largest satellite of the dwarf planet Pluto. It was discovered in 1978 at the United States Naval Observatory Flagstaff Station. Following the 2005 discovery of two other natural satellites of Pluto , Charon may also be referred to as Pluto I...
. The sublimation causes cooling, and is similar to solar radiation directly evaporating ice on Earth, and the reverse of frost forming; however when this occurs on Earth it is not called an anti-greenhouse effect. This effect was discovered using the Submillimeter Array
Submillimeter Array
The Submillimeter Array consists of eight diameter radio telescopes arranged as an interferometer for submillimeter wavelength observations. It is the first purpose-built submillimeter interferometer, constructed after successful interferometry experiments using the pre-existing James Clerk...
in Hawaii
Hawaii
Hawaii is the newest of the 50 U.S. states , and is the only U.S. state made up entirely of islands. It is the northernmost island group in Polynesia, occupying most of an archipelago in the central Pacific Ocean, southwest of the continental United States, southeast of Japan, and northeast of...
.
The source of this article is wikipedia, the free encyclopedia.  The text of this article is licensed under the GFDL.