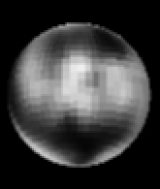 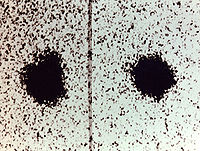 Charon was discovered by astronomer James Christy on June 22, 1978, when he was examining highly magnified images of Pluto
Pluto
Pluto, formal designation 134340 Pluto, is the second-most-massive known dwarf planet in the Solar System and the tenth-most-massive body observed directly orbiting the Sun...
on photographic plate
Photographic plate
Photographic plates preceded photographic film as a means of photography. A light-sensitive emulsion of silver salts was applied to a glass plate. This form of photographic material largely faded from the consumer market in the early years of the 20th century, as more convenient and less fragile...
s taken a couple of months earlier. Christy noticed that a slight elongation appeared periodically. The discovery was announced on July 7, 1978. Later, the bulge was confirmed on plates dating back to April 29, 1965.

Subsequent observations of Pluto determined that the bulge was due to a smaller accompanying body. The periodicity of the bulge corresponded to Pluto's rotation period, which was previously known from Pluto's light curve
Light curve
In astronomy, a light curve is a graph of light intensity of a celestial object or region, as a function of time. The light is usually in a particular frequency interval or band...
. This indicated a synchronous orbit
Synchronous orbit
A synchronous orbit is an orbit in which an orbiting body has a period equal to the average rotational period of the body being orbited , and in the same direction of rotation as that body.-Properties:...
, which strongly suggested that the bulge effect was real and not spurious.

All doubts were erased when Pluto and Charon entered a five-year period of mutual eclipses and transits
Solar eclipses on Pluto
Solar eclipses on Pluto are caused when one of its four natural satellites – Charon, Nix, Hydra, and P4 – passes in front of the Sun, blocking its light....
between 1985 and 1990. This occurs when the Pluto–Charon orbital plane
Orbital plane (astronomy)
All of the planets, comets, and asteroids in the solar system are in orbit around the Sun. All of those orbits line up with each other making a semi-flat disk called the orbital plane. The orbital plane of an object orbiting another is the geometrical plane in which the orbit is embedded...
is edge-on as seen from Earth, which only happens at two intervals in Pluto's 248-year orbital period. It was fortuitous that one of these intervals happened to occur so soon after Charon's discovery. 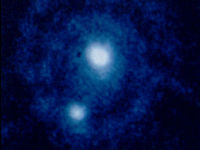 Images showing Pluto and Charon resolved into separate disks were taken for the first time by the Hubble Space Telescope
Hubble Space Telescope
The Hubble Space Telescope is a space telescope that was carried into orbit by a Space Shuttle in 1990 and remains in operation. A 2.4 meter aperture telescope in low Earth orbit, Hubble's four main instruments observe in the near ultraviolet, visible, and near infrared...
in the 1990s. Later, the development of adaptive optics
Adaptive optics
Adaptive optics is a technology used to improve the performance of optical systems by reducing the effect of wavefront distortions. It is used in astronomical telescopes and laser communication systems to remove the effects of atmospheric distortion, and in retinal imaging systems to reduce the...
made it possible to resolve Pluto and Charon into separate disks using ground-based telescopes.

Photometric mapping of Charon's surface shows a latitudinal trend in albedo
Albedo
Albedo , or reflection coefficient, is the diffuse reflectivity or reflecting power of a surface. It is defined as the ratio of reflected radiation from the surface to incident radiation upon it...
, with a bright equator band and darker poles. In particular the south polar region seems darker than the north. 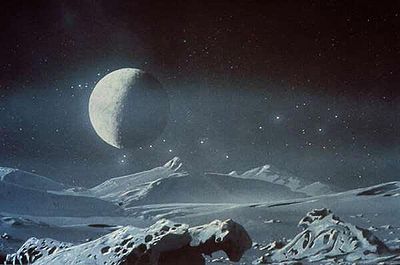 Charon and Pluto revolve about each other every 6.387 days. The two objects are gravitationally locked
Tidal locking
Tidal locking occurs when the gravitational gradient makes one side of an astronomical body always face another; for example, the same side of the Earth's Moon always faces the Earth. A tidally locked body takes just as long to rotate around its own axis as it does to revolve around its partner...
, so each keeps the same face towards the other. The average distance between Charon and Pluto is 19570 kilometres (12,160.3 mi). The discovery of Charon allowed astronomers to accurately calculate the mass of the Plutonian system, and mutual occultation
Occultation
An occultation is an event that occurs when one object is hidden by another object that passes between it and the observer. The word is used in astronomy . It can also refer to any situation wherein an object in the foreground blocks from view an object in the background...
s revealed their sizes. However, neither indicated the two bodies' individual masses, which could only be estimated, until the discovery of Pluto's outer moons in late 2005. Details in the orbits of the outer moons reveal that Charon has approximately 11.65% of the mass of Pluto. This shows it to have a density of 1.65 ± 0.06 g/cm3, suggesting a composition of 55 ± 5% "rock" to 45% ice, whereas Pluto is somewhat denser and about 70% "rock".

Simulation work published in 2005 by Robin Canup suggested that Charon could have been formed by a giant impact
Giant impact hypothesis
The giant impact hypothesis states that the Moon was created out of the debris left over from a collision between the young Earth and a Mars-sized body. The colliding body is sometimes called Theia for the mythical Greek Titan who was the mother of Selene, the goddess of the moon.The giant impact...
around 4.5 billion
1000000000 (number)
1,000,000,000 is the natural number following 999,999,999 and preceding 1,000,000,001.In scientific notation, it is written as 109....
years ago, much like the Earth
Earth
Earth is the third planet from the Sun, and the densest and fifth-largest of the eight planets in the Solar System. It is also the largest of the Solar System's four terrestrial planets...
and Moon
Moon
The Moon is Earth's only known natural satellite,There are a number of near-Earth asteroids including 3753 Cruithne that are co-orbital with Earth: their orbits bring them close to Earth for periods of time but then alter in the long term . These are quasi-satellites and not true moons. For more...
. In this model a large Kuiper belt
Kuiper belt
The Kuiper belt , sometimes called the Edgeworth–Kuiper belt, is a region of the Solar System beyond the planets extending from the orbit of Neptune to approximately 50 AU from the Sun. It is similar to the asteroid belt, although it is far larger—20 times as wide and 20 to 200 times as massive...
object struck Pluto at high velocity, destroying itself and blasting off much of Pluto's outer mantle
Mantle (geology)
The mantle is a part of a terrestrial planet or other rocky body large enough to have differentiation by density. The interior of the Earth, similar to the other terrestrial planets, is chemically divided into layers. The mantle is a highly viscous layer between the crust and the outer core....
, and Charon coalesced from the debris. However, such an impact should result in an icier Charon and rockier Pluto than scientists have found. It is now thought that Pluto and Charon may have been two bodies that collided before going into orbit about each other. The collision would have been violent enough to boil off volatile ices like methane but not violent enough to have destroyed either body.


Classification as a moon or dwarf planet 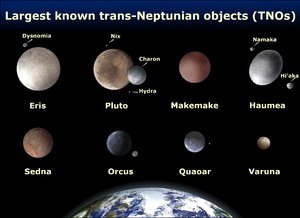 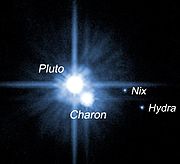 In a draft proposal for the 2006 redefinition of the term, the IAU proposed that a planet be defined as a body that orbits the sun that is large enough for gravitational forces to render the object (nearly) spherical. Under this proposal, Charon would have been classified as a planet, since the draft explicitly defined a planetary satellite as one in which the barycenter lies within the major body. In the final definition, Pluto was reclassified as a dwarf planet
Dwarf planet
A dwarf planet, as defined by the International Astronomical Union , is a celestial body orbiting the Sun that is massive enough to be spherical as a result of its own gravity but has not cleared its neighboring region of planetesimals and is not a satellite...
, but the formal definition of a planetary satellite was not decided upon. Charon is not in the list of dwarf planets currently recognized by the IAU. Had the draft proposal been accepted, even Earth's moon would have been classified as a planet in billions of years when the tidal acceleration
Tidal acceleration
Tidal acceleration is an effect of the tidal forces between an orbiting natural satellite , and the primary planet that it orbits . The "acceleration" is usually negative, as it causes a gradual slowing and recession of a satellite in a prograde orbit away from the primary, and a corresponding...
that is gradually moving the Moon away from the Earth takes the Moon far enough away that the center of mass of the system no longer lies within the Earth.

Charon was originally known by the temporary designation S/1978 P 1, according to the then recently instituted convention. On June 24, 1978, Christy first suggested the name Charon as a scientific-sounding version of his wife Charlene's nickname, "Char." 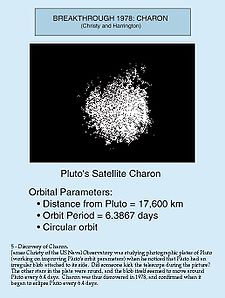 Although colleagues at the Naval Observatory
United States Naval Observatory
The United States Naval Observatory is one of the oldest scientific agencies in the United States, with a primary mission to produce Positioning, Navigation, and Timing for the U.S. Navy and the U.S. Department of Defense...
proposed Persephone
Persephone
In Greek mythology, Persephone , also called Kore , is the daughter of Zeus and the harvest-goddess Demeter, and queen of the underworld; she was abducted by Hades, the god-king of the underworld....
, Christy stuck with Charon after discovering it coincidentally refers to a Greek mythological figure: Charon
Charon (mythology)
In Greek mythology, Charon or Kharon is the ferryman of Hades who carries souls of the newly deceased across the rivers Styx and Acheron that divided the world of the living from the world of the dead. A coin to pay Charon for passage, usually an obolus or danake, was sometimes placed in or on...
is the ferryman of the dead, closely associated in myth with the god Hades, whom the Romans identified with their god Pluto
Pluto (mythology)
In ancient Greek religion and myth, Pluto was a name for the ruler of the underworld; the god was also known as Hades, a name for the underworld itself...
. Official adoption of the name by the IAU
International Astronomical Union
The International Astronomical Union IAU is a collection of professional astronomers, at the Ph.D. level and beyond, active in professional research and education in astronomy...
would wait until late 1985 and was announced on January 3, 1986.

There is minor debate over the preferred pronunciation of the name. The practice of following the classical pronunciation established for the mythological ferryman Charon is used by major English-language dictionaries such as the Merriam-Webster and Oxford English Dictionary. These indicate only one pronunciation of "Charon" when referring specifically to Pluto's moon: with an initial "k" sound. Speakers of languages other than English, and many English-speaking astronomers as well, follow this pronunciation.

However, Christy himself pronounced the ch in the moon's name as sh (IPA [ʃ]), after his wife Charlene. Because of this, as an acknowledgement of Christy and sometimes as an in-joke
In-joke
An in-joke, also known as an inside joke or in joke, is a joke whose humour is clear only to people who are in a particular social group, occupation, or other community of common understanding...
or shibboleth
Shibboleth
A shibboleth is a custom, principle, or belief distinguishing a particular class or group of people, especially a long-standing one regarded as outmoded or no longer important...
, the initial sh pronunciation is common among astronomers when speaking English,
and this is the prescribed pronunciation at NASA and of the New Horizons Pluto mission team.