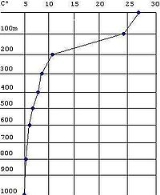 Encyclopedia
A thermocline is a thin but distinct layer in a large body of fluid (e.g. water, such as an ocean or lake, or air, such as an atmosphere), in which temperature changes more rapidly with depth than it does in the layers above or below. In the ocean, the thermocline may be thought of as an invisible blanket which separates the upper mixed layer from the calm deep water below. Depending largely on season, latitude and turbulent mixing by wind, thermoclines may be a semi-permanent feature of the body of water in which they occur, or they may form temporarily in response to phenomena such as the radiative heating/cooling of surface water during the day/night. Factors that affect the depth and thickness of a thermocline include seasonal weather variations, latitude, and local environmental conditions, such as tides and currents. 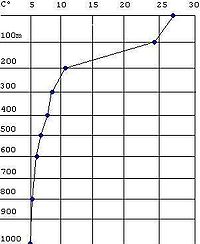 Most of the heat energy of sunlight is absorbed in the first few centimeters at the ocean's surface, which heats up during the day, and cools at night (as heat energy is lost to space by radiation). Waves
WAVES
The WAVES were a World War II-era division of the U.S. Navy that consisted entirely of women. The name of this group is an acronym for "Women Accepted for Volunteer Emergency Service" ; the word "emergency" implied that the acceptance of women was due to the unusual circumstances of the war and...
mix the water near the surface layer and distribute heat to deeper water, such that the temperature may be relatively uniform for up to 100 m (300 ft), depending on wave strength and the existence of surface turbulence caused by currents. Below this mixed layer
Mixed layer
The oceanic or limnological mixed layer is a layer in which active turbulence has homogenized some range of depths. The surface mixed layer is a layer where this turbulence is generated by winds, cooling, or processes such as evaporation or sea ice formation which result in an increase in salinity...
, however, the temperature remains relatively stable over day/night cycles. The temperature of the deep ocean drops gradually with depth. As saline water does not freeze until it reaches −2.3 °C (colder as depth and pressure increase) the temperature well below the surface is usually not far from zero degrees.
The thermocline varies in depth. It is semi-permanent in the tropics, variable in temperate regions (often deepest during the summer), and shallow to nonexistent in the polar regions, where the water column is cold from the surface to the bottom. A layer of sea ice will act as an insulation blanket.

When scuba diving
Scuba diving
Scuba diving is a form of underwater diving in which a diver uses a scuba set to breathe underwater....
, a thermocline where water drops in temperature by a few degrees Celsius quite suddenly can sometimes be observed between two bodies of water, for example where colder upwelling water runs into a surface layer of warmer water. It gives the water an appearance of wrinkled glass that is often used to obscure bathroom windows, and is caused by the altered refractive index
Refraction
Refraction is the change in direction of a wave due to a change in its speed. It is essentially a surface phenomenon . The phenomenon is mainly in governance to the law of conservation of energy. The proper explanation would be that due to change of medium, the phase velocity of the wave is changed...
of the cold or warm water column; these same schlieren
Schlieren
Schlieren are optical inhomogeneities in transparent material not visible to the human eye. Schlieren physics developed out of the need to produce high-quality lenses devoid of these inhomogeneities. These inhomogeneities are localized differences in optical path length that cause light deviation...
can be observed when hot air rises off the tarmac at airports or desert roads and is the cause of mirage
Mirage
A mirage is a naturally occurring optical phenomenon in which light rays are bent to produce a displaced image of distant objects or the sky. The word comes to English via the French mirage, from the Latin mirare, meaning "to look at, to wonder at"...
s.

Thermoclines can also be observed in lakes. In colder climates, this leads to a phenomenon called stratification. During the summer, warm water, which is less dense, will sit on top of colder, denser deeper water, with a thermocline separating them. The warm layer is called the epilimnion
Epilimnion
The epilimnion is the top-most layer in a thermally stratified lake, occurring above the deeper hypolimnion. It is warmer and typically has a higher pH, but lower dissolved oxygen concentration than the hypolimnion....
and the cold layer is called the hypolimnion
Hypolimnion
The hypolimnion is the dense, bottom layer of water in a thermally-stratified lake. It is the layer that lies below the thermocline.Typically the hypolimnion is the coldest layer of a lake in summer, and the warmest layer during winter...
. Because the warm water is exposed to the sun during the day, a stable system exists, and very little mixing of warm water and cold water occurs, particularly in calm weather.

One result of this stability is that as the summer wears on, there is less and less oxygen below the thermocline, as the water below the thermocline never circulates to the surface, and organisms in the water deplete the available oxygen. As winter approaches, the temperature of the surface water will drop as nighttime cooling dominates heat transfer. A point is reached where the density of the cooling surface water becomes greater than the density of the deep water, and overturning begins as the dense surface water moves down under the influence of gravity. This process is aided by wind or any other process (currents for example) that agitates the water. This effect also occurs in Arctic and Antarctic waters, bringing water to the surface which, although low in oxygen, is higher in nutrients than the original surface water. This enriching of surface nutrients may produce blooms
Algal bloom
An algal bloom is a rapid increase or accumulation in the population of algae in an aquatic system. Algal blooms may occur in freshwater as well as marine environments. Typically, only one or a small number of phytoplankton species are involved, and some blooms may be recognized by discoloration...
of phytoplankton
Phytoplankton
Phytoplankton are the autotrophic component of the plankton community. The name comes from the Greek words φυτόν , meaning "plant", and πλαγκτός , meaning "wanderer" or "drifter". Most phytoplankton are too small to be individually seen with the unaided eye...
, making these areas productive.

As the temperature continues to drop, the water on the surface may get cold enough to freeze and the lake/ocean begins to ice over. A new thermocline develops where the densest water (4 °C) sinks to the bottom, and the less dense water (water that is approaching the freezing point) rises to the top. Once this new stratification establishes itself, it lasts until the water warms enough for the 'spring turnover,' which occurs after the ice melts and the surface water temperature rises to 4 °C. During this transition, a thermal bar
Thermal bar
A thermal bar is a hydrodynamic feature that forms around the edges of holomictic lakes during the seasonal transition to stratified conditions, due to the shorter amount of time required for shallow areas of the lake to stratify.- Description :...
may develop.

Waves can occur on the thermocline, causing the depth of the thermocline as measured at a single location to oscillate (usually as a form of seiche
Seiche
A seiche is a standing wave in an enclosed or partially enclosed body of water. Seiches and seiche-related phenomena have been observed on lakes, reservoirs, swimming pools, bays, harbors and seas...
). Alternately the waves may be induced by flow over a raised bottom, producing a thermocline wave which does not change with time, but varies in depth as one moves into or against the flow.

The lower atmosphere also typically contains a boundary between two distinct regions (the troposphere
Troposphere
The troposphere is the lowest portion of Earth's atmosphere. It contains approximately 80% of the atmosphere's mass and 99% of its water vapor and aerosols....
and stratosphere
Stratosphere
The stratosphere is the second major layer of Earth's atmosphere, just above the troposphere, and below the mesosphere. It is stratified in temperature, with warmer layers higher up and cooler layers farther down. This is in contrast to the troposphere near the Earth's surface, which is cooler...
), but that boundary (the tropopause
Tropopause
The tropopause is the atmospheric boundary between the troposphere and the stratosphere.-Definition:Going upward from the surface, it is the point where air ceases to cool with height, and becomes almost completely dry...
) displays quite different behavior. However atmospheric thermoclines, or inversions
Inversion (meteorology)
In meteorology, an inversion is a deviation from the normal change of an atmospheric property with altitude. It almost always refers to a temperature inversion, i.e...
, can occur, e.g. as nighttime cooling of the Earth's surface produces cold, dense, often calm air adjacent to the ground. The coldest air is next to the ground, with air temperature increasing with height. At the top of this nighttime boundary layer (which may be only a hundred meters) the normal adiabatic temperature profile of the troposphere (i.e. temperature decreasing with altitude) is again observed. The thermocline or inversion layer occurs where the temperature profile changes from positive to negative with increasing height. The stability of the night time inversion is usually destroyed soon after sunrise, as the sun's energy warms the ground, which warms the air in the inversion layer. The warmer, less dense, air then rises, destroying the stability that characterizes the nightly inversion.