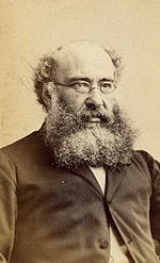 Noted fans have included Sir Alec Guinness
Alec Guinness
Sir Alec Guinness, CH, CBE was an English actor. He was featured in several of the Ealing Comedies, including Kind Hearts and Coronets in which he played eight different characters. He later won the Academy Award for Best Actor for his role as Colonel Nicholson in The Bridge on the River Kwai...
(who never travelled without a Trollope novel), former British Prime Ministers Harold Macmillan
Harold Macmillan
Maurice Harold Macmillan, 1st Earl of Stockton, OM, PC was Conservative Prime Minister of the United Kingdom from 10 January 1957 to 18 October 1963....
and Sir John Major
John Major
Sir John Major, is a British Conservative politician, who served as Prime Minister of the United Kingdom and Leader of the Conservative Party from 1990–1997...
, economist John Kenneth Galbraith
John Kenneth Galbraith
John Kenneth "Ken" Galbraith , OC was a Canadian-American economist. He was a Keynesian and an institutionalist, a leading proponent of 20th-century American liberalism...
, English judge Lord Denning, American novelists Sue Grafton
Sue Grafton
Sue Taylor Grafton is a contemporary American author of detective novels. She is best known as the author of the 'alphabet series' featuring private investigator Kinsey Millhone in the fictional city of Santa Teresa, California. The daughter of detective novelist C. W...
and Dominick Dunne
Dominick Dunne
Dominick John Dunne was an American writer and investigative journalist, whose subjects frequently hinged on the ways in which high society interacts with the judicial system...
and soap opera writer Harding Lemay
Harding Lemay
Harding Lemay is an American screenwriter and playwright. Born near the Mohawk Indian reservation, where his mother grew up, he ran away to New York City at age 17, where he has lived ever since.-Career:...
.

Men who cannot believe in the mystery of our Saviour's redemption can believe that spirits from the dead have visited them in a stranger's parlour, because they see a table shake and do not know how it is shaken; because they hear a rapping on a board, and cannot see the instrument that raps it; because they are touched in the dark, and do not know the hand that touches them.

No man thinks there is much ado about nothing when the ado is about himself.

It would seem that the full meaning of the word marriage can never be known by those who, at their first outspring into life, are surrounded by all that money can give. It requires the single sitting-room, the single fire, the necessary little efforts of self-devotion, the inward declaration that some struggle shall be made for that other one.

Marvellous is the power which can be exercised, almost unconsciously, over a company, or an individual, or even upon a crowd by one person gifted with good temper, good digestion, good intellects, and good looks.

The affair simply amounted to this, that they were to eat their dinner uncomfortably in a field instead of comfortably in the dining room.

The good and the bad mix themselves so thoroughly in our thoughts, even in our aspirations, that we must look for excellence rather in overcoming evil than in freeing ourselves from its influence.

It was admitted by all her friends, and also by her enemies— who were in truth the more numerous and active body of the two— that Lizzie Greystock had done very well with herself.