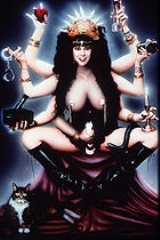 Encyclopedia
Annie M. Sprinkle is an American former prostitute
Prostitution
Prostitution is the act or practice of providing sexual services to another person in return for payment. The person who receives payment for sexual services is called a prostitute and the person who receives such services is known by a multitude of terms, including a "john". Prostitution is one of...
, stripper
Striptease
A striptease is an erotic or exotic dance in which the performer gradually undresses, either partly or completely, in a seductive and sexually suggestive manner...
, pornographic actress, cable television
Cable television
Cable television is a system of providing television programs to consumers via radio frequency signals transmitted to televisions through coaxial cables or digital light pulses through fixed optical fibers located on the subscriber's property, much like the over-the-air method used in traditional...
host, porn magazine
Pornographic magazine
Pornographic magazines, sometimes known as adult magazines, sex magazines or top-shelf magazines are pornographic magazines that contain content of a sexual nature. Adult magazines are mainly aimed towards men, and in some parts of the world, many men's first sight of a naked woman has been in an...
editor
Editing
Editing is the process of selecting and preparing written, visual, audible, and film media used to convey information through the processes of correction, condensation, organization, and other modifications performed with an intention of producing a correct, consistent, accurate, and complete...
, writer
Writer
A writer is a person who produces literature, such as novels, short stories, plays, screenplays, poetry, or other literary art. Skilled writers are able to use language to portray ideas and images....
and sex
Sex
In biology, sex is a process of combining and mixing genetic traits, often resulting in the specialization of organisms into a male or female variety . Sexual reproduction involves combining specialized cells to form offspring that inherit traits from both parents...
film producer
Film producer
A film producer oversees and delivers a film project to all relevant parties while preserving the integrity, voice and vision of the film. They will also often take on some financial risk by using their own money, especially during the pre-production period, before a film is fully financed.The...
. She received a BFA in photography from the School of Visual Arts
School of Visual Arts
The School of Visual Arts , is a proprietary art school located in Manhattan, New York City, and is widely considered to be one of the leading art schools in the United States. It was established in 1947 by co-founders Silas H. Rhodes and Burne Hogarth as the Cartoonists and Illustrators School and...
in 1986 and earned a degree in human sexuality from the Institute for Advanced Study of Human Sexuality
Institute for Advanced Study of Human Sexuality
The Institute for Advanced Study of Human Sexuality is a non-accredited degree-granting institution and resource center in the field of sexology located in San Francisco, California. Degree and certificate programs focus on public health, sex therapy, and sexological research...
in San Francisco in 1992. Currently, Dr. Sprinkle works as a performance artist and sex educator
Sex education
Sex education refers to formal programs of instruction on a wide range of issues relating to human sexuality, including human sexual anatomy, sexual reproduction, sexual intercourse, reproductive health, emotional relations, reproductive rights and responsibilities, abstinence, contraception, and...
. Sprinkle, who is bisexual, married her long-time partner, Beth Stephens, in Canada
Same-sex marriage in Canada
On July 20, 2005, Canada became the fourth country in the world and the first country in the Americas to legalize same-sex marriage nationwide with the enactment of the Civil Marriage Act which provided a gender-neutral marriage definition...
on January 14, 2007.

In 1991, Sprinkle created the Sluts and Goddesses workshop, which became the basis for her 1992 production The Sluts and Goddesses Video Workshop – Or How To Be A Sex Goddess in 101 Easy Steps, which was co-produced and co-directed with videographer Maria Beatty
Maria Beatty
Maria Beatty is a New York filmmaker who directs, acts, and produces. Her films are often made in black and white and cover various aspects of female sexuality including BDSM and fetishism...
, and featured music by composer Pauline Oliveros
Pauline Oliveros
Pauline Oliveros is an American accordionist and composer who is a central figure in the development of post-war electronic art music....
.

She later starred in Nick Zedd
Nick Zedd
Nick Zedd is an American filmmaker and author based in New York City. He coined the term Cinema of Transgression in 1985 to describe a loose-knit group of like-minded filmmakers and artists using shock value and black humor in their work...
's experimental films War Is Menstrual Envy (1992), Ecstasy In Entropy (1999), and Electra Elf: The Beginning (2005).

She has appeared in over 200 films, including hard and softcore pornography, B movie
B movie
A B movie is a low-budget commercial motion picture that is not definitively an arthouse or pornographic film. In its original usage, during the Golden Age of Hollywood, the term more precisely identified a film intended for distribution as the less-publicized, bottom half of a double feature....
s, loops, numerous documentaries, and four HBO Real Sex
Real Sex
Real Sex is a television series broadcast on and a production of HBO. As its name implies, Real Sex is a sexually explicit "magazine" which "explores sex '90s style."...
programs. She has produced, directed, and starred in several of her own films, such as Annie Sprinkle's Herstory of Porn. Her work in these films has earned her a spot on the Adult Star Path of Fame in Edison, New Jersey
Edison, New Jersey
Edison Township is a township in Middlesex County, New Jersey. What is now Edison Township was originally incorporated as Raritan Township by an Act of the New Jersey Legislature on March 17, 1870, from portions of both Piscataway Township and Woodbridge Township...
.

Sprinkle's work has always been about sexuality, with a political, spiritual, and artistic bent. In December 2005, she committed to doing seven years of art projects about love with her wife and art collaborator, Beth Stephens. They call this their Love Art Laboratory. Part of their project is to do an experimental art wedding each year, and each year has a different theme and color. The seven-year theme was adapted to their project by invitation of artist Linda M. Montano
Linda Montano
Linda Mary Montano is a central figure in contemporary performance art. She was raised in a devoutly Roman Catholic household, partly Irish and partly Italian, that was surrounded by artistic activity...
.

Sprinkle and Stephens have been exploring their ecosexuality since they married the Earth and took it as their lover in a ceremony presided over by Guillermo Gómez-Peña
Guillermo Gómez-Peña
Guillermo Gómez-Peña was born in Mexico City and moved to the US in 1978, where he established himself as a performance artist, writer, activist, and educator. He has pioneered multiple media, including performance art, experimental radio, video, performance photography and installation art...
on May 2008 in Santa Cruz. They also created a new field of research they coined Sexecology—which explores the places where sexology and ecology intersect. They co-created an experimental theater piece, Dirty Sexecology—25 Ways to Make Love to the Earth.

Steinberg first gave herself the name "Annie" when she started working in pornography. As her career continued she had an epiphany one night and she says "as if from the goddess herself" the name Annie Sprinkle came to her. She thought the name appropriate because "I was attracted by the sprinkles over ice cones (I am a bit of a sugaraholic!) and by the sound of humidity. I like cascades, urine, vaginal fluid, sweat, anything wet. So the name "Annie Sprinkle" seemed perfect.