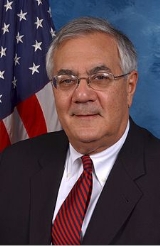 Overview
Barney Frank is the U.S. Representative
United States House of Representatives
The United States House of Representatives is one of the two Houses of the United States Congress, the bicameral legislature which also includes the Senate.The composition and powers of the House are established in Article One of the Constitution...
for (1981–present). A member of the Democratic Party
Democratic Party (United States)
The Democratic Party is one of two major contemporary political parties in the United States, along with the Republican Party. The party's socially liberal and progressive platform is largely considered center-left in the U.S. political spectrum. The party has the lengthiest record of continuous...
, he is the former chairman of the House Financial Services Committee (2007–2011) and is considered the most prominent gay
Gay
Gay is a word that refers to a homosexual person, especially a homosexual male. For homosexual women the specific term is "lesbian"....
politician in the United States.

I'm used to being in the minority. I'm a left-handed gay Jew. I've never felt, automatically, a member of any majority.

Interview with Claudia Dreifus in September and October 1995, published in Times Magazine (4 February 1996)

Moderate Republicans are reverse Harry Houdini|Houdinis. They tie themselves up in knots and then tell you they can't do anything because they're tied up in knots.

… [they] believe that life begins at conception and ends at birth…

There are a lot of ways to mispronounce my name. That is the least common […] I checked with my mother. In 50 years no one's ever called her "Elsie Fag".