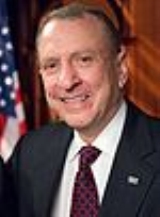 Specter was born in Wichita, Kansas
Wichita, Kansas
Wichita is the largest city in the U.S. state of Kansas.As of the 2010 census, the city population was 382,368. Located in south-central Kansas on the Arkansas River, Wichita is the county seat of Sedgwick County and the principal city of the Wichita metropolitan area...
to a Russian immigrant father and graduated from the University of Pennsylvania
University of Pennsylvania
The University of Pennsylvania is a private, Ivy League university located in Philadelphia, Pennsylvania, United States. Penn is the fourth-oldest institution of higher education in the United States,Penn is the fourth-oldest using the founding dates claimed by each institution...
. He later served with the United States Air Force
United States Air Force
The United States Air Force is the aerial warfare service branch of the United States Armed Forces and one of the American uniformed services. Initially part of the United States Army, the USAF was formed as a separate branch of the military on September 18, 1947 under the National Security Act of...
during the Korean War
Korean War
The Korean War was a conventional war between South Korea, supported by the United Nations, and North Korea, supported by the People's Republic of China , with military material aid from the Soviet Union...
, graduated from Yale Law School
Yale Law School
Yale Law School, or YLS, is the law school of Yale University in New Haven, Connecticut, United States. Established in 1824, it offers the J.D., LL.M., J.S.D. and M.S.L. degrees in law. It also hosts visiting scholars, visiting researchers and a number of legal research centers...
, and opened a law firm with Marvin Katz
Marvin Katz
Marvin Katz was a United States federal judge.Born in Philadelphia, Pennsylvania, Katz received a B.A. from the University of Pennsylvania in 1951 and an LL.B. from Yale Law School in 1954. He was in private practice in Philadelphia from 1954 to 1977, serving as a law clerk for Judge Francis X...
, who would later become a federal judge.

I would suggest respectfully to the president that he is not the sole decider. The decider is a shared and joint responsibility.