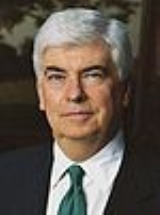 Overview
Christopher John "Chris" Dodd (born May 27, 1944) is an American
United States
The United States of America is a federal constitutional republic comprising fifty states and a federal district...
lawyer
Lawyer
A lawyer, according to Black's Law Dictionary, is "a person learned in the law; as an attorney, counsel or solicitor; a person who is practicing law." Law is the system of rules of conduct established by the sovereign government of a society to correct wrongs, maintain the stability of political...
, lobbyist, and Democratic Party
Democratic Party (United States)
The Democratic Party is one of two major contemporary political parties in the United States, along with the Republican Party. The party's socially liberal and progressive platform is largely considered center-left in the U.S. political spectrum. The party has the lengthiest record of continuous...
politician
Politician
A politician, political leader, or political figure is an individual who is involved in influencing public policy and decision making...
who served as a United States Senator from Connecticut
Connecticut
Connecticut is a state in the New England region of the northeastern United States. It is bordered by Rhode Island to the east, Massachusetts to the north, and the state of New York to the west and the south .Connecticut is named for the Connecticut River, the major U.S. river that approximately...
for a thirty-year period ending with the 111th United States Congress
111th United States Congress
The One Hundred Eleventh United States Congress was the meeting of the legislative branch of the United States federal government from January 3, 2009 until January 3, 2011. It began during the last two weeks of the George W. Bush administration, with the remainder spanning the first two years of...
.

Dodd is a Connecticut native and a graduate of Georgetown Preparatory School
Georgetown Preparatory School
Georgetown Preparatory School is an American Jesuit college preparatory school for grades 9 through 12. It is the oldest all boys school in the United States, and the only Jesuit boarding school in the country...
in Bethesda, Maryland
Bethesda, Maryland
Bethesda is a census designated place in southern Montgomery County, Maryland, United States, just northwest of Washington, D.C. It takes its name from a local church, the Bethesda Meeting House , which in turn took its name from Jerusalem's Pool of Bethesda...
, and Providence College
Providence College
Providence College is a private, coeducational, Catholic university located about two miles west of downtown Providence, Rhode Island, United States, the state's capital city. With a 2010–2011 enrollment of 3,850 undergraduate students and 735 graduate students, the College specializes in academic...
. His father, Thomas J. Dodd
Thomas J. Dodd
Thomas Joseph Dodd was a United States Senator and Representative from Connecticut, He was the first Senator censured by the US Senate since Joseph McCarthy in 1954, and was one of only six people censured by the Senate in the 20th century. He is the father of former U.S. Senator Christopher Dodd...
, was one of Connecticut's United States Senators from 1959-1971. Chris Dodd served in the Peace Corps
Peace Corps
The Peace Corps is an American volunteer program run by the United States Government, as well as a government agency of the same name. The mission of the Peace Corps includes three goals: providing technical assistance, helping people outside the United States to understand US culture, and helping...
for two years prior to entering law school at the University of Louisville, and during law school concurrently served in the United States Army Reserve.

Anyone else getting" hosed" by countrywide home loans trying to get a short sale??
More
x