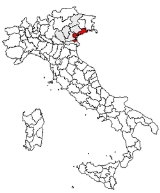 Encyclopedia
Altinum is the name of an ancient coastal town of the Veneti
Adriatic Veneti
The Veneti were an ancient people who inhabited north-eastern Italy, in an area corresponding to the modern-day region of the Veneto....
15 km SE of the modern Treviso
Treviso
Treviso is a city and comune in Veneto, northern Italy. It is the capital of the province of Treviso and the municipality has 82,854 inhabitants : some 3,000 live within the Venetian walls or in the historical and monumental center, some 80,000 live in the urban center proper, while the city...
, northern Italy, on the edge of the lagoons. Located on the eastern coast of that nation, at the mouth of the river Silis, it was first destroyed by Attila in 452 and gradually abandoned by its inhabitants, who sought refuge in the islands of the lagoon, such as Torcello
Torcello
Torcello is a quiet and sparsely populated island at the northern end of the Venetian Lagoon. It is considered the oldest continuously populated region of Venice, and once held the largest population of the Republic of Venice.-History:...
and Burano
Burano
Burano is an island in the Venetian Lagoon, northern Italy; like Venice itself, it could more correctly be called an archipelago of four islands linked by bridges...
, in the area where later Venice
Venice
Venice is a city in northern Italy which is renowned for the beauty of its setting, its architecture and its artworks. It is the capital of the Veneto region...
would be built.

Altino has today some 100 inhabitants and a historical museum.

Finds of a necropolis and Venetic funeral inscriptions show that it was a center as early as the fifth century BC, although there are traces of human presence in the area dating to as early as the 6th millennium BC.

It increased in importance with the Romanization of the region and, to be specific, with the construction of the Via Annia
Via Annia
The Via Annia was the consular Roman road through Cisalpine Gaul which linked Atria to Aquileia, passing through Patavium , then, skirting the barely-inhabited lagoon, through Altinum and Iulia Concordia...
(131 BC), which passed through, linking Atria
Atria
Atria may refer to:*Atrium , an anatomical structure of the heart*Atrium , a large open space within a building*Atria or Alpha Trianguli Australis, a star in the constellation Triangulum Australe...
with Aquileia
Aquileia
Aquileia is an ancient Roman city in what is now Italy, at the head of the Adriatic at the edge of the lagoons, about 10 km from the sea, on the river Natiso , the course of which has changed somewhat since Roman times...
. At the end of the Republic, Altinum became a municipium
Municipium
Municipium , the prototype of English municipality, was the Latin term for a town or city. Etymologically the municipium was a social contract between municipes, the "duty holders," or citizens of the town. The duties, or munera, were a communal obligation assumed by the municipes in exchange for...
, whose citizens were ascribed to the Roman tribe Scaptia. Augustus
Augustus
Augustus ;23 September 63 BC – 19 August AD 14) is considered the first emperor of the Roman Empire, which he ruled alone from 27 BC until his death in 14 AD.The dates of his rule are contemporary dates; Augustus lived under two calendars, the Roman Republican until 45 BC, and the Julian...
and his successors brought it into further importance with the construction of the Via Claudia Augusta
Via Claudia Augusta
The Via Claudia Augusta is an ancient Roman road, which linked the valley of the Po River with Rhaetia across the Alps. Since 2007, the Giontech Archeological Site, in Mezzocorona/Kronmetz serves as the Via Claudia Augusta International Research Center, directed by Prof...
, which began at Altino and reached the "limes
Limes
A limes was a border defense or delimiting system of Ancient Rome. It marked the boundaries of the Roman Empire.The Latin noun limes had a number of different meanings: a path or balk delimiting fields, a boundary line or marker, any road or path, any channel, such as a stream channel, or any...
" of the northeast at the Danube
Danube
The Danube is a river in the Central Europe and the Europe's second longest river after the Volga. It is classified as an international waterway....
, a distance of 350 m, by way of the Lake of Constance. The place, thus, became of considerable strategic and commercial importance, and the comparatively mild climate (considering its northerly situation) led to the erection of villas that Martial
Martial
Marcus Valerius Martialis , was a Latin poet from Hispania best known for his twelve books of Epigrams, published in Rome between AD 86 and 103, during the reigns of the emperors Domitian, Nerva and Trajan...
compares with those of Baiae
Baiae
Baiae , a frazione of the comune of Bacoli) in the Campania region of Italy was a Roman seaside resort on the Bay of Naples. It was said to have been named after Baius, who was supposedly buried there. Baiae was for several hundred years a fashionable resort, especially towards the end of the Roman...
. Strabo
Strabo
Strabo, also written Strabon was a Greek historian, geographer and philosopher.-Life:Strabo was born to an affluent family from Amaseia in Pontus , a city which he said was situated the approximate equivalent of 75 km from the Black Sea...
wrote that "Altinum too is in a marsh, for the portion it occupies is similar to that of Ravenna
Ravenna
Ravenna is the capital city of the Province of Ravenna in the Emilia-Romagna region of Italy and the second largest comune in Italy by land area, although, at , it is little more than half the size of the largest comune, Rome...
", a waterlogged city whose canals were flushed by the tides: "These cities, then, are for the most part surrounded by the marshes, and hence subject to inundations.".

Lucius Verus
Lucius Verus
Lucius Verus , was Roman co-emperor with Marcus Aurelius, from 161 until his death.-Early life and career:Lucius Verus was the first born son to Avidia Plautia and Lucius Aelius Verus Caesar, the first adopted son and heir of Roman Emperor Hadrian . He was born and raised in Rome...
died there in 169
169
Year 169 was a common year starting on Saturday of the Julian calendar. At the time, it was known as the Year of the Consulship of Senecio and Apollinaris...
AD.

Altinum became the seat of a bishopric
Diocese
A diocese is the district or see under the supervision of a bishop. It is divided into parishes.An archdiocese is more significant than a diocese. An archdiocese is presided over by an archbishop whose see may have or had importance due to size or historical significance...
by at least the 5th century AD, the first bishop being Heliodorus of Altino
Heliodorus of Altino
Saint Heliodorus was the first bishop of Altinum in the 4th century. He was born at Dalmatia. Like Chromatius, he was a disciple of Valerianus, the bishop of Aquileia....
.

Around 452
452
Year 452 was a leap year starting on Tuesday of the Julian calendar. At the time, it was known as the Year of the Consulship of Herculanus and Sporacius...
, Attila the Hun
Attila the Hun
Attila , more frequently referred to as Attila the Hun, was the ruler of the Huns from 434 until his death in 453. He was leader of the Hunnic Empire, which stretched from the Ural River to the Rhine River and from the Danube River to the Baltic Sea. During his reign he was one of the most feared...
captured the city and burned most of it, along with several other nearby cities. Refugees settled on the islands of the lagoons, forming settlements that eventually became known as Venice. In 568 it was conquered by the Lombards
Lombards
The Lombards , also referred to as Longobards, were a Germanic tribe of Scandinavian origin, who from 568 to 774 ruled a Kingdom in Italy...
, whose domination spurred further emigration towards the Venetian Lagoon
Venetian Lagoon
The Venetian Lagoon is the enclosed bay of the Adriatic Sea in which the city of Venice is situated. Its name in the Venetian language, Laguna Veneta— cognate of Latin lacus, "lake"— has provided the international name for an enclosed, shallow embayment of saltwater, a lagoon.The Venetian Lagoon...
. The Catholic diocese was moved to Torcello
Torcello
Torcello is a quiet and sparsely populated island at the northern end of the Venetian Lagoon. It is considered the oldest continuously populated region of Venice, and once held the largest population of the Republic of Venice.-History:...
in 647. In the 10th-11th centuries, the area of Altinum was totally abandoned; a new settlement appeared in the 15th century, which was to become the nearby Quarto d'Altino. The current frazione of the latter was founded in the 19th century.


Reappraisal of the city layout

The memory of the location the city had never been completely forgotten, especially among locals, thanks to the sporadic recovery of finds and given its use as a quarry of building materials for the new-born Torcello, Venice and other built-up areas of the Lagoon of Venice. However, the material remains eventually sunk into the mud of the marshy area, and were no longer visible. Historical and archaeological studies started to develop mainly after the drain of the swamp at the beginning of the 20th century. The area was subject to archaeological excavations and surface and aerial surveys, which located some of the buildings of the city: part of the defensive wall circuit, a gate, private houses, part of a dock area, stretches of the public roads leading to the city. During 2008-9 the area has been newly examined with a combination of visible and near-infrared photos taken during a drought in 2007, when cropmark
Cropmark
Cropmarks or Crop marks are a means through which sub-surface archaeological, natural and recent features may be visible from the air or a vantage point on higher ground or a temporary platform...
s in maize and soybean fields revealed the presence of brickwork and foundations beneath the plow zone. The traditional Roman grid plan, here with a canal that cut through the city, and the recognizable outlines of theaters and other public structures enabled Andrea Ninfo and colleagues from Padua University to make a detailed reconstruction of the city's topography and the network of canals and sluices that drained the marshy environment. See the overlaid Altinum city map for Google Earth for better localization.