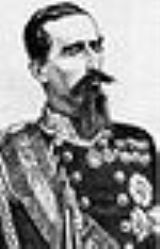 Encyclopedia
Alfonso Ferrero, Cavaliere La Màrmora (November 18, 1804 – January 5, 1878) was an Italian
Italian people
The Italian people are an ethnic group that share a common Italian culture, ancestry and speak the Italian language as a mother tongue. Within Italy, Italians are defined by citizenship, regardless of ancestry or country of residence , and are distinguished from people...
general
Italian Army
The Italian Army is the ground defence force of the Italian Armed Forces. It is all-volunteer force of active-duty personnel, numbering 108,355 in 2010. Its best-known combat vehicles are the Dardo infantry fighting vehicle, the Centauro tank destroyer and the Ariete tank, and among its aircraft...
and statesman
Statesman
A statesman is usually a politician or other notable public figure who has had a long and respected career in politics or government at the national and international level. As a term of respect, it is usually left to supporters or commentators to use the term...
. His brother Alessandro La Marmora founded the branch of the Italian army now called the Bersaglieri
Bersaglieri
The Bersaglieri are a corps of the Italian Army originally created by General Alessandro La Marmora on 18 June 1836 to serve in the Piedmontese Army, later to become the Royal Italian Army...
.

Born in Turin
Turin
Turin is a city and major business and cultural centre in northern Italy, capital of the Piedmont region, located mainly on the left bank of the Po River and surrounded by the Alpine arch. The population of the city proper is 909,193 while the population of the urban area is estimated by Eurostat...
, he entered the Sardinia
Kingdom of Sardinia
The Kingdom of Sardinia consisted of the island of Sardinia first as a part of the Crown of Aragon and subsequently the Spanish Empire , and second as a part of the composite state of the House of Savoy . Its capital was originally Cagliari, in the south of the island, and later Turin, on the...
n army in 1823, and was a captain in March 1848, when he gained distinction and the rank of major at the siege of Peschiera. On August 5, 1848 he liberated Charles Albert of Sardinia
Charles Albert of Sardinia
Charles Albert was the King of Piedmont-Sardinia from 1831 to 1849. He succeeded his distant cousin Charles Felix, and his name is bound with the first Italian statute and the First War of Independence...
, from a revolutionary mob in Milan
Milan
Milan is the second-largest city in Italy and the capital city of the region of Lombardy and of the province of Milan. The city proper has a population of about 1.3 million, while its urban area, roughly coinciding with its administrative province and the bordering Province of Monza and Brianza ,...
, and in October was promoted general and appointed Minister of War. After suppressing the revolt of Genoa
Genoa
Genoa |Ligurian]] Zena ; Latin and, archaically, English Genua) is a city and an important seaport in northern Italy, the capital of the Province of Genoa and of the region of Liguria....
in 1849, he again assumed in November 1849 the portfolio of war, which, save during the period of his command of the Crimean expedition
Crimean War
The Crimean War was a conflict fought between the Russian Empire and an alliance of the French Empire, the British Empire, the Ottoman Empire, and the Kingdom of Sardinia. The war was part of a long-running contest between the major European powers for influence over territories of the declining...
, he retained until 1859.

He took part in the war of 1859 against Austria
Austrian Empire
The Austrian Empire was a modern era successor empire, which was centered on what is today's Austria and which officially lasted from 1804 to 1867. It was followed by the Empire of Austria-Hungary, whose proclamation was a diplomatic move that elevated Hungary's status within the Austrian Empire...
; and in July of that year succeeded Cavour in the premiership. In 1860 he was sent to Berlin
Berlin
Berlin is the capital city of Germany and is one of the 16 states of Germany. With a population of 3.45 million people, Berlin is Germany's largest city. It is the second most populous city proper and the seventh most populous urban area in the European Union...
and Saint Petersburg
Saint Petersburg
Saint Petersburg is a city and a federal subject of Russia located on the Neva River at the head of the Gulf of Finland on the Baltic Sea...
to arrange for the recognition of the kingdom of Italy and subsequently he held the offices of governor of Milan and royal lieutenant at Naples
Naples
Naples is a city in Southern Italy, situated on the country's west coast by the Gulf of Naples. Lying between two notable volcanic regions, Mount Vesuvius and the Phlegraean Fields, it is the capital of the region of Campania and of the province of Naples...
, until, in September 1864, he succeeded Marco Minghetti
Marco Minghetti
Marco Minghetti was an Italian economist and statesman.-Biography:Minghetti was born at Bologna, then part of the Papal States....
as premier. In this capacity he modified the scope of the September Convention
September Convention
The September Convention was a treaty, signed on 15 September 1864, between the Italian government and Napoleon III, under which:* Napoleon III agreed to withdraw all French troops from Rome within two years....
by a note in which he claimed for Italy full freedom of action in respect of national aspirations to the possession of Rome
Rome
Rome is the capital of Italy and the country's largest and most populated city and comune, with over 2.7 million residents in . The city is located in the central-western portion of the Italian Peninsula, on the Tiber River within the Lazio region of Italy.Rome's history spans two and a half...
, a document of which Visconti-Venosta
Emilio, marquis Visconti-Venosta
Emilio, marquis Visconti-Venosta was an Italian statesman.-Biography :Visconti-Venosta was born at Milan...
afterwards took advantage when justifying the Italian occupation of Rome in 1870.

In April 1866 La Marmora concluded an alliance with Prussia
Prussia
Prussia was a German kingdom and historic state originating out of the Duchy of Prussia and the Margraviate of Brandenburg. For centuries, the House of Hohenzollern ruled Prussia, successfully expanding its size by way of an unusually well-organized and effective army. Prussia shaped the history...
against Austria-Hungary
Austria-Hungary
Austria-Hungary , more formally known as the Kingdoms and Lands Represented in the Imperial Council and the Lands of the Holy Hungarian Crown of Saint Stephen, was a constitutional monarchic union between the crowns of the Austrian Empire and the Kingdom of Hungary in...
, and, on the outbreak of the Third Italian War of Independence
Third Italian War of Independence
The Third Italian War of Independence was a conflict which paralleled the Austro-Prussian War, and was fought between the Kingdom of Italy and the Austrian Empire.-Background:...
in June, took command of an army corps. He is largely credited of the hesitant conduct of the first phases of the Italian invasion, which, despite the large Italian superiority, led to the defeat in the battle of Custoza
Battle of Custoza (1866)
The Battle of Custoza took place on June 24, 1866 during the Third Italian Independence War in the Italian unification process.The Austrian Imperial army with the old Venetian Army, led by Archduke Albert of Habsburg, defeated the Italian army led by Alfonso Ferrero la Marmora and Enrico Cialdini,...
on June 23. Accused of treason
Treason
In law, treason is the crime that covers some of the more extreme acts against one's sovereign or nation. Historically, treason also covered the murder of specific social superiors, such as the murder of a husband by his wife. Treason against the king was known as high treason and treason against a...
by his fellow countrymen, in particular by other high rank generals, and of duplicity by the Prussians, he eventually published in defence of his tactics (1873) a series of documents entitled Un po' più di luce sugli eventi dell'anno 1866 ("More light on the events of 1866") a step which caused irritation in Germany
Germany
Germany , officially the Federal Republic of Germany , is a federal parliamentary republic in Europe. The country consists of 16 states while the capital and largest city is Berlin. Germany covers an area of 357,021 km2 and has a largely temperate seasonal climate...
, and exposed him to the charge of having violated state secrets.

Meanwhile he had been sent to Paris
Paris
Paris is the capital and largest city in France, situated on the river Seine, in northern France, at the heart of the Île-de-France region...
in 1867 to oppose the French expedition to Rome, and in 1870, after the occupation of Rome by the Italians, had been appointed lieutenant-royal of the new capital. He died at Florence
Florence
Florence is the capital city of the Italian region of Tuscany and of the province of Florence. It is the most populous city in Tuscany, with approximately 370,000 inhabitants, expanding to over 1.5 million in the metropolitan area....
on January 5, 1878. La Marmora's writings include Un episodio di risorgimento italiano (1875) and Il segreto di stato nel governo costituzionale (1877)