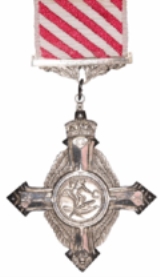 Encyclopedia
The Air Force Cross is a military decoration awarded to personnel of the United Kingdom Armed Forces, and formerly also to officers of the other Commonwealth
Commonwealth of Nations
The Commonwealth of Nations, normally referred to as the Commonwealth and formerly known as the British Commonwealth, is an intergovernmental organisation of fifty-four independent member states...
countries, for "an act or acts of valour, courage or devotion to duty whilst flying, though not in active operations against the enemy". A bar
Medal bar
A medal bar or medal clasp is a thin metal bar attached to the ribbon of a military decoration, civil decoration, or other medal. It is most commonly used to indicate the campaign or operation the recipient received the award for, and multiple bars on the same medal are used to indicate that the...
is added to the ribbon for holders who are awarded a second AFC.

During the First World War, approximately 680 were awarded. During the Second World War, 2,001 medals were awarded, with 26 bars awarded. One unique second bar was awarded to Wing Commander
Wing Commander (rank)
Wing commander is a commissioned rank in the Royal Air Force and the air forces of many other Commonwealth countries...
H. J. Wilson in 1944.

58 honorary awards were made to aircrew from other non-Commonwealth countries.