Encyclopedia
There are nine administrative district
Municipal district
A municipal district is an administrative entity composed of a clearly defined territory and its population and commonly referring to a city, town, or village, or a small grouping of them....
s in the city of Baghdad
Baghdad
Baghdad is the capital of Iraq, as well as the coterminous Baghdad Governorate. The population of Baghdad in 2011 is approximately 7,216,040...
, the capital of Iraq
Iraq
Iraq ; officially the Republic of Iraq is a country in Western Asia spanning most of the northwestern end of the Zagros mountain range, the eastern part of the Syrian Desert and the northern part of the Arabian Desert....
, that correspond to the nine district advisory councils. The Baghdad Security Plan used these nine districts as the nine security districts.
These were formed in 2003 following the invasion of Iraq
2003 invasion of Iraq
The 2003 invasion of Iraq , was the start of the conflict known as the Iraq War, or Operation Iraqi Freedom, in which a combined force of troops from the United States, the United Kingdom, Australia and Poland invaded Iraq and toppled the regime of Saddam Hussein in 21 days of major combat operations...
. District council members are selected from the 89 Neighborhood Advisory Councils in Baghdad.
The number of neighborhood representatives on the district council is based upon the community's population. The Baghdad City Advisory Council consists of 37 members drawn from the district councils and is also based on the district's population.
In the list below, alternate spellings (in parentheses) are from United Nations humanitarian info.org map listing 89 neighborhoods.


Formation of the current system 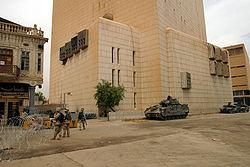 The final step in the establishment of the system of local government for Baghdad Province was the election of the Baghdad Provincial Council
State government
A state government is the government of a subnational entity in a federal form of government, which shares political power with the federal or national government. A state government may have some level of political autonomy, or be subject to the direct control of the federal government...
. As before, the representatives to the Provincial Council were elected by their peers from the lower councils in numbers proportional to the population of the districts they represent. The 41 member Provincial Council took office in February 2004 and served until national elections
Iraqi legislative election, January 2005
Elections for the National Assembly of Iraq were held on January 30, 2005 in Iraq. The 275-member National Assembly was a parliament created under the Transitional Law during the Occupation of Iraq...
held in January 2005, when a new Provincial Council was elected.

This system of 127 separate councils may seem overly cumbersome but Baghdad Province is home to approximately seven million people. At the lowest level, the neighborhood councils, each council represents an average of 74,000 people.