The area was largely uninhabited until the 1950s when Assyrians from Habbaniya
Habbaniya
The Habbaniya, or Habbania, are a Sunni Muslim tribe of the nomadic Bedouin Baggara people in the plains of Sudan's Darfur, North Kurdufan, and South Kurdufan provinces....
started settling down in Baghdad. Most houses and churches were build during the 60s and 70s while the booming neighbourhood attracted more middle class families. Prior to the [Iraq War]] the area was home to the largest concentration of Assyrian Christians and Mandeans as well as mixed Sunni and Shi'ite families.


During the Iraq War

In the early morning of March 19, 2003, Dora became the target of the air assault by U.S. forces during the invasion of Iraq. The attempted assassination of Saddam Hussein
Saddam Hussein
Saddam Hussein Abd al-Majid al-Tikriti was the fifth President of Iraq, serving in this capacity from 16 July 1979 until 9 April 2003...
and his sons Uday
Uday Hussein
Uday Saddam Hussein al-Tikriti , was the eldest son of Saddam Hussein from his first wife, Sajida Talfah. He was the brother of Qusay Hussein. Uday was for several years seen as the heir apparent of his father; however, Uday lost his place in the line of succession due to his erratic behavior and...
and Qusay
Qusay Hussein
Qusay Saddam Hussein al-Tikriti was the second son of Iraqi President Saddam Hussein. He was appointed as his father's heir apparent in 2000.- Family :...
failed, but resulted in the death of one civilian and injuries to fourteen others, including one child. (see Dora Farms strike)

In April 2004 the 1st Battalion, 8th Cavalry Regiment, 1st Cavalry Division operating as motorized infantry was assigned the task of operations in the al-Dora neighborhood. It encountered al-Qaida-affiliated Muslims and fought a pitched battle immediately upon taking over control of this sector from 2-504 PIR, 82nd Airborne Division and 1-94 FA, DIVARTY, 1st Armored Division. The unit sustained four KIA during its ensuing counter insurgency
Counter insurgency
A counter-insurgency or counterinsurgency involves actions taken by the recognized government of a nation to contain or quell an insurgency taken up against it...
operations there, but were able to stop al-Qaida control over the region until its departure in March 2005. In 2009 the Battalion was recently awarded the U.S. Army's Valorous Unit award for its actions in al-Dora. 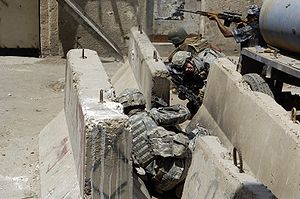 By May 2007, Dora was receiving mainstream media attention as a hornet's nest of sectarian violence, particularly for Islamic anti-Christian violence. Christians were seen as 'soft target
Soft target
Soft target is a military term referring to unarmored/undefended targets needing to be destroyed. For example, a soft target would be an automobile, a house, or assembly of people while a hard target could be a main battle tank or a well defended installation...
s' who would either pay or leave Dora rather than retaliate.

By 2010 Dora has become a predominantly Sunni neighbourhood with Assyrians being reduced to small enclaves. Further attacks in late 2010 forced even more families to flee to more safe areas in- and outside Iraq.
The source of this article is wikipedia, the free encyclopedia.  The text of this article is licensed under the GFDL.