Encyclopedia
Aalst (ˈaːlst) is a city and municipality on the Dender
Dender
The Dendre or Dender is a 65 km long river in Belgium, right tributary of the river Scheldt. The confluence of both rivers is in the Belgian town Dendermonde....
River, 19 miles northwest from Brussels
Brussels
Brussels , officially the Brussels Region or Brussels-Capital Region , is the capital of Belgium and the de facto capital of the European Union...
. It is located in the Flemish
Flemish Region
The Flemish Region is one of the three official regions of the Kingdom of Belgium—alongside the Walloon Region and the Brussels-Capital Region. Colloquially, it is usually simply referred to as Flanders, of which it is the institutional iteration within the context of the Belgian political system...
province
Provinces of Belgium
Belgium is divided into three regions, two of them are subdivided into five provinces each.The division into provinces is fixed by Article 5 of the Belgian Constitution...
of East Flanders
East Flanders
East Flanders is a province of Flanders, one of the three regions of Belgium. It borders on the Netherlands and in Belgium on the provinces of Antwerp, Flemish Brabant , of Hainaut and of West Flanders...
in the Denderstreek
Denderstreek
The Denderstreek or Denderland is a region in the heart of Belgium. It is named after the river Dender. Though the river stretches over three provinces, Hainaut, East Flanders and Flemish Brabant, the region called after the river is situated in East-Flanders. The Dutch word streek means region....
. The municipality comprises the city of Aalst itself and the villages of Baardegem, Erembodegem, Gijzegem, Herdersem, Hofstade, Meldert, Moorsel
Moorsel
Moorsel is a village in the Denderstreek in the province East Flanders in Belgium, a deelgemeente of the city of Aalst. The village belongs to a league of neighboring villages, which call themselves the Faluintjesgemeenten...
, and Nieuwerkerken
Nieuwerkerken
Nieuwerkerken is a municipality located in the Belgian province of Limburg near Hasselt. On January 1, 2006 Nieuwerkerken had a total population of 6,606. The total area is 22.46 km² which gives a population density of 294 inhabitants per km². It consists of 4 villages: Binderveld, Wijer, Kozen and...
. The current mayor of Aalst is Ilse Uyttersprot, from the Christian Democratic and Flemish party. The town has a long-standing feud with Dendermonde
Dendermonde
Dendermonde is a Belgian city and municipality located in the Flemish province of East Flanders in the Denderstreek. The municipality comprises the city of Dendermonde proper and the towns of Appels, Baasrode, Grembergen, Mespelare, Oudegem, Schoonaarde, and Sint-Gillis-bij-Dendermonde...
(situated north along the same river), which dates back from the Middle Ages.

The first historical records on Aalst date from the 9th century, when it was described as the villa
Villa
A villa was originally an ancient Roman upper-class country house. Since its origins in the Roman villa, the idea and function of a villa have evolved considerably. After the fall of the Roman Republic, villas became small farming compounds, which were increasingly fortified in Late Antiquity,...
Alost, a dependency of the Abbey of Lobbes
Lobbes
Lobbes is a Walloon municipality located in the Belgian province of Hainaut. On January 1, 2006, Lobbes had a total population of 5,499. The total area is 32.08 km² which gives a population density of 171 inhabitants per km²....
. During the Middle Ages, a town and port grew at this strategic point, where the road from Bruges
Bruges
Bruges is the capital and largest city of the province of West Flanders in the Flemish Region of Belgium. It is located in the northwest of the country....
to Cologne
Cologne
Cologne is Germany's fourth-largest city , and is the largest city both in the Germany Federal State of North Rhine-Westphalia and within the Rhine-Ruhr Metropolitan Area, one of the major European metropolitan areas with more than ten million inhabitants.Cologne is located on both sides of the...
crossed the Dender
Dender
The Dendre or Dender is a 65 km long river in Belgium, right tributary of the river Scheldt. The confluence of both rivers is in the Belgian town Dendermonde....
. In the 11th century, Aalst was transferred from the pagus
Pagus
In the later Western Roman Empire, following the reorganization of Diocletian, a pagus became the smallest administrative district of a province....
of Brabant
Brabant (landgraviat)
The Landgraviat of Brabant must be distinguished from the Duchy of Brabant. The Duchy of Brabant was initially a feudal elevation of the landgraviat, but its name was applied to the entire country under the control of the Dukes of Brabant, from the 13th century on.This imperial fief was assigned to...
to the County of Flanders
County of Flanders
The County of Flanders was one of the territories constituting the Low Countries. The county existed from 862 to 1795. It was one of the original secular fiefs of France and for centuries was one of the most affluent regions in Europe....
. Its frontier position on the border of the Holy Roman Empire
Holy Roman Empire
The Holy Roman Empire was a realm that existed from 962 to 1806 in Central Europe.It was ruled by the Holy Roman Emperor. Its character changed during the Middle Ages and the Early Modern period, when the power of the emperor gradually weakened in favour of the princes...
allowed the town to keep a certain degree of independence. Its relation with Brabant has been preserved in the city’s white and red coat of arms, the colours of Lotharingia
Lotharingia
Lotharingia was a region in northwest Europe, comprising the Low Countries, the western Rhineland, the lands today on the border between France and Germany, and what is now western Switzerland. It was born of the tripartite division in 855, of the kingdom of Middle Francia, itself formed of the...
.

Construction of the town hall began in the middle of the 12th century, making it the oldest surviving town hall in Belgium. Several manuscripts from this period still survive in the town archives. The town hall, and the city itself, were almost entirely destroyed by fire in 1360. The town was soon rebuilt and a new belfry in gothic
Gothic architecture
Gothic architecture is a style of architecture that flourished during the high and late medieval period. It evolved from Romanesque architecture and was succeeded by Renaissance architecture....
style was built in the 15th century. This was a time of great prosperity for the city, dominated by the powerful weavers'
Weaving
Weaving is a method of fabric production in which two distinct sets of yarns or threads are interlaced at right angles to form a fabric or cloth. The other methods are knitting, lace making and felting. The longitudinal threads are called the warp and the lateral threads are the weft or filling...
guild
Guild
A guild is an association of craftsmen in a particular trade. The earliest types of guild were formed as confraternities of workers. They were organized in a manner something between a trade union, a cartel, and a secret society...
. It is also at that time that Dirk Martens
Dirk Martens
Dirk Martens was a printer and editor in Flanders. He went to Venice and worked with the humanist Gerardus de Lisa. In 1473, he returned to Aalst and together with Johan van Westfalen started a printing press. He printed a book on the two lovers of Enea Piccolomini who later became Pope Pius II...
, a local citizen, became the Southern Netherlands
Southern Netherlands
Southern Netherlands were a part of the Low Countries controlled by Spain , Austria and annexed by France...
’ first printer, founding a printing shop in 1473 that published books by various authors including Christopher Columbus
Christopher Columbus
Christopher Columbus was an explorer, colonizer, and navigator, born in the Republic of Genoa, in northwestern Italy. Under the auspices of the Catholic Monarchs of Spain, he completed four voyages across the Atlantic Ocean that led to general European awareness of the American continents in the...
; Martens would later become a professor at the Catholic University of Louvain.

Aalst suffered considerably under the Eighty Years' War (1568–1648). It was later taken by the French Marshal Turenne in the War of Devolution
War of Devolution
The War of Devolution saw Louis XIV's French armies overrun the Habsburg-controlled Spanish Netherlands and the Franche-Comté, but forced to give most of it back by a Triple Alliance of England, Sweden, and the Dutch Republic in the Treaty of Aix-la-Chapelle.-Background:Louis's claims to the...
of 1667, then occupied by France
France
The French Republic , The French Republic , The French Republic , (commonly known as France , is a unitary semi-presidential republic in Western Europe with several overseas territories and islands located on other continents and in the Indian, Pacific, and Atlantic oceans. Metropolitan France...
until 1706 along with Southern Flanders in general. The textile-based economy flourished under the French. The 19th century was marked by social crises engendered by the Industrial Revolution
Industrial Revolution
The Industrial Revolution was a period from the 18th to the 19th century where major changes in agriculture, manufacturing, mining, transportation, and technology had a profound effect on the social, economic and cultural conditions of the times...
, with Father Adolf Daens
Adolf Daens
Adolf Daens was a Flemish priest from Aalst. Daens was a Jesuit from 1859 to 1871 but is especially known for his socio-political involvement after he joined the diocesan clergy. He created the Daensist movement from which originated in 1893 the Christene Volkspartij inspired by Leo XIII's...
and his Christene Volkspartij
Christene Volkspartij
The Christene Volkspartij was the first Belgian Christian democratic political party. The party was founded in 1891 by the Belgian priest Adolf Daens, who was inspired by the papal encyclical Rerum Novarum of Pope Leo XIII....
emerging as the local defender of workers' rights. The 20th century was marked by occupation by the Germans during both world wars. the cities citizenry are known as the onions, the origin of the name can be found back to medieval times

The textile industry
Textile industry
The textile industry is primarily concerned with the production of yarn, and cloth and the subsequent design or manufacture of clothing and their distribution. The raw material may be natural, or synthetic using products of the chemical industry....
is still vibrant in Aalst, in part because of the French occupation. Aalst produces not only the textiles themselves, but manufactures many of the needed machines. The more rural regions are noted for their production of hops
Hops
Hops are the female flower clusters , of a hop species, Humulus lupulus. They are used primarily as a flavoring and stability agent in beer, to which they impart a bitter, tangy flavor, though hops are also used for various purposes in other beverages and herbal medicine...
, which are sold to the old breweries there. 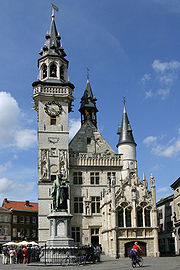 Aalst is famous for its carnival
Carnival
Carnaval is a festive season which occurs immediately before Lent; the main events are usually during February. Carnaval typically involves a public celebration or parade combining some elements of a circus, mask and public street party...
festivities, celebrated every year in February. A Prince Carnaval is elected, who is allowed to "rule" the city for three days. A big parade crosses the city on Sunday, with about 70 groups of costumed volunteers and parade cars. Carnaval Tuesday or Shrove Tuesday (by tradition, the day before Ash Wednesday
Ash Wednesday
Ash Wednesday, in the calendar of Western Christianity, is the first day of Lent and occurs 46 days before Easter. It is a moveable fast, falling on a different date each year because it is dependent on the date of Easter...
), is known as the day of the 'Voil Jeannetten' (literally: "the Dirty Jennies"), i.e., men dressed as women. The festivities traditionally end with the "Burning of the Doll", happening on Tuesday evening.