Encyclopedia
The Aa is an 89 km long river in northern France
France
The French Republic , The French Republic , The French Republic , (commonly known as France , is a unitary semi-presidential republic in Western Europe with several overseas territories and islands located on other continents and in the Indian, Pacific, and Atlantic oceans. Metropolitan France...
. Its source is near the village Bourthes
Bourthes
Bourthes is a commune in the Pas-de-Calais department in the Nord-Pas-de-Calais region of France.-Geography:A village situated some 15 miles southeast of Boulogne-sur-Mer at the D128 and D131 crossroads. The source of the river Aa is found here....
. It flows through the following départements and cities:

The name Aa is old-Dutch and means water.

The river has two characters. From its source to Saint-Omer, it is a small chalk stream
Chalk stream
Chalk streams have characteristics which set them apart from watercourses associated with other rock types.Aside from those with an interest in the geological and ecological disciplines, the term chalk stream is most widely used among a small group of fly fishermen ,...
; a small version of the Somme
Somme River
The Somme is a river in Picardy, northern France. The name Somme comes from a Celtic word meaning tranquility. The department Somme was named after this river....
. From Saint-Omer seawards, it is an artificial navigation with branch canal
Canal
Canals are man-made channels for water. There are two types of canal:#Waterways: navigable transportation canals used for carrying ships and boats shipping goods and conveying people, further subdivided into two kinds:...
s leading towards Calais
Calais
Calais is a town in Northern France in the department of Pas-de-Calais, of which it is a sub-prefecture. Although Calais is by far the largest city in Pas-de-Calais, the department's capital is its third-largest city of Arras....
and Dunkirk and the Canal de Neufossé
Canal de Neufossé
The Canal de Neufossé is a French canal connecting the Aa River in Arques to the Canal d'Aire in Aire-sur-la-Lys. It is a segment of the Canal Dunkerque-Escaut. In 1760, the Neufossé canal was built to link the river Lys to the Aa, and give Lille and other inland towns a French route to the...
heading inland into the French canal system.

Saint-Omer formerly lay at the head of its estuary
Estuary
An estuary is a partly enclosed coastal body of water with one or more rivers or streams flowing into it, and with a free connection to the open sea....
while to seaward; Calais lay on its western margin and Bergues
Bergues
Bergues is a commune in the Nord department in northern France.It is situated to the south of Dunkirk and from the Belgian border. Locally it is referred to as "the other Bruges in Flanders"...
, now inland from Dunkirk, on its eastern one. By the time of the Viking
Viking
The term Viking is customarily used to refer to the Norse explorers, warriors, merchants, and pirates who raided, traded, explored and settled in wide areas of Europe, Asia and the North Atlantic islands from the late 8th to the mid-11th century.These Norsemen used their famed longships to...
settlements on this coast, Dunkirk was developing on the dune
Dune
In physical geography, a dune is a hill of sand built by wind. Dunes occur in different forms and sizes, formed by interaction with the wind. Most kinds of dunes are longer on the windward side where the sand is pushed up the dune and have a shorter "slip face" in the lee of the wind...
s, offshore across the estuarine marsh from Bergues. Gravelines was the later port at the seaward end of the river as it became, after the area of the estuary was reclaimed. The dates of these events are imprecise but the modern pattern was firmly established by 1588, the time of the Spanish Armada
Spanish Armada
This article refers to the Battle of Gravelines, for the modern navy of Spain, see Spanish NavyThe Spanish Armada was the Spanish fleet that sailed against England under the command of the Duke of Medina Sidonia in 1588, with the intention of overthrowing Elizabeth I of England to stop English...
, when an approximation to the modern course of the lowland river formed the boundary between the Spanish Netherlands and France
France
The French Republic , The French Republic , The French Republic , (commonly known as France , is a unitary semi-presidential republic in Western Europe with several overseas territories and islands located on other continents and in the Indian, Pacific, and Atlantic oceans. Metropolitan France...
. 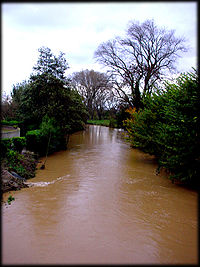