Overview
Saltwater intrusion is the movement of saline water
Saline water
Saline water is a general term for water that contains a significant concentration of dissolved salts . The concentration is usually expressed in parts per million of salt....
into freshwater aquifer
Aquifer
An aquifer is a wet underground layer of water-bearing permeable rock or unconsolidated materials from which groundwater can be usefully extracted using a water well. The study of water flow in aquifers and the characterization of aquifers is called hydrogeology...
s. Most often, it is caused by ground-water pumping from coastal wells, or from construction of navigation channels or oil field canals. The channels and canals provide conduits for salt water to be brought into fresh water marshes. Salt water intrusion can also occur as the result of a natural process like a storm surge from a hurricane.

How does saltwater intrusion effect the ecosytem?

When fresh water is withdrawn at a faster rate than it can be replenished, the water table is drawn down as a result. This draw-down also reduces the hydrostatic pressure. When this happens near an ocean coastal area, salt water from the ocean is pulled into the fresh water aquifer. The result is that the aquifer becomes contaminated with salt water. This is happening to many coastal communities.

Saltwater intrusion happens when saltwater is drawn-in (from the sea
Ocean
An ocean is a major body of saline water, and a principal component of the hydrosphere. Approximately 71% of the Earth's surface is covered by ocean, a continuous body of water that is customarily divided into several principal oceans and smaller seas.More than half of this area is over 3,000...
) into freshwater
Freshwater
Fresh water is naturally occurring water on the Earth's surface in ice sheets, ice caps, glaciers, bogs, ponds, lakes, rivers and streams, and underground as groundwater in aquifers and underground streams. Fresh water is generally characterized by having low concentrations of dissolved salts and...
aquifers. This behavior is caused because sea water has a higher density
Density
The mass density or density of a material is defined as its mass per unit volume. The symbol most often used for density is ρ . In some cases , density is also defined as its weight per unit volume; although, this quantity is more properly called specific weight...
(which is because it carries more solutes) than freshwater. This difference in density causes the pressure
Pressure
Pressure is the force per unit area applied in a direction perpendicular to the surface of an object. Gauge pressure is the pressure relative to the local atmospheric or ambient pressure.- Definition :...
under a column of saltwater to be greater than the pressure under a column of the same height of freshwater. If these two columns are connected at the bottom, then the pressure difference would cause a flow of saltwater column to the freshwater column until the pressure equalizes.

Pumping
Pumping
Pumping can refer to:*The operation of a pump, for moving a liquid from one location to another**The use of a breast pump or milking machine for extraction of milk*Gastric lavage The process of cleaning the contents of the stomach...
of fresh water from an aquifer reduces the water pressure and intensifies the effect, drawing salt water into new areas. When freshwater levels drop, saltwater intrusion can proceed inland, reaching the pumped well
Water well
A water well is an excavation or structure created in the ground by digging, driving, boring or drilling to access groundwater in underground aquifers. The well water is drawn by an electric submersible pump, a trash pump, a vertical turbine pump, a handpump or a mechanical pump...
. Then saltwater, unfit for drinking or irrigation
Irrigation
Irrigation may be defined as the science of artificial application of water to the land or soil. It is used to assist in the growing of agricultural crops, maintenance of landscapes, and revegetation of disturbed soils in dry areas and during periods of inadequate rainfall...
, is produced by the pump. To prevent this, more and more countries adopt extensive monitoring schemes and numerical models to assess how much water can be pumped without causing such effects.

The first physical formulations of saltwater intrusion were made by W. Badon-Ghijben (1888, 1889) and A. Herzberg (1901), thus called the Ghyben-Herzberg relation. They derived analytical solutions to approximate the intrusion behavior, which are based on a number of assumptions that do not hold in all field cases.

The figure shows the Ghyben-Herzberg relation. In the equation,

and that below sea level is represented as

is the density of freshwater and

is the density of saltwater. Freshwater has a density of about 1.000 grams per cubic centimeter (g/cm3) at 20 °C, whereas that of seawater is about 1.025 g/cm3. The equation can be simplified to

In the 20th century the higher computing
Computer
A computer is a programmable machine designed to sequentially and automatically carry out a sequence of arithmetic or logical operations. The particular sequence of operations can be changed readily, allowing the computer to solve more than one kind of problem...
power allowed the use of numerical methods (usually finite difference
Finite difference
A finite difference is a mathematical expression of the form f − f. If a finite difference is divided by b − a, one gets a difference quotient...
s or finite elements) that need fewer assumptions and can be applied more generally.

Modeling of saltwater intrusion is considered difficult. Some typical difficulties that arise are: 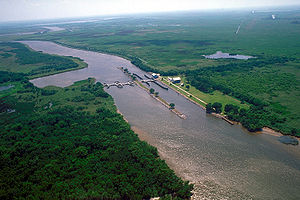 Saltwater intrusion is also an issue where a lock separates salt water from fresh water (for example the Hiram M. Chittenden Locks
Hiram M. Chittenden Locks
The Hiram M. Chittenden Locks are a complex of locks that sit at the west end of Salmon Bay, part of Seattle's Lake Washington Ship Canal. They are known locally as the Ballard Locks after the neighborhood to their north...
in Washington). In this case a collection basin was built from which the salt water can be pumped back to the sea. Some of the intruding salt water is also pumped to the fish ladder
Fish ladder
A fish ladder, also known as a fishway, fish pass or fish steps, is a structure on or around artificial barriers to facilitate diadromous fishes' natural migration. Most fishways enable fish to pass around the barriers by swimming and leaping up a series of relatively low steps into the waters on...
to make it more attractive to migrating fish
Fish
Fish are a paraphyletic group of organisms that consist of all gill-bearing aquatic vertebrate animals that lack limbs with digits. Included in this definition are the living hagfish, lampreys, and cartilaginous and bony fish, as well as various extinct related groups...
.