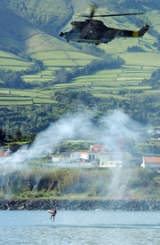 Encyclopedia
The Aérospatiale SA 330 Puma is a four-bladed, twin-engined medium transport/utility helicopter
Helicopter
A helicopter is a type of rotorcraft in which lift and thrust are supplied by one or more engine-driven rotors. This allows the helicopter to take off and land vertically, to hover, and to fly forwards, backwards, and laterally...
. The Puma was originally manufactured by Sud Aviation
Sud Aviation
Sud-Aviation was a French state-owned aircraft manufacturer, originating from the merger of Sud-Est and Sud-Ouest on March 1, 1957...
of France
France
The French Republic , The French Republic , The French Republic , (commonly known as France , is a unitary semi-presidential republic in Western Europe with several overseas territories and islands located on other continents and in the Indian, Pacific, and Atlantic oceans. Metropolitan France...
.

The SA 330 Puma was originally developed by Sud Aviation
Sud Aviation
Sud-Aviation was a French state-owned aircraft manufacturer, originating from the merger of Sud-Est and Sud-Ouest on March 1, 1957...
to meet a requirement of the French Army
French Army
The French Army, officially the Armée de Terre , is the land-based and largest component of the French Armed Forces.As of 2010, the army employs 123,100 regulars, 18,350 part-time reservists and 7,700 Legionnaires. All soldiers are professionals, following the suspension of conscription, voted in...
for a medium-sized all-weather helicopter. The helicopter also had to be capable of operating by day and night as well as in a wide variety of climates.

In 1967, the Puma was also selected by the Royal Air Force
Royal Air Force
The Royal Air Force is the aerial warfare service branch of the British Armed Forces. Formed on 1 April 1918, it is the oldest independent air force in the world...
(RAF) and given the designation
British military aircraft designation systems
British military aircraft designations are used to refer to aircraft types and variants operated by the armed forces of the United Kingdom.Since the end of the First World War, aircraft types in British military service have generally been known by a name British military aircraft designations are...
Puma HC Mk 1. As a result of this decision, the SA 330 was included in a joint production agreement between Aerospatiale and Westland Helicopters
Westland Helicopters
Westland Helicopters was a British aerospace company. Originally Westland Aircraft, the company focused on helicopters after the Second World War. It merged with several other British firms in 1961...
of the UK, which also resulted in the purchase of Aérospatiale Gazelle
Aérospatiale Gazelle
The Aérospatiale Gazelle is a five-seat light helicopter, powered by a single turbine engine. It was designed and manufactured in France by Sud Aviation . It was also manufactured under licence by Westland Aircraft in the United Kingdom , by SOKO in Yugoslavia and ABHCO in Egypt...
by the United Kingdom and the Westland Lynx
Westland Lynx
The Westland Lynx is a British multi-purpose military helicopter designed and built by Westland Helicopters at its factory in Yeovil. Originally intended as a utility craft for both civil and naval usage, military interest led to the development of both battlefield and naval variants...
by France. This resulted in Westland building components for the Puma, and assembling the RAF's Pumas.

The first of two Puma prototypes flew on 15 April 1965. Six pre-production models were also built, the last of which flew on 30 July 1968. The first production SA 330 Puma flew in September 1968, with deliveries to the French Army starting in early 1969.

Production of the SA 330 Puma by Aérospatiale ceased in 1987, by which time a total of 697 had been sold. The Puma was then replaced by an upgraded and improved version, the Eurocopter AS332 Super Puma. 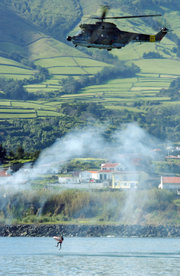 SA 330 modified to carry an Orchidée battlefiled surveillance radar system with a rotating underfuselage antenna, for the French Army. One demonstrator was built, flying in 1986. The Orchidée programme was cancelled in 1990, but the prototype rushed back into service in 1991 to serve in the Gulf War
Gulf War
The Persian Gulf War , commonly referred to as simply the Gulf War, was a war waged by a U.N.-authorized coalition force from 34 nations led by the United States, against Iraq in response to Iraq's invasion and annexation of Kuwait.The war is also known under other names, such as the First Gulf...
, leading to production of a similar system based on the Eurocopter Cougar
Eurocopter Cougar
-See also:-External links:* *...
.

Version produced by Westland Helicopters for the RAF under the designation Puma HC Mk. 1.


Versions by other manufacturers

Atlas Aircraft Corporation Oryx
Atlas Oryx
The Atlas Oryx is a medium-sized utility helicopter manufactured by the Atlas Aircraft Corporation of South Africa.-Design and development:...
: This is a remanufactured and upgraded SA 330 Puma built for the South African Air Force
South African Air Force
The South African Air Force is the air force of South Africa, with headquarters in Pretoria. It is the world's second oldest independent air force, and its motto is Per Aspera Ad Astra...
.
IPTN NAS 330J: This is a version that was assembled by IPTN of Indonesia
Indonesia
Indonesia , officially the Republic of Indonesia , is a country in Southeast Asia and Oceania. Indonesia is an archipelago comprising approximately 13,000 islands. It has 33 provinces with over 238 million people, and is the world's fourth most populous country. Indonesia is a republic, with an...
under the local designation NAS 330J and the Aerospatiale designation of SA 330J. Eleven units were produced.
IAR 330
IAR 330
|-See also:-External links:*...
: This is a licence-built
Licence-built
The term licence-built refers to an object manufactured by one organisation with the authorisation of the organisation that owns the intellectual property of the design...
version of the SA 330 Puma manufactured by Industria Aeronautică Română
Industria Aeronautica Româna
Industria Aeronautică Română or Romanian Aeronautic Industry in English, is a Romanian aerospace manufacturer founded in 1925. Based in Ghimbav, near Braşov, Romania, the company employs around 1200 specialists including more than 170 engineers...
of Romania
Romania
Romania is a country located at the crossroads of Central and Southeastern Europe, on the Lower Danube, within and outside the Carpathian arch, bordering on the Black Sea...
. Designated as the SA 330L by Aerospatiale.
IAR-330 Puma SOCAT: 24 modified for antitank warfare.
IAR-330 Puma Naval: 3 modified for the Romanian Navy, using the SOCAT avionics.
Westland Puma HC Mk 1

This is the SA 330E version assembled by Westland Helicopters for the RAF and first flown on 25 November 1970. This is basically similar to the SA 330B used by France. The RAF placed an initial order for 40 Pumas in 1967, with a further eight attrition replacement aircraft in 1979. 30 of these are planned to be upgraded to Puma HC Mk 2 standard, with new Turbomeca Makila engines, revised cockpit displays and new communications, navigation and defensive systems.

Democratic Republic of the Congo

In Red Dawn
Red Dawn
Red Dawn is a 1984 American war film directed by John Milius and co-written by Milius and Kevin Reynolds. It stars Patrick Swayze, C. Thomas Howell, Lea Thompson, Charlie Sheen and Jennifer Grey....
(1984) and most notably Rambo: First Blood Part II
Rambo: First Blood Part II
Rambo: First Blood Part II is a 1985 action film. A sequel to 1982's First Blood, it is the second installment in the Rambo series starring Sylvester Stallone, who reprises his role as Vietnam veteran John Rambo...
(1985) and Rambo III
Rambo III
Rambo III is an American Action film released on May 25, 1988. It is the third film in the Rambo series following First Blood and Rambo: First Blood Part II...
(1988), an SA 330 Puma was equipped with stub wings and a gun turret to mimic a Soviet Mil Mi-24
Mil Mi-24
The Mil Mi-24 is a large helicopter gunship and attack helicopter and low-capacity troop transport with room for 8 passengers. It is produced by Mil Moscow Helicopter Plant and operated since 1972 by the Soviet Air Force, its successors, and by over thirty other nations.In NATO circles the export...
Hind.