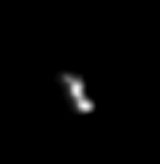 Encyclopedia
9969 Braille is a small Mars-crossing asteroid that orbits the Sun
Sun
The Sun is the star at the center of the Solar System. It is almost perfectly spherical and consists of hot plasma interwoven with magnetic fields...
once every 3.58 years. It was discovered in 1992 by astronomers at Palomar observatory
Palomar Observatory
Palomar Observatory is a privately owned observatory located in San Diego County, California, southeast of Pasadena's Mount Wilson Observatory, in the Palomar Mountain Range. At approximately elevation, it is owned and operated by the California Institute of Technology...
and later named after Louis Braille
Louis Braille
Louis Braille was the inventor of braille, a system of reading and writing used by people who are blind or visually impaired...
, the inventor of the writing system for the blind
Braille
The Braille system is a method that is widely used by blind people to read and write, and was the first digital form of writing.Braille was devised in 1825 by Louis Braille, a blind Frenchman. Each Braille character, or cell, is made up of six dot positions, arranged in a rectangle containing two...
. It was photographed in closeup by the spacecraft Deep Space 1
Deep Space 1
Deep Space 1 is a spacecraft of the NASA New Millennium Program dedicated to testing a payload of advanced, high risk technologies....
in 1999, but a malfunction resulted in indistinct images.

Discovered on May 27, 1992, by E. F. Helin and K. J. Lawrence working at the Palomar observatory
Palomar Observatory
Palomar Observatory is a privately owned observatory located in San Diego County, California, southeast of Pasadena's Mount Wilson Observatory, in the Palomar Mountain Range. At approximately elevation, it is owned and operated by the California Institute of Technology...
as part of NASA's Planet-Crossing Asteroid Survey
Planet-Crossing Asteroid Survey
The Palomar Planet Crossing Asteroid Survey was initiated by Eleanor F. Helin and Eugene M. Shoemaker in 1973. This program is responsible for the discovery of several thousand asteroids of all types including a large number of Near-Earth Asteroids , over 200 high inclination objects, other rare...
, it was given the provisional designation 1992 KD. Later, it was renamed Braille in honour of Louis Braille
Louis Braille
Louis Braille was the inventor of braille, a system of reading and writing used by people who are blind or visually impaired...
as suggested by Kennedy Space Center
Kennedy Space Center
The John F. Kennedy Space Center is the NASA installation that has been the launch site for every United States human space flight since 1968. Although such flights are currently on hiatus, KSC continues to manage and operate unmanned rocket launch facilities for America's civilian space program...
software engineer
Software engineer
A software engineer is an engineer who applies the principles of software engineering to the design, development, testing, and evaluation of the software and systems that make computers or anything containing software, such as computer chips, work.- Overview :...
Kerry Babcock in The Planetary Society's contest titled "Name That Asteroid".

Braille has an unusually inclined orbit, and belongs to the somewhat rare class of asteroids known as Mars-crossing asteroids. Simulations of its orbit
Orbit
In physics, an orbit is the gravitationally curved path of an object around a point in space, for example the orbit of a planet around the center of a star system, such as the Solar System...
by scientists of the Deep Space 1 project predict that it will evolve into an Earth-crossing orbit in about 4000 years. Although its closest approach to the Sun
Sun
The Sun is the star at the center of the Solar System. It is almost perfectly spherical and consists of hot plasma interwoven with magnetic fields...
is closer than Mars
Mars
Mars is the fourth planet from the Sun in the Solar System. The planet is named after the Roman god of war, Mars. It is often described as the "Red Planet", as the iron oxide prevalent on its surface gives it a reddish appearance...
orbit, its highly elliptical orbit takes it almost half-way to Jupiter
Jupiter
Jupiter is the fifth planet from the Sun and the largest planet within the Solar System. It is a gas giant with mass one-thousandth that of the Sun but is two and a half times the mass of all the other planets in our Solar System combined. Jupiter is classified as a gas giant along with Saturn,...
at its apoapsis, and as such its semi-major axis
Semi-major axis
The major axis of an ellipse is its longest diameter, a line that runs through the centre and both foci, its ends being at the widest points of the shape...
is too large for it to be classified as an Amor asteroid
Amor asteroid
The Amor asteroids are a group of near-Earth asteroids named after the asteroid 1221 Amor. They approach the orbit of the Earth from beyond, but do not cross it. Most Amors do cross the orbit of Mars...
.

Braille is a Q-type asteroid
Q-type asteroid
Q-type asteroids are relatively uncommon inner-belt asteroids with a strong, broad 1 micrometre olivine and pyroxene feature, and a spectral slope that indiciates the presence of metal...
, composed mostly of olivine
Olivine
The mineral olivine is a magnesium iron silicate with the formula 2SiO4. It is a common mineral in the Earth's subsurface but weathers quickly on the surface....
and pyroxene
Pyroxene
The pyroxenes are a group of important rock-forming inosilicate minerals found in many igneous and metamorphic rocks. They share a common structure consisting of single chains of silica tetrahedra and they crystallize in the monoclinic and orthorhombic systems...
. Early ground-based observations had suggested that it could have been a V-type asteroid
V-type asteroid
The spectra of the V-type asteroids or Vestoids are similar to that of 4 Vesta, by far the largest asteroid in this class ....
with similarities of composition between it and the much larger 4 Vesta
4 Vesta
Vesta, formally designated 4 Vesta, is one of the largest asteroids, with a mean diameter of about . It was discovered by Heinrich Wilhelm Olbers on March 29, 1807, and is named after the Roman virgin goddess of home and hearth, Vesta....
. The asteroid is irregularly shaped, measuring approximately 2.1 km × 1 km × 1 km.

The main purpose of the Deep Space 1 mission was technology testing, but the encounter with Braille was of strong scientific value. No lone asteroid as small as Braille had previously been observed from such a short distance.