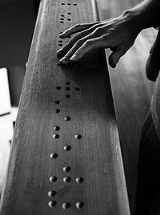 Overview
The Braille system is a method that is widely used by blind
Blindness
Blindness is the condition of lacking visual perception due to physiological or neurological factors.Various scales have been developed to describe the extent of vision loss and define blindness...
people to read and write, and was the first digital form of writing.

Braille was devised in 1825 by Louis Braille
Louis Braille
Louis Braille was the inventor of braille, a system of reading and writing used by people who are blind or visually impaired...
, a blind Frenchman. Each Braille character, or cell, is made up of six dot positions, arranged in a rectangle
Rectangle
In Euclidean plane geometry, a rectangle is any quadrilateral with four right angles. The term "oblong" is occasionally used to refer to a non-square rectangle...
containing two columns of three dots each. A dot may be raised at any of the six positions to form sixty-four (26) possible subsets, including the arrangement in which no dots are raised.