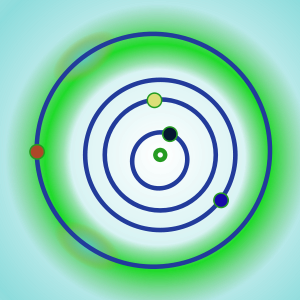 The Amor asteroids are a group of near-Earth asteroids named after the asteroid 1221 Amor
1221 Amor
1221 Amor is the namesake of the Amor asteroids, a group of near-Earth asteroids whose orbits range between those of Earth and Mars. Amors are often Mars-crossers but they are not Earth-crossers....
. They approach the orbit of the Earth from beyond, but do not cross it. Most Amors do cross the orbit of Mars. The two moons of Mars, Deimos
Deimos (moon)
Deimos is the smaller and outer of Mars's two moons . It is named after Deimos, a figure representing dread in Greek Mythology. Its systematic designation is '.-Discovery:Deimos was discovered by Asaph Hall, Sr...
and Phobos
Phobos (moon)
Phobos is the larger and closer of the two natural satellites of Mars. Both moons were discovered in 1877. With a mean radius of , Phobos is 7.24 times as massive as Deimos...
, may be Amor asteroids that were captured by Mars' gravity.

The most famous member of this group is 433 Eros
433 Eros
433 Eros is a near-Earth asteroid discovered in 1898, and the first asteroid to be orbited by a probe . It is an S-type asteroid approximately 34.4×11.2×11.2 km in size, the second-largest NEA after 1036 Ganymed, and belongs to the Amor group.Eros is a Mars-crosser asteroid, the first known...
, which was the first asteroid to be orbit
Orbit
In physics, an orbit is the gravitationally curved path of an object around a point in space, for example the orbit of a planet around the center of a star system, such as the Solar System...
ed and then landed upon by a human probe (NEAR Shoemaker
NEAR Shoemaker
The Near Earth Asteroid Rendezvous - Shoemaker , renamed after its 1996 launch in honor of planetary scientist Eugene M. Shoemaker, was a robotic space probe designed by the Johns Hopkins University Applied Physics Laboratory for NASA to study the near-Earth asteroid Eros from close orbit over a...
).

There are three general criteria an asteroid must meet to be considered a member of the Amor asteroid class.


These three criteria are boiled down to a single test for membership. If the asteroid has a perihelion between 1.000 AU and 1.300 AU, it is considered an Amor asteroid. Any asteroid with this trait is considered an Amor class asteroid, regardless of its semi-major axis, eccentricity, aphelion, inclination, physical properties, orbital stability, or place of origin.

Amor asteroids can be partitioned into four sub-groups, depending on their average distance from the Sun.

The Amor I subgroup consists of Amor asteroids whose semi-major axes are in between Earth and Mars. That is, they have a semi-major axis between 1.000 and 1.523 AU
Astronomical unit
An astronomical unit is a unit of length equal to about or approximately the mean Earth–Sun distance....
. Less than one fifth of Amor asteroids belong to this subgroup. Amor I asteroids have lower eccentricities than the other subgroups of Amors.

Amor I asteroids that do cross the orbit of Mars (like 433 Eros
433 Eros
433 Eros is a near-Earth asteroid discovered in 1898, and the first asteroid to be orbited by a probe . It is an S-type asteroid approximately 34.4×11.2×11.2 km in size, the second-largest NEA after 1036 Ganymed, and belongs to the Amor group.Eros is a Mars-crosser asteroid, the first known...
), do so from the inside.

The Amor II subgoup has a semi-major axis between that of Mars (1.52 AU) and the asteroid belt
Asteroid belt
The asteroid belt is the region of the Solar System located roughly between the orbits of the planets Mars and Jupiter. It is occupied by numerous irregularly shaped bodies called asteroids or minor planets...
(2.12 AU). About a third of Amors, including 1221 Amor
1221 Amor
1221 Amor is the namesake of the Amor asteroids, a group of near-Earth asteroids whose orbits range between those of Earth and Mars. Amors are often Mars-crossers but they are not Earth-crossers....
, belong to this group. They have moderate eccentricities (from 0.17 to 0.52), and all cross the orbit of Mars from the outside. Their orbits usually take them out into the asteroid belt.

Almost half of all Amor asteroids lie within the asteroid belt, and thus have semi-major axes between 2.12 and 3.57 AU. These can be considered main-belt objects with high enough eccentricities to come near the Earth, usually 0.4 to 0.6.

Because their eccentricities are very large, about a third of Amor III asteroids have orbits that stretch beyond the asteroid belt and come within 1 AU of Jupiter. 719 Albert
719 Albert
719 Albert is a Mars-crossing, Amor asteroid; it was the second one discovered after 433 Eros.-Discovery:Discovered in 1911 by Johann Palisa, the asteroid was named after one of the Imperial Observatory in Vienna's major benefactors, Albert Salomon von Rothschild, who had died some months before...
and 1036 Ganymed
1036 Ganymed
1036 Ganymed is the largest Amor asteroid, at about 32 km in diameter. It was discovered by Walter Baade on October 23, 1924, and is named after Ganymede, the Trojan prince turned god whom Zeus designated the cupbearer to the Greek gods...
are two such asteroids. The most extreme Amor III asteroids (such as 5370 Taranis
5370 Taranis
5370 Taranis is an Amor asteroid discovered on September 2, 1986 by Alain Maury at Palomar. It is one of very few asteroids located in the 2 : 1 mean motion resonance with Jupiter.- External links :*...
) are actually Jupiter crossers.

Because they lie within the asteroid belt, several Amor III asteroids also belong to subgroups of the asteroid belt. For instance, the first Alinda asteroid (in 1:3 resonance with Jupiter and close to a 4:1 resonance with Earth) discovered was 887 Alinda
887 Alinda
887 Alinda is an asteroid orbiting the Sun. It was originally discovered by German astronomer Max Wolf in 1918. It lies within the main asteroid belt and is the namesake for the Alinda family group of asteroids, although it is also classified as an Amor III asteroid...
.

There are only 14 known Amor asteroids whose average distance from the Sun is beyond the asteroid belt. Their semi-major axes are greater than 3.57 AU and they are called Amor IV asteroids. All are Jupiter crossers. Though they have very high eccentricities (0.65 to 0.75), their orbits are not as eccentric as those of most Damocloids and comets, which tend to have eccentricities around 0.9. The only named Amor IV asteroid is 3552 Don Quixote
3552 Don Quixote
3552 Don Quixote is a small main-belt, Amor, Mars crossing, potentially hazardous asteroid. It has a highly inclined comet-like orbit, and measures about 19 km in diameter. Its rotation period is 7.7 hours...
and the only other numbered Amor IV asteroid is . So far, no Amor asteroid has been discovered that crosses the orbit of Saturn.

An outer Earth-grazer asteroid is an asteroid which is normally beyond the Earth, but which can get closer to the Sun than Earth's aphelion
Apsis
An apsis , plural apsides , is the point of greatest or least distance of a body from one of the foci of its elliptical orbit. In modern celestial mechanics this focus is also the center of attraction, which is usually the center of mass of the system...
(1.0167 AU), but not closer than Earth's perihelion (0.9833 AU). In other words, the asteroid's perihelion is between Earth's perihelion and aphelion. Outer Earth-grazer asteroids are split between Amor and Apollo asteroids, depending on the definition used.

If one uses the more precise definition of an Amor, those outer Earth grazers which never get closer to the Sun than the Earth does (at any angle along its orbit) are Amors, and those that do are Apollos. Some "simple" Amor asteroids are also "precise" Apollos, while some "precise" Amors are also "simple" Apollos. Which definition is used is only relevant to outer Earth grazers.

Most potentially hazardous asteroids (PHAs) are either Aten asteroid
Aten asteroid
The Aten asteroids are a group of near-Earth asteroids, named after the first of the group to be discovered . They are defined by having semi-major axes of less than one astronomical unit...
s or Apollo asteroid
Apollo asteroid
The Apollo asteroids are a group of near-Earth asteroids named after 1862 Apollo, the first asteroid of this group to be discovered by Karl Wilhelm Reinmuth...
s, and therefore cross the orbit of the Earth. However, one tenth of PHAs are Amor asteroids. In order to be considered a PHA, its orbit has to get within 0.05 AU from the Earth's orbit and the object has to be "big enough" to be a threat. An Amor asteroid therefore has to have a perihelion of less than 1.05 AU to be considered a PHA. About a fifth of Amors come this close to the Sun, and about a fifth of these are actually PHAs. Of the fifty known Amor PHAs, 2061 Anza
2061 Anza
2061 Anza is an Amor asteroid discovered on October 22, 1960 by Henry L. Giclas at Flagstaff .- External links :...
, 3908 Nyx
3908 Nyx
3908 Nyx is an Amor and Mars-crosser asteroid. It was discovered by Hans-Emil Schuster on August 6, 1980, and is named after Nyx, the Greek goddess of the night, after which Pluto's moon Nix is also named...
and 3671 Dionyses have permanent names.