Encyclopedia
The AD 365 Crete earthquake was an undersea earthquake
Earthquake
An earthquake is the result of a sudden release of energy in the Earth's crust that creates seismic waves. The seismicity, seismism or seismic activity of an area refers to the frequency, type and size of earthquakes experienced over a period of time...
that occurred at about sunrise on 21 July 365 in the Eastern Mediterranean, with an assumed epicentre near Crete
Crete
Crete is the largest and most populous of the Greek islands, the fifth largest island in the Mediterranean Sea, and one of the thirteen administrative regions of Greece. It forms a significant part of the economy and cultural heritage of Greece while retaining its own local cultural traits...
. Geologists today estimate the quake to have been 8 on the Richter Scale or higher, causing widespread destruction in central and southern Greece
Greece
Greece , officially the Hellenic Republic , and historically Hellas or the Republic of Greece in English, is a country in southeastern Europe....
, northern Libya
Libya
Libya is an African country in the Maghreb region of North Africa bordered by the Mediterranean Sea to the north, Egypt to the east, Sudan to the southeast, Chad and Niger to the south, and Algeria and Tunisia to the west....
, Egypt
Egypt
Egypt , officially the Arab Republic of Egypt, Arabic: , is a country mainly in North Africa, with the Sinai Peninsula forming a land bridge in Southwest Asia. Egypt is thus a transcontinental country, and a major power in Africa, the Mediterranean Basin, the Middle East and the Muslim world...
, Cyprus
Cyprus
Cyprus , officially the Republic of Cyprus , is a Eurasian island country, member of the European Union, in the Eastern Mediterranean, east of Greece, south of Turkey, west of Syria and north of Egypt. It is the third largest island in the Mediterranean Sea.The earliest known human activity on the...
, and Sicily
Sicily
Sicily is a region of Italy, and is the largest island in the Mediterranean Sea. Along with the surrounding minor islands, it constitutes an autonomous region of Italy, the Regione Autonoma Siciliana Sicily has a rich and unique culture, especially with regard to the arts, music, literature,...
. In Crete, nearly all towns were destroyed.

The Crete earthquake was followed by a tsunami
Tsunami
A tsunami is a series of water waves caused by the displacement of a large volume of a body of water, typically an ocean or a large lake...
which devastated the southern and eastern coasts of the Mediterranean, particularly Libya
Libya
Libya is an African country in the Maghreb region of North Africa bordered by the Mediterranean Sea to the north, Egypt to the east, Sudan to the southeast, Chad and Niger to the south, and Algeria and Tunisia to the west....
, Alexandria
Alexandria
Alexandria is the second-largest city of Egypt, with a population of 4.1 million, extending about along the coast of the Mediterranean Sea in the north central part of the country; it is also the largest city lying directly on the Mediterranean coast. It is Egypt's largest seaport, serving...
and the Nile Delta
Nile Delta
The Nile Delta is the delta formed in Northern Egypt where the Nile River spreads out and drains into the Mediterranean Sea. It is one of the world's largest river deltas—from Alexandria in the west to Port Said in the east, it covers some 240 km of Mediterranean coastline—and is a rich...
, killing thousands and hurling ships 3 km (1.9 mi) inland. The quake left a deep impression on the late antique
Late Antiquity
Late Antiquity is a periodization used by historians to describe the time of transition from Classical Antiquity to the Middle Ages, in both mainland Europe and the Mediterranean world. Precise boundaries for the period are a matter of debate, but noted historian of the period Peter Brown proposed...
mind, and numerous writers of the time referred in their works to the event.

Recent geological studies view the AD 365 Crete earthquake in connection with a clustering of major seismic activity in the eastern Mediterranean between the 4th century and the 6th century AD which may have reflected a reactivation of all major plate boundaries in the region. The earthquake is thought to be responsible for an uplift of 9 m of the island of Crete, which is estimated to correspond to a seismic moment
Seismic moment
Seismic moment is a quantity used by earthquake seismologists to measure the size of an earthquake. The scalar seismic moment M_0 is defined by the equationM_0=\mu AD, where*\mu is the shear modulus of the rocks involved in the earthquake...
of ~10^29 dyne
Dyne
In physics, the dyne is a unit of force specified in the centimetre-gram-second system of units, a predecessor of the modern SI. One dyne is equal to exactly 10 µN...
cm. An earthquake of such a size exceeds all modern ones known to have affected the region. However, a recent reassessment of radiocarbon
Carbon-14
Carbon-14, 14C, or radiocarbon, is a radioactive isotope of carbon with a nucleus containing 6 protons and 8 neutrons. Its presence in organic materials is the basis of the radiocarbon dating method pioneered by Willard Libby and colleagues , to date archaeological, geological, and hydrogeological...
data indicates that the uplift most probably took place at a later date.

Researchers at the University of Cambridge
University of Cambridge
The University of Cambridge is a public research university located in Cambridge, United Kingdom. It is the second-oldest university in both the United Kingdom and the English-speaking world , and the seventh-oldest globally...
recently carbon dated corals on the coast of Crete
Crete
Crete is the largest and most populous of the Greek islands, the fifth largest island in the Mediterranean Sea, and one of the thirteen administrative regions of Greece. It forms a significant part of the economy and cultural heritage of Greece while retaining its own local cultural traits...
which were lifted 10 metres and clear of the water in one massive push. This indicates that the tsunami of AD 365 was generated by an earthquake in a steep fault in the Hellenic Trench
Hellenic Trench
The Hellenic Trench is a hemispherical-scale long narrow depression in the Ionian Sea.The hadal zone of the Hellenic trench is roughly to 5,300 metres deep. The names of the three major parts of the Hellenic trench are: Matapan Deep System or Matapan–Vavilov Deep, roughly , the...
near Crete. The scientists estimate that such a large uplift is only likely to occur once in 5,000 years, however the other segments of the fault could slip on a similar scale—and could happen every 800 years or so. It is unsure whether "one of the contiguous patches might slip in the future."

Historians continue to debate the question whether ancient sources refer to a single catastrophic
Disaster
A disaster is a natural or man-made hazard that has come to fruition, resulting in an event of substantial extent causing significant physical damage or destruction, loss of life, or drastic change to the environment...
earthquake in AD 365, or whether they represent a historical amalgamation of a number of earthquakes occurring between AD 350 and 450. The interpretation of the surviving literary evidence is complicated by the tendency of late antique writers to describe natural disasters as divine responses or warnings to political and religious events. In particular, the virulent antagonism between rising Christianity
Christianity
Christianity is a monotheistic religion based on the life and teachings of Jesus as presented in canonical gospels and other New Testament writings...
and paganism
Paganism
Paganism is a blanket term, typically used to refer to non-Abrahamic, indigenous polytheistic religious traditions....
at the time led contemporary writers to distort the evidence. Thus, the Sophist Libanius
Libanius
Libanius was a Greek-speaking teacher of rhetoric of the Sophist school. During the rise of Christian hegemony in the later Roman Empire, he remained unconverted and regarded himself as a Hellene in religious matters.-Life:...
and the church historian Sozomenus appear to conflate the great earthquake of AD 365 with other lesser ones to present it as either divine sorrow or wrath—depending on their viewpoint—for the death of emperor Julian
Julian the Apostate
Julian "the Apostate" , commonly known as Julian, or also Julian the Philosopher, was Roman Emperor from 361 to 363 and a noted philosopher and Greek writer....
, who had tried to restore the pagan religion, two years earlier.

On the whole, however, the relatively numerous references to earthquakes in a time which is otherwise characterized by a paucity of historical records strengthens the case for a period of heightened seismic activity. Kourion
Kourion
Kourion , also Curias or Latin: Curium, was a city in Cyprus, which endured from antiquity until the early Middle Ages. Kourion is situated on the south shores of the island to the west of the river Lycus , 16 M. P. from Amathus. , and was recorded by numerous ancient authors including Ptolemy...
on Cyprus, for example, is known to have been hit then by five strong earthquakes within a period of eighty years, leading to its permanent destruction. Additional evidence for the particularly devastating effect of the AD 365 earthquake is provided by a survey of excavations which document the destruction of many late antique towns and cities in the Eastern Mediterranean around AD 365. 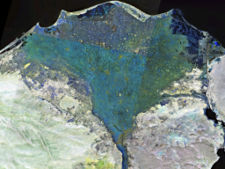 The Roman
Ancient Rome
Ancient Rome was a thriving civilization that grew on the Italian Peninsula as early as the 8th century BC. Located along the Mediterranean Sea and centered on the city of Rome, it expanded to one of the largest empires in the ancient world....
historian Ammianus Marcellinus
Ammianus Marcellinus
Ammianus Marcellinus was a fourth-century Roman historian. He wrote the penultimate major historical account surviving from Antiquity...
described in detail the tsunami hitting Alexandria and other places in the early hours of 21 July AD 365. His account is particularly noteworthy for clearly distinguishing the three main phases of a tsunami, namely an initial earthquake, the sudden retreat of the sea and an ensuing gigantic wave rolling inland:

Slightly after daybreak, and heralded by a thick succession of fiercely shaken thunderbolts, the solidity of the whole earth was made to shake and shudder, and the sea was driven away, its waves were rolled back, and it disappeared, so that the abyss of the depths was uncovered and many-shaped varieties of sea-creatures were seen stuck in the slime; the great wastes of those valleys and mountains, which the very creation had dismissed beneath the vast whirlpools, at that moment, as it was given to be believed, looked up at the sun's rays. Many ships, then, were stranded as if on dry land, and people wandered at will about the paltry remains of the waters to collect fish and the like in their hands; then the roaring sea as if insulted by its repulse rises back in turn, and through the teeming shoals dashed itself violently on islands and extensive tracts of the mainland, and flattened innumerable buildings in towns or wherever they were found. Thus in the raging conflict of the elements, the face of the earth was changed to reveal wondrous sights. For the mass of waters returning when least expected killed many thousands by drowning, and with the tides whipped up to a height as they rushed back, some ships, after the anger of the watery element had grown old, were seen to have sunk, and the bodies of people killed in shipwrecks lay there, faces up or down. Other huge ships, thrust out by the mad blasts, perched on the roofs of houses, as happened at Alexandria, and others were hurled nearly two miles from the shore, like the Laconian vessel near the town of Methone which I saw when I passed by, yawning apart from long decay.

The tsunami in AD 365 was so devastating that the anniversary of the disaster was still commemorated annually at the end of the 6th century in Alexandria as a "day of horror".