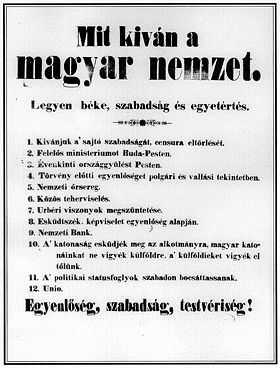 On the morning of March 15, 1848, revolutionaries marched around the city of Pest, reading Sándor Petőfi
Sándor Petofi
Sándor Petőfi , was a Hungarian poet and liberal revolutionary. He is considered as Hungary's national poet and he was one of the key figures of the Hungarian Revolution of 1848...
's Nemzeti dal
Nemzeti dal
The Nemzeti dal , written by Sándor Petőfi, is the poem that is said to have inspired the Hungarian Revolution of 1848. Petőfi read the poem aloud on March 15 in Vörösmarty Square in Budapest to a gathering crowd, which by the end was chanting the refrain as they began to march around the city,...
and the 12 points to the crowd (which swelled to thousands). Declaring an end to all forms of censorship
Censorship
thumb|[[Book burning]] following the [[1973 Chilean coup d'état|1973 coup]] that installed the [[Military government of Chile |Pinochet regime]] in Chile...
, they visited the printing presses of Landerer and Heckenast and printed Petőfi's poem together with the demands. A mass demonstration was held in front of the newly-built National Museum
Hungarian National Museum
- History:The Hungarian National Museum is said to have been founded in 1802 when Count Ferenc Széchényi set up the National Széchényi Library. This would then be followed a year later by the donating of a mineral collection by Széchényi’s wife. This led to the creation of the Hungarian National...
, after which the group left for the Buda
Buda
For detailed information see: History of Buda CastleBuda is the western part of the Hungarian capital Budapest on the west bank of the Danube. The name Buda takes its name from the name of Bleda the Hun ruler, whose name is also Buda in Hungarian.Buda comprises about one-third of Budapest's...
Chancellery (the Office of the Governor-General) on the other bank of the Danube
Danube
The Danube is a river in the Central Europe and the Europe's second longest river after the Volga. It is classified as an international waterway....
. When the crowd rallied in front of the Imperial Governing Council, the representatives of Emperor
Emperor of Austria
The Emperor of Austria was a hereditary imperial title and position proclaimed in 1804 by the Holy Roman Emperor Francis II, a member of the House of Habsburg-Lorraine, and continually held by him and his heirs until the last emperor relinquished power in 1918. The emperors retained the title of...
Ferdinand
Ferdinand I of Austria
Ferdinand I was Emperor of Austria, President of the German Confederation, King of Hungary and Bohemia , as well as associated dominions from the death of his father, Francis II, Holy Roman Emperor, until his abdication after the Revolutions of 1848.He married Maria Anna of Savoy, the sixth child...
agreed to sign the 12 points.

What the Hungarian nation wants.

Let there be peace, liberty, and concord!