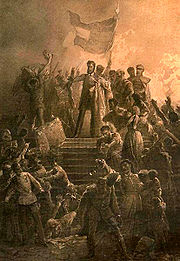 The poem has come to rank third after the Himnusz
Himnusz
"Himnusz" is a song beginning with the words Isten, áldd meg a magyart that's a musical poetic prayer that serves as the official national anthem of Hungary. True to its title, Himnusz presents a more solemn and dignified tone than many other lively national anthems...
and Szózat
Szózat
The Szózat is considered as a second national anthem of Hungary, beside the Himnusz. Usually only its first two stanzas are sung at national celebrations...
as a statement of Hungarian national identity.

The translation below of the "National Poem" is literal, attempting to convey the precise meaning of the original text.