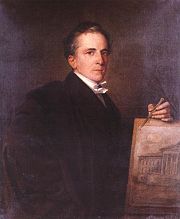 In 1949 an act mandated that the ethnographic and natural history part of the Hungarian National Museum had to split off of the main museum. This also helped with the setting up of the modern day National Széchényi Library
National Széchényi Library
The National Széchényi Library is a library in Budapest, Hungary. It is one of the two Hungarian national libraries, the other being the University of Debrecen Library.-History:...
. All of these separate museums are still interconnected and other museums and monuments have become affiliated with them over time. The most recent addition was the Castle Museum in Esztergom
Esztergom
Esztergom , is a city in northern Hungary, 46 km north-west of the capital Budapest. It lies in Komárom-Esztergom county, on the right bank of the river Danube, which forms the border with Slovakia there....
that joined in 1985.

The building where the Hungarian National Museum is currently located was built from 1837-1847. The style of the main building was laid out in a neo-classical style and was added onto by other artists in the form of statues, paintings and other architecture. The statues of the Portico were done by Raffael Monti of Milan. One of these is a famous statue of the allegoric figure of Hungary, holding a shield with the Hungarian coat of arms on it. On the sides of this figure there is Science on one and Art on the other. In addition the paintings that have been in the staircase and on the ceiling since 1875 were done by Károly Lotz
Károly Lotz
Lotz Károly Antal Pál, or Karl Anton Paul Lotz was a German-Hungarian painter.- Career :Karl Lotz was born in Bad Homburg vor der Höhe, Germany, the 7th and youngest surviving child of Wilhelm Christian Lotz and Antonia Höfflick ...
and Mór Than
Mór Than
Mór Than was a Hungarian painter.Born at Bečej, he was educated in Italy and Vienna beside his cooperation with similar famous painters in his homeland. He worked in a realistic – pre-impressionist style. His subjects were mostly historic events and portraits but also mythological or...
. There has also been a garden that is used primarily for various concerts. Various artists have performed here including Ferenc Liszt. Today the garden is the venue of the Museum Festival.

The Hungarian National Museum has seven permanent displays. The History of Hungary from the foundation of the state to 1990 Middle Ages is the first one that is mentioned. This display covers topics such as the age of the Arpads, the Turkish Age, Transylvania
Transylvania
Transylvania is a historical region in the central part of Romania. Bounded on the east and south by the Carpathian mountain range, historical Transylvania extended in the west to the Apuseni Mountains; however, the term sometimes encompasses not only Transylvania proper, but also the historical...
and the royal Hungary, etc.

The Museum also covers Modern and Contemporary History. The history section here begins with the Rákóczi War of Independence, in the display it shows different sections of his military attire and various coins. The history section then ends with the rise and fall of the communist system in Hungary where the various politics are looked at. In another hall on the second floor one can find out about the Scholar Hungarians who made the twentieth century.

The ground floor’s permanent exhibit is focused on Medieval and Early Modern Lapidary. This exhibit looks at various stone relics and the carvings that have been made into them. The majority of the items in this collection were discovered during the 60’s and 70’s since they looked for more relics post World War II.

The final permanent exhibit is placed in the basement of the museum. This is the Roman Lapidary exhibit, which is a collection of old roman stones. These are mainly inscribed and carved and have some reference to Hungarian history
History of Hungary
Hungary is a country in central Europe. Its history under this name dates to the early Middle Ages, when the Pannonian Basin was colonized by the Magyars, a semi-nomadic people from what is now central-northern Russia...
. 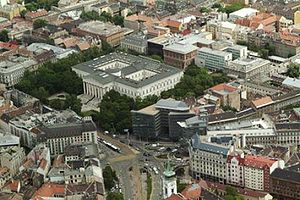 The museum is open from 10 am to 6 pm Tuesday through Sunday and is closed on Mondays.

The permanent exhibition is free of charge. Guided tours are offered.