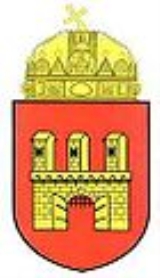 Buda (German
German language
German is a West Germanic language, related to and classified alongside English and Dutch. With an estimated 90 – 98 million native speakers, German is one of the world's major languages and is the most widely-spoken first language in the European Union....
: Ofen, Turkish
Turkish language
Turkish is a language spoken as a native language by over 83 million people worldwide, making it the most commonly spoken of the Turkic languages. Its speakers are located predominantly in Turkey and Northern Cyprus with smaller groups in Iraq, Greece, Bulgaria, the Republic of Macedonia, Kosovo,...
Budin) is the western part of the Hungarian
Hungary
Hungary , officially the Republic of Hungary , is a landlocked country in Central Europe. It is situated in the Carpathian Basin and is bordered by Slovakia to the north, Ukraine and Romania to the east, Serbia and Croatia to the south, Slovenia to the southwest and Austria to the west. The...
capital Budapest
Budapest
Budapest is the capital of Hungary. As the largest city of Hungary, it is the country's principal political, cultural, commercial, industrial, and transportation centre. In 2011, Budapest had 1,733,685 inhabitants, down from its 1989 peak of 2,113,645 due to suburbanization. The Budapest Commuter...
on the west bank of the Danube
Danube
The Danube is a river in the Central Europe and the Europe's second longest river after the Volga. It is classified as an international waterway....
. The name Buda takes its name from the name of Bleda
Bleda
Bleda was a Hun ruler, the brother of Attila the Hun.As nephews to Rugila, Attila and his elder brother Bleda succeeded him to the throne. His reign lasted for eleven years until his death. While it has been speculated throughout history that Attila murdered him on a hunting trip, no one knows...
the Hun ruler, whose name is also Buda in Hungarian.

Buda comprises about one-third of Budapest's
Budapest
Budapest is the capital of Hungary. As the largest city of Hungary, it is the country's principal political, cultural, commercial, industrial, and transportation centre. In 2011, Budapest had 1,733,685 inhabitants, down from its 1989 peak of 2,113,645 due to suburbanization. The Budapest Commuter...
complete territory and is mostly wooded and hilly. It is usually associated with a higher standard of living, although this depends on the area. Notable landmarks include the Buda Castle
Buda Castle
Buda Castle is the historical castle and palace complex of the Hungarian kings in Budapest, first completed in 1265. In the past, it was also called Royal Palace and Royal Castle ....
and the Citadella
Citadella
Citadella is the Hungarian word for Citadel, a kind of fortress. The word Citadella is exclusively used by other languages to address the Citadel located upon the top of the strategic Gellért Hill in Budapest, Hungary.-History:...
.

While Pest was mostly Hungarian in the 15th century, Buda had a German majority. Germans — also clinging to their language — partly crowded out, partly assimilated the Hungarians and Serbians they have found here. With the rural population moving in the capital city, in the 19th century slowly Hungarians became the majority in Buda too.