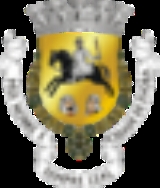 Encyclopedia
Évora (ˈɛvuɾɐ) is a municipality
Municipalities of Portugal
In Portugal, municipality or concelho is the most stable subdivision of Portugal since the foundation of the country.Portugal has an entirely separate system of cities and towns. Cities and towns are located in municipalities, but often do not have the same boundaries, even if built-up is continuous...
in Portugal
Portugal
Portugal , officially the Portuguese Republic is a country situated in southwestern Europe on the Iberian Peninsula. Portugal is the westernmost country of Europe, and is bordered by the Atlantic Ocean to the West and South and by Spain to the North and East. The Atlantic archipelagos of the...
. It has total area of 1307 km² (505 sq mi) with a population of 55,619 inhabitants. It is the seat of the Évora District and capital of the Alentejo region. The municipality is composed of 19 civil parishes
Freguesia
Freguesia is the Portuguese term for a secondary local administrative unit in Portugal and some of its former colonies, and a former secondary local administrative unit in Macau, roughly equivalent to an administrative parish. A freguesia is a subdivision of a concelho, the Portuguese synonym term...
, and is located in Évora District.

It contains the city of Évora.

Évora (latitude 38.33º, longitude 7º57', altitude 300 m) is situated in Alentejo (southern Portugal). It is the chief city of the district. The seat of the municipality is the city of Évora, composed by the civil parishes
Freguesia
Freguesia is the Portuguese term for a secondary local administrative unit in Portugal and some of its former colonies, and a former secondary local administrative unit in Macau, roughly equivalent to an administrative parish. A freguesia is a subdivision of a concelho, the Portuguese synonym term...
of Santo Antão, São Mamede and Sé e São Pedro in the historical centre and the urban parishes of Bacelo, Horta das Figueiras, Malagueira and Senhora da Saúde outside the ancient city walls where most of the population in fact reside. The remaining civil parishes in the municipality are rural or suburban and do not form part of the city for statistic purposes.

The freeway that serves Évora is the A6/E90. The municipality can be reached by the following motor routes:

Travel time from Lisbon by car (due east) via the toll road[A6] is about one and a half hours. Secondary, scenic roads can be taken, but the trip time is much longer (up to 3 hours). Due to a limited amount of tourist signs, a list of interesting points compiled prior to driving a route to Évora is important. Motor assistance services are reasonable but aimed at local commerce, not tourism.

Évora is in the heart of Alentejo region, an area consisting mostly of a soft rolling hills and plains. Alentejo's capital and largest city, Évora is a quite pleasant medium sized city and has numerous monuments. Due to its long history, monuments and buildings are its main attraction to outsiders. However there are numerous "Festas Populares" celebrating saints, holidays, "Feiras" (fairs) and cultural events (such as televised musical presentations) sponsored by the municipality and other organizations Such events are so common that locals hardly make reference to them. The city's wonderful backdrop is often featured in concerts.

Évora is the chief city of the Alentejo region, and plays a role as an important agricultural
Agriculture in Portugal
Agriculture in Portugal is based on small to medium-sized family-owned dispersed units, however, the sector also includes larger scale intensive farming export-oriented agrobusinesses backed by companies...
and services center. It is home to several institutions with great importance for the region, like the state-run University of Évora
University of Évora
The University of Évora is a public university in Évora, Portugal.-History:The University of Évora, the second oldest in Portugal, was founded in the 16th century by Cardinal Infante Dom Henrique , and by the Pope Paul IV, and it was delivered to the Society of Jesus.The Jesuit college...
and district hospital. Évora has tried to develop the aerospace
Aerospace
Aerospace comprises the atmosphere of Earth and surrounding space. Typically the term is used to refer to the industry that researches, designs, manufactures, operates, and maintains vehicles moving through air and space...
sector, and expects soon Embraer
Embraer
Embraer S.A. is a Brazilian aerospace conglomerate that produces commercial, military, and executive aircraft and provides aeronautical services....
industrial facilities.

Évora, as well as the surrounding area, has many hotel, bed-and-breakfast and various styles of accommodation. From the very expensive - Convento do Espinheiro, Heritage Hotel & Spa - to camping sites, there is a great variety, with something for all tastes and budgets.

Évora can also be reached by bus or train. The construction of a high speed train link
High-speed rail in Portugal
The government of Portugal plans to build a high-speed rail line from Lisbon to Madrid. The €7.8 billion plan, announced in February 2009, is part of an effort to stimulate the country's economy. The government argued that the plan would create 100,000 jobs...
to Lisbon and Madrid
Madrid
Madrid is the capital and largest city of Spain. The population of the city is roughly 3.3 million and the entire population of the Madrid metropolitan area is calculated to be 6.271 million. It is the third largest city in the European Union, after London and Berlin, and its metropolitan...
is planned.

There is a small airfield, the Évora Municipal Airport
Évora Airport
Évora Airport is a municipal airport that serves Évora, Portugal. Among the services available, are a Flight Information Service , a non-directional beacon and sunrise to sunset operation. The airport has two runways, the main runway being 01/19...
, currently without commercial airline service.
The closest major airports are: Beja
Beja Airport
Beja Airport is a portuguese airport that opened doors to civilian flights on April 15, 2011, having scheduled several charter flights to the United Kingdom and to Cape Verde. It is the only portuguese airport in Alentejo, the biggest portuguese region, with an area comparable to the size of...
, Lisbon, Faro
Faro Airport
-Incidents and accidents:*On 21 December 1992, Martinair Flight 495 skidded off the runway in bad weather at Faro Airport killing 54 passengers and two crew out of a total of 340 people on board....
and Badajoz
Badajoz Airport
Badajoz Airport is an airport located east of Badajoz, a city in Extremadura, Spain.The airport shares its runway and control tower with the Talavera la Real Air Base , an air base of the Spanish Air Force, named for the nearby municipality of Talavera la Real.- Airlines and destinations :-...
.