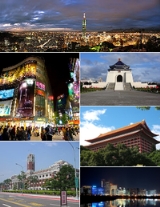 1949    Chinese Civil War: The government of Republic of China moves from Nanking to Taipei.

2003    The pinnacle is fitted on the roof of Taipei 101, a 101-floor skyscraper in Taipei, allowing it to surpass the Petronas Twin Towers in Kuala Lumpur by 50 meters (165 feet) and become the World's tallest highrise.

2005    The first direct commercial flights from mainland China (from Guangzhou) to Taiwan since 1949 arrived in Taipei. Shortly afterwards, a China Airlines flight lands in Beijing.

2005    The Taiwanese government calls on 1 million Taiwanese to demonstrate in Taipei, in opposition to the Anti-Secession Law of the People's Republic of China. Around 200,000 to 300,000 attend the demonstration.

2007    Taiwan opposition leader Ma Ying-jeou resigns as the chairman of the Kuomintang party after being indicted by the Taiwan High Prosecutors Office on charges of embezzlement during his tenure as the mayor of Taipei; Ma also announces his candidacy for the 2008 presidential election.